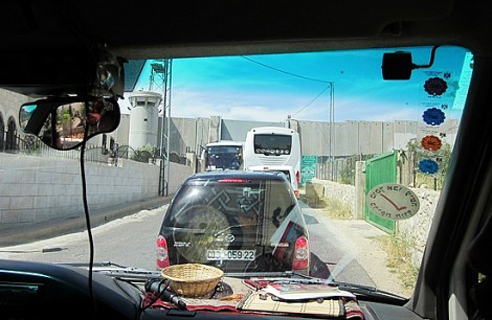 When I was asked if I spoke Hebrew, I answered with a slight laugh, "Only checkpoint Hebrew".

Israelis and Palestinians will undoubtedly go down in history as one of the world’s most bitter arch enemies. To the world, the word “Palestinian” is automatically associated with “Israeli” and vice versa. However, a crazy thing has occurred as a result of both this hostility and of the fact that the two peoples live in such close geographic proximity. In many ways, we know each other better than anyone else.

This thought occurred to me the other day in a taxicab coming back from a west Jerusalem shopping mall. The taxi driver was Jewish Israeli but spoke Arabic (albeit with a heavy Hebrew accent) almost perfectly. When he heard me speaking both English and Arabic to my children, the driver asked me a question I often get: “Where are you from?” Feeling a bit mischievous, I decided to give an answer I knew would pique his attention. “From Palestine.Where else?” I answered.

He was slick, I have to give him that. Barely missing a beat, he said, “Where from Palestine?”

My taxi driver turned out to be polite and didn’t try to “correct” me by saying that Jerusalem was Israel. Only an Israeli would understand that I, as a Palestinian, was making a strong political statement by saying I was from Jerusalem, Palestine, especially since I was speaking to an Israeli.

As the small talk continued, another quirky exchange occurred. “Where did you learn your Arabic from?” I asked. “The army,” he said, probably trying to provoke a response just like I had a moment earlier. “I speak with the same accent as you.”

“Really? You must have served in the occupied territories and learned your Arabic from those you occupied,” I answered, wanting to push the envelope just a bit. He smirked, shook his head and said nothing.

These kinds of exchanges between Palestinians and Israelis are surreal. In any other atmosphere, I would never find myself talking casually to an ex-Israeli army soldier. Moreover, if he was in military garb in my West Bank village I would view him in one light only – my occupier. But being in a taxicab on my way back to east Jerusalem, we were customer and driver and there was room to make sly innuendos that only an Israeli would understand.

“Al Hamdullillah” said one Israeli journalist during a workshop in Italy after finishing his meal, using the common expression of Palestinian Muslims. “Thanks be to God.” In the same conversation, when I was asked if I spoke Hebrew, I answered with a slight laugh, “Only checkpoint Hebrew. I know things like ‘Go’,  ‘Show me your ID card’, and ‘It’s closed’.” This made the Israelis at the table smile uncomfortably but laugh with the crowd all the same.

Such anecdotes illustrate the highly entangled relationship between Israelis and Palestinians. First and foremost, we are “enemies”, the oppressed and the oppressor, occupied and occupier. All other expressions of the relationship are overshadowed by this fact. But we are enemies whose paths intersect and overlap to the point that we know how to “push each other’s buttons”. Israeli soldiers understand how to drive a Palestinian man over the edge by insulting his wife, mother or sister, using Arabic curses. Palestinians have also learned key Hebrew curses, which they use at the exact moments to send Israeli soldiers into a rage.  In public international forums, Palestinians and Israelis can sit at the same table, eating hummus Arabic-style by scooping it up with a bite-sized piece of bread. But once the familiar gesture turns into a conversation, they butt heads because Israelis claim hummus as their own food (disregarding the fact that not only Palestinians but Jordanians, Lebanese, Syrians and pretty much all Arabs have been eating the food for centuries, way before Israel was even created).

If peace ever does prevail, Palestinians and Israelis will have no problem getting acquainted. Once the Palestinians are settled in an independent, sovereign Palestine and the occupied/occupier relationship is put to rest forever, the familiarity between the two peoples will come in handy when the neighbours need to settle normal affairs between states. Saying I am from Jerusalem, Palestine will become a mere stated fact rather than a political statement said to an adversary.

But we have a long way to go before then. Right now, conversations like the one I had with the taxi driver will remain just that. A seemingly light exchange with tense political undertones between people on opposites sides of a bitter divide.

Joharah Baker is a writer for the Media and Information Programme at the Palestinian Initiative for the Promotion of Global Dialogue and Democracy (MIFTAH).