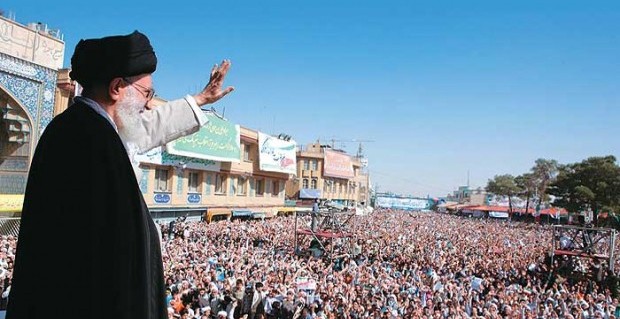 Early returns in Iran’s 9th parliamentary election since the 1979 revolution show that Ahmadinejad’s lay populists have taken a drubbing, and that hard line supporters of clerical Supreme Leader Ali Khamenei are ascendant. Ahmadinejad’s sister, Parvin, who stood for election from their own hometown of Garmsar, was defeated, a major blow to the president.

Western reporters keep saying that the parliamentary results have no implication for Iran’s nuclear program. But they only say this because they either don’t pay attention to what Iranian leaders actually say, or discount their statements as lies (treating them much less respectfully than they treated notorious fraud Andrew Breitbart in their fluffy obituaries last week).

A week and a half ago, Khamenei gave a major foreign policy speech in which he said,

““The Iranian nation has never pursued and will never pursue nuclear weapons. There is no doubt that the decision makers in the countries opposing us know well that Iran is not after nuclear weapons because the Islamic Republic, logically, religiously and theoretically, considers the possession of nuclear weapons a grave sin and believes the proliferation of such weapons is senseless, destructive and dangerous.”

Now, you could maintain that Khamenei is lying when he says he holds that possessing nuclear weapons is a grave sin. (You could also maintain that the Popes are lying when they say using birth control is a grave matter, but you’d have to explain why they put their papal authority on the line for a lie they weren’t forced to utter). But even if you think it is a lie, you have at least to report what he says. I guarantee you that Khamenei’s speech opposing nukes was not so much as mentioned on any of the major American news broadcasts.

Khamenei has also repeatedly said that Iran has a ‘no first strike’ policy, that it will not fire the first shot in any conflict.

And if you hold that Khamenei, as a leading clerical authority, is being dishonest on this issue, then surely you should offer some proof. Perhaps he has flip-flopped over time? But no. Here is Khamenei in 2010:

““We have said repeatedly that our religious beliefs and principles prohibit such weapons as they are the symbol of destruction of generations. And for this reason we do not believe in weapons and atomic bombs and do not seek them.”

I could go on providing the same sort of quotes going back years.

It seems to me that one implication of pro-Khamenei hard liners dominating parliament is that the Supreme Leader’s authority has been enhanced. And he is deploying his authority to forbid the acquisition of a nuclear warhead.

Warmongers attempting to drag the United States into yet another ruinous (or, rather, infinitely more ruinous) war in the Middle East have typically focused their propaganda on the person of President Mahmoud Ahmadinejad. The president, now nearing the end of his second and last term, is easy to ridicule and easy to demonize, because of his quirky personality and colorful gaffes. He has been called a “Hitler” by Rick Santorum, and the Neoconservatives depict him as a madman bent on bringing the world to an end. (Ahmadinejad, unlike most establishment Shiite clerics, thinks that the Muslim promised one or Mahdi will come soon, and this millenarian belief has been taken advantage of by Neocons, who inaccurately allege that the belief could push the president to support apocalyptic policies.) It has been alleged that Ahmadinejad is a mass-murdering hard liner, seeking nuclear weapons with which to destroy Israel.

This puzzling emphasis on Ahmadinejad comes despite the president’s relative lack of power in the Iranian system. The commander in chief of the armed forces is Supreme Leader Ali Khamenei. Who sets nuclear policy? Ali Khamenei. In Iran, the “president” is more like a vice president (think Joe Biden) than a real executive.

Ahmadinejad could not even fire an intelligence minister (Haidar Moslehi) he disliked last spring. Khamenei reinstated him. Ahmadinejad sulked and wouldn’t attend cabinet meetings for a while, but eventually got over himself. Hitler indeed.

Just last month, even the old parliament voted to make Ahmadinejad appear before the legislature to explain his economic policies, the first time a president has been interpellated by parliament in the Islamic Republic. Some in parliament have even spoken of impeaching Ahmadinejad, which they’d be in a position to do after these elections.

So, to conclude: Ahmadinejad is not very much like Hitler. He can’t give an order to the Iranian military independently of Khamenei, who can over-rule him at will. He can’t make his own pick of cabinet ministers, and so can’t build up an independent power base. He has been threatened by parliament. His party lost the 2012 elections big time. His own sister couldn’t win a seat in their home town. He is a lame duck. So there is no point in demonizing him, or pretending he has an atomic bomb, or that he would be the one to deploy a bomb if Iran possessed one, which it does not.

For the Neoconservatives, the jig is up.

Khamenei’s hand has been significantly strengthened. And he has signalled to the Iranian people yet again that he won’t use that strength for belligerent purposes or to pursue a nuclear warhead, which the Iranian ayatollahs consider a tool of the devil– since you can’t deploy it without killing large numbers of civilian non-combatants.

That these developments can be commented on in Western media without Khamenei’s speech being mentioned or it being noted that he strongly opposes nukes is baffling.