‘Show of Force’ By Islamists in Morocco 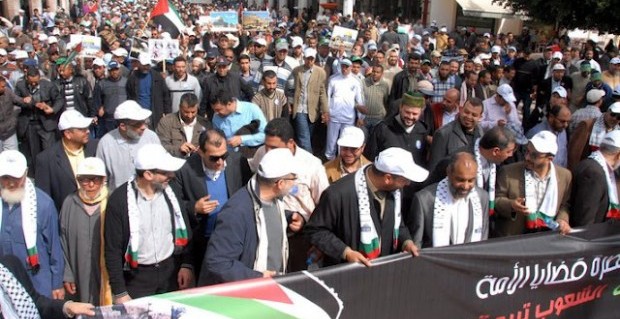 Tens of thousands of Moroccans staged a pro-Palestinian march in Rabat on Sunday 25th in a show of force organised by an Islamist group seen as the main opposition to Morocco’s monarchy. According to a Reuters reporter in the Moroccan capital, at least 40,000 people joined the march called by Al-Adl Wal Ihsan (Justice and Spirituality). A senior police officer put the number at 11,000 while organisers said 100,000 had turned out.

It was Al-Adl’s first march since December when it pulled out of pro-democracy protests, inspired by Arab uprisings elsewhere and aimed at forcing the Arab world’s longest-serving dynasty to become a constitutional monarchy.

Morocco has not had a revolution of the kind seen in Egypt, Libya or Tunisia. King Mohammed VI is still firmly in charge after he offered to trim his powers and allowed moderate Islamists to lead the government after their Justice and Development Party (PJD) won an election in November.

Ali Anouzla, a political analyst and editor of Lakome.com news portal, said Al-Adl sought to send a message to Moroccan authorities that they remained a force to reckoned with, even after withdrawing from the pro-democracy protest movement.

Al-Adl is seen as Morocco’s biggest and best-organised Islamist group. It is active mostly in universities and in helping the poor, but is banned from politics due to what is seen as its hostile rhetoric towards the monarchy.

“We have always been active on issues that touch the heart of Moroccans. While we protest here in support of Palestine, members of our group continue to be persecuted and jailed by authorities for their activism on local issues,” he said.

Morocco has been a broker between Israel and Arab countries and established diplomatic ties with Israel in 1994. In 2000, Rabat froze ties with Israel after violence intensified in the Israeli-occupied territories.

One Response to ‘Show of Force’ By Islamists in Morocco