‘Shock’: Crowds Line Up in Support Of An Arab Government 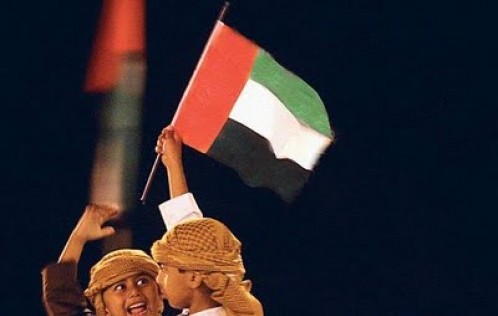 It’s already clear the United Arab Emirates is going to go crazy apeshit over the 40th National Day. Flags are decorating many of the bigger houses around and the race is on to see who can drape the biggest flag possible on their building. Pennants are fluttering in the warm winter breeze, sparkling lights are festooning hotels, tower blocks and residences and there are a growing number of cars in evidence wrapped in stick-on National Day themed patterns.

It’s not even happening for another ten days. UAE National Day takes place on the 2nd December each year, but this year’s celebration of forty years of founding of the nation – as well as independence from ze Breets – is clearly going to be very big indeed. Cynics might say the government is pumping things up a little – a touch of patriotic loyalty is only to be encouraged in this year of the ‘Arab Spring’, but this will be my 18th National Day and I can assure you the nationalistic pride and annual displays of fealty by crowds of UAE Nationals parading, celebrating and generally hooning around going mad with silly string and klaxons are truly heartfelt.

It’s going to be interesting to see massive crowds taking to the streets in an Arab country in support of the government and the nation – a unique sight in the Middle East this year, for sure – actually, come to think of it, probably in the world. People all over the place have been taking to the streets to protest governments, from Athens to Oakland we’ve been feted with images of police pepper-spraying and baton-charging their people. I have to confess at being struck by the incongruity of governments lambasting countries like Syria for attacking protesters at the same time as their own police are beating the crap out of citizens peacefully demonstrating just down the street.

However, even the civil defence folks here in the UAE are undoubtedly preparing for problems – last year’s celebrations saw a great many people charging around high as a kite on the excitement of it all and there was even talk of banning the parades because of the risk to life and limb that such a widescale and fervent celebration represented.

It’ll be interesting to see whether the fact that the vast majority of UAE Nationals are proud to be Emirati and proud of their leaders comes through in the international coverage of the event, or whether we’ll be hearing phrases like ‘government sponsored celebrations’ that will attempt to give ‘balance’ to what people on the ground know to be a true, if rare, display of genuine love by a people for their young Arab nation.

One Response to ‘Shock’: Crowds Line Up in Support Of An Arab Government