Return to Bil’in: A Small But Significant Victory 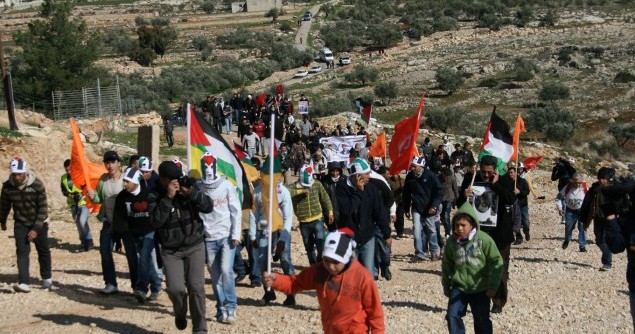 The last time I went to Bil’in was in January 2011 for a frightening, exhilarating tear gas filled Friday demonstration against the wall. This time, not only did we arrive on a Wednesday, (no demonstrations), but conditions have changed dramatically, though not barely enough. From Birzeit we headed southwest, past the infamous Ofer Prison in the distance, through stunning rugged, rocky landscape, terraced with silvery olive trees, contrasting dark green figs, up and down ear popping hills, winding through tiny towns with tall thin minnerets, lush fuscia colored bouganvia, mansions built by wealthy US Palestinians erupting from the hillsides. As we approach the tiny town of Bil’in, the Jewish settlement of Modi’in Illit appears like a mirage in the distance, a haze of tall apartment buildings dominating miles of hilltops. This is as close to a pilgrimage as I get.

We are met by Iyad Burnat, the brother of the man featured in the recently released film, Five Broken Cameras. Smart, focused, handsome, and deeply committed to nonviolent civil disobedience, he takes us through the area of the previous demonstrations, now littered with tear gas cannisters and other military detritus. His young daughter gradually warms up to her latest guests, smiling for photos, and holding onto her father. Ironically Caterpillar bulldozers are rebuilding the terraces and farming areas that were destroyed by the previous wall, ie, the high security fence, sensors, and military roads. This was built to separate the town of Bil’in from the rapidly expanding settlement of Modi’in Illit, simultaneously stealing much of the land belonging to the village.

In some strange way this feels like sacred space, where unarmed men and women, local villagers and internationals, famous leaders and unknown teenagers, people chanting, singing, yelling, beating drums, waving flags, faced down one of the most powerful, aggressive military powers in the world and won a small significant victory. Now that the wall has been taken down, I see a playground with brightly colored slides and climbing structures, near completion by the side of the road. Such dangerous terrorists these villagers! Imagine building a playground. What will they think of next? What a strange mix of bizarre and extreme. What an immense tragedy for the Palestinians fighting this battle and for the soldiers so brutalized that they are able to fire and beat and tear gas and violate unarmed civilians: just following orders.

While Iyad described the popular struggle, the violent response from the Israeli military, the horrific cost to the villagers and their families, I walked along the current wall, this one concrete with double rows of wide loops of barbed wire beside the off limits military road. The cranes from Modi’in were easily visible over the wall, the struggle is far from over, the land grab continues all over the West Bank.

Filled with emotion, horror, encouragement, we gather in Iyad’s living room, meet his four friendly children and gracious wife serving thick Arabic coffee followed by painfully sweet tea. They have spent seven years building this house and recently moved in. He turns on the VCR and we find ourselves watching Five Broken Cameras, reliving the stories, the violated landscape, the spirited villagers,the brutality of the soldiers. It is surreal and almost too painful to bear.

The conversation afterwards, however, is powerful and inspiring. Iyad is focused on teaching and building a nonviolent movement for civil action throughout the territories. Other villages are joining the struggle. He will be touring with the film in the US shortly. He is absolutely clear that he is not fighting the Jews, he is not fighting for a few more dunams of farm land, he is fighting the occupation. He is not only doing this for himself, but for his four children who have grown up tasting tear gas and fearing Israelis. He is determined to create a better life for all of them.

One Response to Return to Bil’in: A Small But Significant Victory