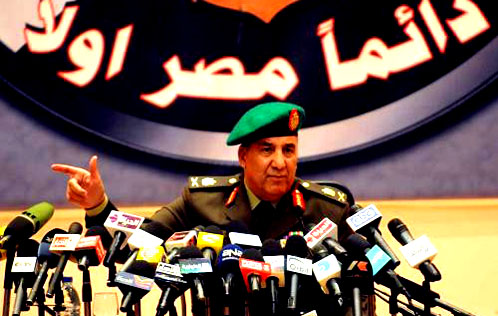 I will not write about the scenes of brute force used by the military against protesters last week.

I will not write about the woman who was dragged, stripped and viciously clubbed and stomped by a mob of at least 10 uniformed thugs in a scene that has shocked the world.

I will not write about how the 200-year-old Institut D’Egypte was left to burn for hours before the historic building almost collapsed and its invaluable manuscripts were reduced to ashes.

I will not write about the systematic humiliation and degradation of the Egyptian citizen which started back in March, less than one month after the “regime” was toppled, claiming over 100 lives and over 2,000 injured; and subjecting some 12,000 civilians to military trials.

But I will write about the SCAF-led conspiracy against Egypt’s revolution.

It started on Feb. 11, the day the Supreme Council of the Armed Forces usurped power from Tahrir Square in a carefully orchestrated coup against both the Mubarak regime and the Egyptian people; the millions who were duped by a General’s televised “salute” to Egypt’s martyrs.

The chronology of events since then has been one long reconnaissance mission paving the way to a pre-planned scenario that would see the uprising crushed by its first anniversary, not necessarily through direct violence against those who have refused to be silenced, but through the more insidious strategy of smear campaigns, incitement, intimidation, fear-mongering and propaganda that would set Egyptians off against each other.

SCAF is engaging in highly proficient psychological warfare, complete with leaked reports of a grand conspiracy concocted by “external elements” and their “internal allies” to ruin Egypt on none other than Jan. 25, 2012.

According to news reports, the conspiracy aims to start another revolution (implying that the first one is complete) through deceptive calls for peaceful protests (a stab at the non-violent uprising that toppled Mubarak and is now calling for toppling SCAF) spearheaded by the losers in parliamentary elections (some 5,000 of them) and the hoodwinked youth activists. The alleged plot aims to provoke confrontations between protesters and the army, to fuel chaos and civil strife to be used as a pretext for foreign intervention and a way to impose guardianship over Egypt.

The plot, which was leaked by a senior security official who has monitored communications between those internal and external enemies, can only be achieved if there is an open sit-in and clashes claim more lives (direct incitement against anyone who calls for organized street action).

Even though this cartoonish scenario with all its pathetic detail is an insult to our intelligence, it has unfortunately fed into the natural existential fears of a population still reeling from colossal events that have upturned their lives.

This is a classic distraction strategy whose sole aim is to further fragment the public over the best way forward and to continue propping up SCAF and the military institution as the final fort of stability whose criticism will, come January 25, become tantamount to high treason.

The “high level security source” elaborately delineated the complex threats to Egypt’s security and sovereignty, but barely hinted at the measures taken to fight them, offering only vague statements that the “state will take all the necessary precautions to protect public property and the lives of Egyptians”, measures which SCAF has over the past 10 months proven summarily incapable of implementing without committing gross human rights violations.

Even if the plot against Egypt was real, SCAF’s performance so far has been one disappointment after the next, adding insult to injury by blaming “invisible hands” which they have failed to produce despite countless investigations, casting a shadow over the military’s ability to deliver its grand promises.

In North Sinai, where there are no anti-SCAF provocateurs, the military failed to foil 10 (not one or two) sabotage attacks on gas pipelines to Jordan and Israel. On Oct. 9, 27 mostly Coptic protesters near Maspero were killed, 12 of them crushed by armored personnel carriers, who, the military prosecution has claimed were manned by the “invisible hands” who attacked the soldiers, stole their vehicles and crushed the protesters to drive a wedge between the people and the army, conclusion, the soldiers cannot even protect their own vehicles. On Nov. 19 the military police distanced itself from the decision to violently disperse a sit-in by a small group of martyrs’ families, which led to the killing of 45 people, even though live coverage showed that both military and police were confronting the protesters.

And recently in a SCAF press conference, General Adel Emara cut it short by claiming that SCAF never even gave the order to disperse the Cabinet sit-in before embarking on a propaganda campaign against the “thugs” who were lobbing Molotovs and hurling abuse at the soldiers. Did Emara actually say that there is insubordination in the army, that some soldiers have taken matters into their own hands during confrontations where 17 people were killed, 14 of them with live ammunition?

Can we trust an army with no clear chain of command? A military junta whose hierarchical structure is so blurred it depletes accountability?

It is inevitable that with SCAF’s systematic mismanagement of the transition, their persistence to remain a state within a state (the defense ministry even recently “lent” the finance ministry $1 billion!), the non-violent nature of protests will be compromised.

Youth activists are on the brink of radicalization, but not because of a conspiracy they are hatching up with foreign enemies to ruin Egypt, but because of the violence to which they have been regularly subjected for no other reason than practicing their legitimate right to express their opinion and frustration and to hold those in power to account.

What SCAF did not take into consideration while deploying its “Clockwork Orange”-style conditioning scheme, was the vigilance of the new Egyptians. Even though they may be a minority, they are one that will not be silenced.