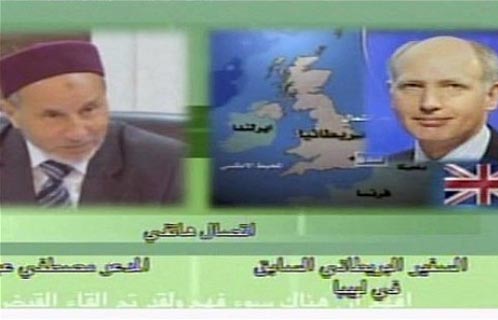 I woke up this morning to the stunning news that Colonel Muammar al-Gaddafi’s forces had “cleansed” Libya from the “gangs” and al-Qaeda operatives, reaching as far east as Benghazi and even Tobruk near the Egyptian border.  Being a child of June 1967 I was quickly reminded of the outlandish claims back then by Egypt, voiced by one Ahmed Said on Nasser’s Voice of the Arabs radio, that it was routing Israeli forces in the air and on the ground and that the liberation of Palestine was at hand.

Of course Gaddafi would do no such thing.  The offensive launched by his forces is obviously aimed at retaking the regime’s vital lifeline near Gaddafi’s stronghold of Tripoli: oil facilities.  Hence the vicious assault on Zawiya which, if successful, would secure the Libyan colonel’s western flank and help guarantee him a continuing supply of petro-dollars.

You see, no one has suggested yet that sanctions be imposed to deny him revenue from exporting Libyan oil so Gaddafi is actually still being paid!

The rebels fought back with everything they have because they know that this isn’t just about oil.  Gaddafi’s forces will exact terrible retribution on those who dared to rise against the colonel.

Gaddafi needs the oil facilities near his last remaining bases, the triangle Tripoli, Sirt (Surt) and Sabha (see map below).  Which is why he may try to assault Zawiya and Misrata again and again as long as his forces don’t get mauled.Also of interest is the news that some British SAS soldiers have been captured by the rebels.  I found out around 23:00 GMT last night while watching Libyan TV, hours before the news was reported anywhere else.

You see, Gaddafi’s regime still controls and monitors the phone network in the country and lo and behold there was last night a recording of a phone call between the British ambassador to Libya (now in London) and Mustafa Abdul Jalil, Gaddafi’s former Minister of Justice who broke with the regime and is now probably the most prominent opposition figure in the country.

That was preceded by several phone calls between Mustafa Abdul Jalil and Ahmed bin Halim, a Gaddafi opponent and former Libyan prime minister.

Both the British ambassador and bin Halim asked Abdul Jalil to intervene to release a group of 4 (later reported as 8) British “diplomats” captured by the rebels.  Abdul Jalil, who doesn’t speak much English, handed the phone to someone (obviously senior) called Juma’a who told the ambassador that these British guys landed in Libya in a helicopter and were subsequently captured and were being interrogated.  [They were found carrying guns, explosives, maps and passports from four countries! Not British diplomacy’s finest moment.  Nor the SAS’ whose operation this was.]

A quick note about the modus operandi of special forces worldwide; they are usually helicoptered in and lie in wait, well hidden in the local environment, for days, weeks, sometimes months.  They monitor movement, lines of transportation and any target they may be reconnoitering, in constant touch with home base.  And when called upon they spring into action.

While Libyan TV broadcast these intercepted phone calls to show Gaddafi’s opponents in a negative light, to their credit the rebels considered this act by the British a violation of Libya’s sovereignty and promptly locked them up.  I mean if you’re coming on a friendly visit you call ahead and say you’re coming, you don’t just show up announced.  On a helicopter bearing guns not gifts!

The opposition is naive if it thinks it can use Gaddafi’s phone networks to discuss travel plans, weapons requirements and other sensitive matters and not have the Brother Leader display fraternal concern and eavesdrop on the conversation.  The opposition needs an Opposition 101 crash-course.  Pronto.

One Response to Gadaffi Goes for Oil, Opposition Naivety Revealed