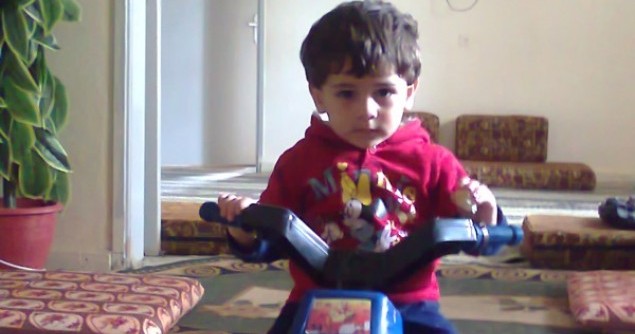 My two-year-old nephew Omar had been confined to a small apartment with six other screaming children and their families when Israel began its recent bombardment of the Gaza Strip.

Shortly after a ceasefire was announced on Wednesday, he and his parents returned to our family home in Bait Lahia. My mother, who I spoke to over the phone, said that the first thing that Omar did was rush up the stairs in search of his most prized possession: his bike.

“I wish you were here to see his face when he found it,” she said. “It’s like he discovered one more reason to live. He wouldn’t stop riding it back and forth in the living room.”

I tried my hardest to hold back tears as she and other members of my family recounted the terror they faced as Israel, once again, targeted Gaza’s civilian population.

Omar, like other Palestinian children who’ve lived through war, suffers from trauma. Loud noises and the sound of airplanes flying overhead set him off.

The moment he starts crying, my mother reminds him to “pray for us”. He responds by raising his little hands toward the sky and begging “Ya Rab” – or “Help us God”. He then buries his face in my mother’s arms while waiting for his own mother to console him. She’s often busy trying to calm his 10-month-old sister.

“We had four new mothers in the house, and each of them slept next to her child,” my mother told me. “Your sister-in-law Amani covered her one-year-old boy with her own body to protect him from harm.”

Omar has just witnessed his first Israeli war and his family wishes this would be the last war they would ever have to see again, but even the most delusional among them knows this would be asking for too much.

Majid, my younger brother, was tasked with making grocery runs for the entire family. His apartment, which is usually home to six, served as a refuge for 25 people during Israel’s deadly siege. Half of those camping on his living room floor were children.

He confided to me that it wasn’t easy supervising that many kids at once. One of my nephews, who is in the first-grade, somehow managed to escape into the open street and was nearly hit by a speeding ambulance – not once, but twice.

Mazin, my oldest brother, quickly became restless. He packed a hookah and set up camp in his closed store – where he remained the duration of the siege. He’d periodically check on his three young adult sons to make sure that they weren’t putting themselves in harm’s way. But he admitted to me that “sometimes harm comes your way no matter what you do”.

As he spoke, I could tell that his mind was burdened with sadness over the massacre of the Al-Dalu family. Israeli missiles had targeted their home, killing 11 family members – including four women and four children.

Amaal, my aunt has seen a flare from a rocket fall near their home and she thought this would be the end of her and her family. And ever since that incident she has not been the same. Her family is contemplating seeking professional help as Amaal has trouble sleeping and experience severe nervous breakdowns. But as of right now, they have put their home up for sale. Sadly, their home was their ticket out of their refugee camp where they were born, but now they feel they are being pushed ever closer to the refugee camp for their own imagined safety.

During all of this, my niece Walaa began her new life as a married woman. Her in-laws had planned to throw a lavish wedding celebration, but were forced to cancel after Layalina, the reception hall they had booked, was destroyed in an Israeli strike.

Her mother-in-law explained, “You make my son’s life worth living, but a large gathering is unfeasible and just too risky right now.” Their neighborhood was grim with so many recent deaths that it wouldn’t have been much of a party anyway.

Walaa did not protest. She let go of all her childhood fantasies for a dream wedding and quietly moved in with her new husband. Ironically, she had requested that fireworks be shot into the sky on the night of her wedding.

Still, Walaa – like the rest of my family – is thankful to be alive. Other Palestinians were not so lucky.