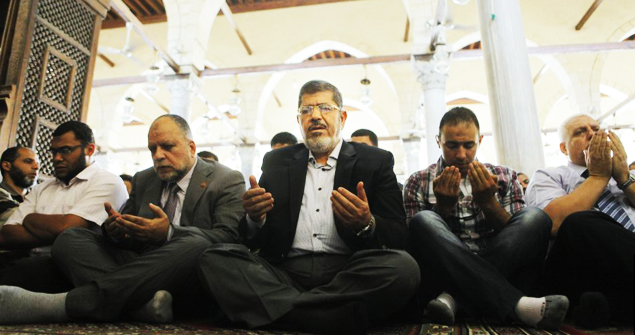 Mohammad Mursi’s dramatic victory in Egypt’s presidential elections means that the governments of the Gulf Cooperation Council (GCC) are in the astonishing position of having to work with a Muslim Brother. This will be very hard to handle as security forces in all six states have been working hard to keep the Islamists out of their territories, seeking to limit their social and religious influence on their populations.

Occasionally, the silent struggle has become public. For example, in the past few months, several leading figures in the GCC were outspoken about the Muslim Brotherhood’s attempts to build influence on their countries. This attitude is indicative of general GCC suspicion of the Muslim Brotherhood’s political aims, as well as religious disagreement on interpretation of Islam.

But Mursi is now President of Egypt and as such he is an important part of the Arab world and will have to interact frequently with the Gulf states at all levels. Egypt is the largest Arab nation and now that it is free of Hosni Mubarak’s slavish following of every American dogma, it will recover its traditional lead in formulating Arab answers to regional questions.

But just as the GCC government will have to get used to working with a Muslim Brother, so will the new government in Egypt need to work with the GCC.

Mursi and his new prime minister will need to prove to the GCC that he does not have any intention of destabilising the Gulf regimes. Many people remember that an earlier government in Egypt, under Jamal Abdul Nasser, had wanted to spread its doctrine of Arab nationalism, promoted revolutionary fervour throughout the Gulf and sent Egyptian forces to back the republican side in Yemen, leading to the downfall of the hereditary ruler. And memories of this slice of Egyptian history have been backed by far more recent active Brotherhood infiltration of the Gulf.

So developing a good working relationship with the GCC states will be an important test of Mursi’s commitment towards changing the Muslim Brotherhood’s agenda of achieving change by stealth, to a more open and democratic style of politics, which will allow all Arabs to work with his government for the general betterment of the region.

In addition, Mursi has a major domestic struggle on his hands as he seeks the essential, wide, popular support that he will need to successfully challenge the generals in charge of Egypt’s armed forces, who have used the past year-and-a-half of political turmoil to grab whatever power they could. As soon as the army was given interim authority after the Arab Spring early in 2011, the Supreme Council of the Armed Forces (Scaf) gave the armed forces immunity from presidential or parliamentary oversight and independence to run its own budget.

Earlier this month, Scaf went a lot further when it granted itself new authorities and declared that it would appoint the members to the new constituent assembly, which will write Egypt’s new constitution and that it also had the right to introduce legislation (separate from parliament or the president). In addition, Scaf ordered the Constitutional Court to dismiss the democratically elected parliament dominated by Islamist parties.

As Egypt’s Islamists and military establishment prepare to face off, they both know that history is on the side of the Islamists. The highly organised Muslim Brotherhood and their Salafist allies have captured the powerful popular Egyptian desire for change. Even if the Islamists stood aside from the first protests of the Arab Spring, as secular liberal outrage against decades of military rule spilled onto the streets, what has resulted is a Muslim Brotherhood President appointing Egypt’s first civilian cabinet since the revolution of 1952.

It may be that Scaf is ready to give up some of its new legally stolen powers. It may be that the generals have planned how to arrive at an agreement with Mursi and grabbed these extra powers so that they can be used as bargaining chips.

But their actions have been so blatantly self-serving that they cannot be defended in any appeal to the people. It will be Mursi’s greatest test to use that failure by the generals and to build a wide political consensus for a new and inclusive Egypt. The generals cannot make the same appeal to the people and Mursi will have only himself to blame if he allows sectarian aspirations to knock him off course.