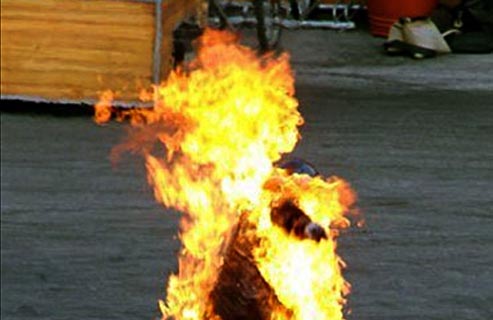 The story of the Tunisian Revolution has swept the Arab region, and so has the legend of  Mohamed Bouazizi.

Thus far, four Algerians and an Egyptian and a Mauritanian each have lit them selves on fire in protests meant to recall Bouazizi, the young man whose self-immolation inspired the Sidi Bouzid uprising.

Bouazizi was twenty-six years old and unemployed. Yacoub Ould Dahoud, the Mauritanian who imitated Bouazizi’s act more recently was a forty-year old from a well off family.

He lit himself up in front of the Presidential Palace. A Reuters report claims his grievance was “alleged government mistreatment of his tribe.”

Ould Dahoud’s long Facebook message posted before the deed makes no reference or claim about his tribe being wronged (it begins “[. . ] no to the rule of tribalism … no to the return of patronage.”). He was not protesting his economic condition. He was making a blatant political statement: “a simple citizen demands legitimate rights.”

Ould Dahoud wrote: “Enough corruption! Enough injustice in Mauritania! For fifty years we have suffered from corruption and injustice.” His statement, quoted and paraphrased extensively here, includes jabs at the army, the political elite demanding “the ouster from power of the clique of spoilers from the army” and “a cancelation of all duties and taxes on rice, wheat, [cooking] oil, sugar, dairy and monitoring of the outrageous profits from them” and demanded that anti-slavery activists be released from jail.

His final statement even included a proposal for a constitutional amendments that would ban “current or former” military officers from running or being elected president, among other things. His message implored France: “respect the right of the Mauritanian people to self-determination”. Ould Dahoud addressed his pleas to President Mohamed Ould Abdel Aziz: “if you do not accept these demands, you will face the wrath of the People who will come out just like they came out against Ben Ali.” His cause was for “our children to live in a country with social justice, freedom and democracy.”

This is as activist as one can get. Unlike the copy-cat self-immolations in Algeria (and Bouazizi’s original) there was no apparent spark in his personal life and he was older and better off than several of the other men. Little is known about Ould Dahoud personally, though Mauritanians that crossed paths with him at various stages describe him as “a democrat,” by disposition. It appears he intended to mimic Bouazizi’s “spark” to revolution. His self-immolation will shock many in Mauritania but a Facebook page has already been set up called “Solidarity with Yakoub Ould Dahoud who burned himself for Mauritania,” with enthusiastic users changing their profile pictures to an image of the man burning on the street.

It seems clear that the event has the regime nonplussed, which had a rough time getting outsiders to accept its legitimacy. That some news sites and agencies have buried the story somewhat is not an accident.