Making Sense of Algeria’s Riots: Why, What Next? 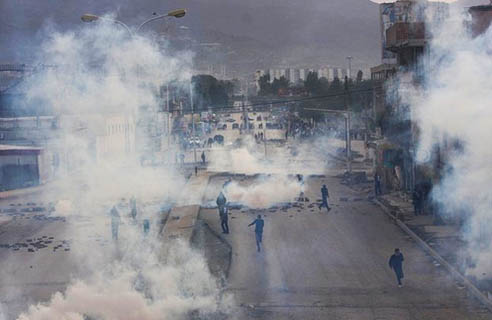 Hugh Roberts, one of the best analysts writing about Algeria in English period. He is one of the few Algeria watchers whose insight spans both the pre and post-1988, bringing insight into the background and substance of Algerian politics whenever he writes. Those interested in contemporary Algerian politics must find his various working papers and reports (from LSE and ICG especially) and the collection of essays in The Battlefield (Verso, 2002) and read them, multiple times. He is due to release a new book sometime in the near future on Kabyle politics, which promises help deepen our understanding of Algeria’s political culture(s). A lecture on Algerian riots may be heard here. His piece for Foreign Policy‘s Middle East Channel should be read in full:

The greater part of Algerian society has been in a permanent state of moral revolt against the regime for the last four or five years. In particular, riots have been a frequent — one might well say a regular — feature of the Algerian political landscape for the last decade, since the massive and protracted riots in Kabylia, the main Berber region, in 2001. Since 2005, scarcely a fortnight has gone by without a riot somewhere in the country.

The immediate motives have varied from case to case but have usually been connected to the state’s failings as a distributive state. In January 2005, numerous communities across the country rioted over the steep increase — in the depths of winter — in the price of butane gas on which households depended for heating. The allocation of new public housing by local authorities has frequently been contested by the unlucky claimants, with angry demonstrations, accusing mayors of nepotism and corruption, often turning into bitter affrays. At other times, many villages and even entire municipalities have rioted as the last resort, having despaired of attracting the regional authorities’ attention to their particular, long-neglected needs, whatever these might be (water supply, electrification, repair of the only road, a decent school or clinic) by more orderly procedures.

What all these forms of riotous assembly over the years have had in common is the visceral refusal of la hogra — the arrogance and contempt with which the authorities at all levels routinely treat ordinary Algerians. At the same time, these varied resorts to direct action have universally expressed the Algerian public’s disenchantment with the political parties and institutions established since the introduction of formal political pluralism in 1989. Public opinion long ago concluded that these formal institutions have nothing to offer them, that the last thing they can expect is for the deputies in the National Assembly, of whatever party, to represent them to any effect — first because the parliament has no real power, and second because deputies’ elections depend on their position in party lists in vast constituencies and in the circumstances are effectively insulated against the exasperation of their own electors, and are under no pressure to do anything for them. So the Algerians in their majority have learned the hard way that direct action — making a nuisance of themselves to the authorities in one way or another — is the only tactic that works. And rioting has accordingly become both a running popular commentary on the political status quo and the spuriousness of its pretensions to be a modern state (let alone one animated by democratic principles and subject to the rule of law) and a way of getting things done and thus, ironically, a kind of buttress of the same status quo insofar as this kind of local-level, single-issue rioting is manageable and has become routinised.

What is important about the events of the last few days, therefore, is that we have seen the national proclivity to riot taken to the next level. In place of serial rioting, the Algerians have managed to riot all over the country virtually simultaneously. The speed with which the movement spread from the first incidents in Oran and Algiers on Jan. 5 has been very impressive. This is, among other things, an index of the existence in Algeria today of a genuinely national consciousness, however threadbare and vacuous the official ‘nationalism’ of the governing elites. But it has also had ominous implications.

At this point the eventual political outcome of this national dust-up is quite unclear. The government on Saturday announced measures to get the price rises cancelled, which scratches only the surface of the problem. It has already been relying on the imams (religious leaders) to calm things down and may well seek to avoid taking any political initiatives, because it is probably incapable, as things stand, of envisaging a deeper reform of the sort that is definitely needed. But it should be noted that the rioters virtually everywhere have proved incapable of articulating intelligible political demands and have been acting in radical disconnection from Algeria’s political parties, but also — unlike the Tunisian protesters — without any links to or help from the trade union movement or other organized associations.

The first paragraph highlights something that must be understood in order to put the latest riots in their right context: Algeria has been on a low boil for the better part of the last decade.

Riots did not “spread” into Algeria from outside and they are not a mere function of global food prices. They come out of the general background of North African politics and Algeria’s particular variety of exclusivist politics.

Amel Boubekeur has written in similar terms. The fact that the elite has basically become accustomed to and somewhat expert at managing riots as a fact of life shows how distinct the divide between popular and official life have become (and remained) in Algeria. This is also highlighted by the way trade unions (official and semi-official youth organizations have been in the same camp), as mentioned in the previous post here, have condemned and stood apart from the revolt.

Many Algerians today feel just as their parents and siblings did in 1988: there are two castes in the country, the official and the unofficial. The official class — the party and union bosses, the interested bureaucrats and technocrats, the religious “authorities,” the police and army officers, the television and radio networks, the co-opted political and religious opposition and the other enforcers of regime control — are aware of the country’s deep crisis.

But the political class, generally, has been ineffective in providing leadership beyond crisis management. One still hears some elites (old and often young) complain about how “the Algerians today” lack “vigor” or “patriotism” or “knowledge of real struggle” rather than “we have no vision” or “we have failed” — the essence of hogra. Their self-perception is frequently one of  entitled duty. Many of them mean well but cannot break through. Others are hungry simply power hungry and avaricious.

The non-official Algerians feel they have no agency in encounters with official people. They feel cheated by politicians and big business and their greedy children — the tchitchis. They claim as their own the mudjahidine who rose up in the liberation war and then went back to their lives as workers, farmers and other ordinary things rather than becoming ministers, money launderers and barons. They may or may not be educated, they may be civil servants or conscripts or hittistes, but they are convinced that the state rolls over them like a bulldozer and rolls out wealth and opportunities for the corrupt and the complicit.

These are the Algerians who freeze to death in the mountains while searching for fire wood, the eleven-year-old shepherds, the men paddling their way to Europe with nothing but jugs of water, miniature Qur’ans and their comrades for sustainment and who dehydrate or drown along the way, the young people who smash the windows shops they cannot afford to browse in and banks that eat their grandparents savings.

These people feel let alone and let down. They have had enough leaning on the walls along the road and being harassed by police or plain clothes security personnel because they have nothing else available for them. They are frustrated that they might be forty by the time they leave their fathers’ houses. They would resolutely dispute Al Jazeera‘s utterly bizarre claim (curiously made in more than one article): “Algeria is now a democracy, but [. . .]“.

There is no democracy here, they might yell. And they want something done about all. Roberts is right that there has not been a unified political direction coming from the riots but there have instance of youth marching on municipal assemblies and town halls demanding that mayors and the government resign or be dissolved. The big theme seems to be “We’ve had enough,” but question remains “What will you do?” There is a serious risk, for the youth, that these riots will turn out as a just another tantrum.

The authorities seem intent on not inflaming the discontent to a point where the state is overwhelmed by its people or where some element in the regime, be it the security services, the army or some other, sees an opportunity to assert its own priorities setting the country into some horrible spiral as did the response to the 1988 events.

The great government’s great contradiction comes in the official response, though:

Certain senior regime figures, in admonishing the rioters for their violence (stoning passing cars and the police, looting offices, ransacking public agencies, etc.) have called on them to “demonstrate peacefully,” apparently forgetting that the State of Emergency in force since 1992 expressly forbids public demonstrations of any kind and that such peaceful demonstrations as have been staged — by Algeria’s teachers, by the mothers of the “disappeared” — have been regularly dispersed with sickening brutality. The Algerian League for the Defence of Human Rights (LADDH) has called for the repeal of the Emergency Law, as has the Socialist Forces Front (FFS). But this is only one of the reforms that are badly needed and the failure of the opposition parties to intervene with appropriate demands at this point has been very striking. It is therefore uncertain how this huge outburst of negative energy will be harnessed and exploited politically. That is probably the next chapter in this story and it remains to be written.