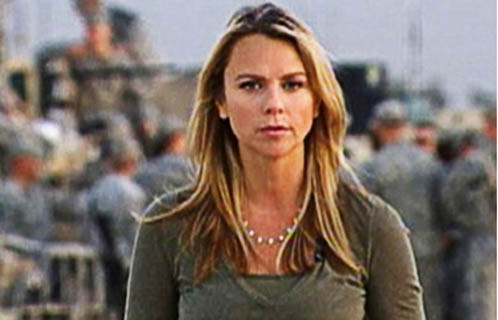 Like countless victims of sexual assault before her, the blame was heaped on Logan herself – for being attractive, and for putting herself in that environment.  Reactions of conservative commentators like Debbie Schlussel, who not only blamed Logan, but also blamed Islam, were hardly surprising.

However, reactions like that of reporter Nir Rosen, admired by left-leaning progressives, who trivialized the horrific attacks on Ms. Logan by tweeting that he is  “rolling [his] eyes at all the attention she’ll get,” starkly demonstrated that misogyny is alive and kicking in all quarters.  For anyone who doubts this, it suffices to compare reactions when CNN reporter Anderson Cooper was beaten while covering the protests in Cairo.

Reactions in Egypt were far more sympathetic (and it was a group of women and army officers who reportedly came to Logan’s rescue and extricated her from the mob).  Some of the activists who had been at Tahrir, like the well-known blogger Mahmoud Salem, condemned the attack, and shortly after the incident, a Facebook page was set up to denounce the assaults.

Many of the activists who participated in the 18-day revolt against Mubarak reacted with a mix of surprise and deflation, for if anything, the atmosphere in Tahrir Square had been, for most, refreshingly free of the sexual taunts and harassment that typify many women’s daily experiences on the streets of Egypt.   Some were quick to suggest that the attacks were perpetrated by pro-Mubarak thugs, and an isolated and extreme example.

Certainly and thankfully, what happened to Lara Logan on the night of February 11, 2011 was both isolated and extreme – for that evening.  But it is hardly the first such incident to occur.  The attack on Logan may very well have been orchestrated by hired thugs.  After all, just a little over a week before Mubarak’s resignation, such thugs had been set loose upon the protesters at Tahrir Square, with several fatalities and hundreds of injuries.

For years, these thugs-for-hire have been a constant feature of protests in Egypt.  On May 25, 2005, a day activists later dubbed “black Wednesday,” during protests held against amendments to Article 76 of the Egyptian Constitution, hired thugs sexually assaulted female protestors, including women journalists covering the protests, while security forces idly stood by and let it happen.  A female activist and friend told me later, “after that day, my parents begged me not to attend any protests anymore.”  The message to women was clear – your gender will be used against you if you choose to participate in demonstrations.

Many activists pointed out that the government’s complicity in the sexual assaults against female protesters only reinforced general societal attitudes towards sexual harassment in Egypt.  When the state appears not only to sanction, but also to sponsor it, is it any wonder that men can get away with harassing women, they asked?

The question was answered in the fall of 2006, when widely-circulated images of roving gangs of men chasing and assaulting women in downtown Cairo during the Eid el-Fitr holiday were met with dismissal, disbelief and derision.  Former First Lady, Suzanne Mubarak went so far as to suggest that such incidents were exaggerated by the media to tarnish the country’s image.

Later, following a survey by the Egyptian Center for Women’s Rights which revealed that the overwhelming majority of Egyptian women had been exposed to some form of sexual harassment, more serious discussions about addressing the issue began to emerge, even in parliament.  However, many felt it was the negative attention such reports were garnering Egypt in foreign media and its impact on tourism that prompted government response, not the indignity that everyday Egyptian women suffered on a daily basis while navigating their way on Egypt’s streets.

All this to say that the attack on Logan must be placed in context: she was attacked, as a journalist, and as a woman, in an environment where such attacks had happened before.

In the days since the attacks, other women reporters like Kim Barker and Sabrina Taverenise, both wrote in the New York Times about their experiences of sexual harassment and assault while doing their job. Both write that it happened in various countries (not just Muslim ones), and both write about the code of silence that female reporters will not break, for fear that it will hamper their careers.

One can only hope that Logan’s case has shed light on the challenges women continue to face as they work and excel in domains traditionally dominated by men.

As for the situation in Egypt, women played an important role in the protests that drove out Hosni Mubarak.  Some were veteran activists, and some had attended protests for the first time in their lives.  Having gotten a taste of what public activism and political participation can achieve, these women are unlikely to recede into the background in the coming months.  The sexual harassment of women in Egypt is not unique to it.  It is not a product of Islam (if anything, I heard that members of the Muslim Brotherhood who were in Tahrir Square were quite vigilant about protecting the space of female protesters).  It is a result of patriarchal attitudes coupled with decades of authoritarianism that stifled open dialogue – not only on politics, but also on religion, culture, gender relations, and nearly ever facet of life.

As these courageous women and men continue to push for an Egypt that is more open, pluralistic and democratic, hopefully the incidence of sexual harassment will decrease and a real revolution – one in gender relations – will occur.

Parastou Hassouri, who teaches international refugee law at the American University in Cairo, is a human rights activist who has been living in Cairo since 2005.

5 Responses to Logan Assault a Symptom of Mubarak’s Egypt