Land Swaps With Palestinians? Israel Doesn’t Have Enough to Swap… 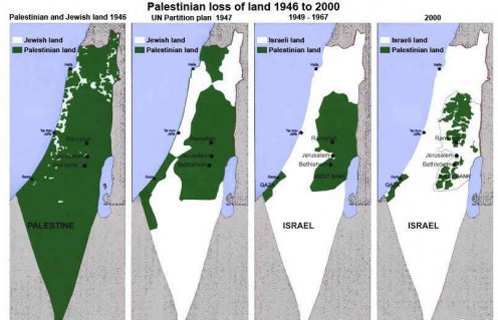 Brilliant reporting by Nathan Jeffay in the Forward, on the question of land swaps. Is there even enough land to swap, per the Obama idea? And what would swapping mean?

There are several issues: There isn’t enough Israeli land to give the Palestinians to make a swap even-steven, hard-core settlers outside the settlment blocs would never leave the West Bank so that ups the percentage of land that would have to be swapped; and then what if “populated” areas are included in the swaps– Israelis moved off land inside Israel to give it to the Palestinians, Israeli Palestinians transferred with their land to the Palestinian state. A recognized idea in Europe, someone tells the Forward. But it does make you wonder about the limits of ethnic nationalism. (Just imagine for one second American Jews being asked to transfer their residency from Massachusetts to New York in order to solidify the Jewish #s in New York…)

Some excerpts from the Forward reporting:

“The solution Obama talked about, one that is “based on the 1967 lines with mutually agreed swaps,” means that Israel would hold on to some settled areas that it captured in 1967 and compensate the Palestinians with land that currently falls under Israeli sovereignty…. But in Israel, many experts say there simply isn’t enough free land under Israeli sovereignty to exchange for them….

[Ehud Olmert] wanted 6.3% of the territories — that is, the West Bank and Gaza — which would keep 75% of settlers in their homes.

But Olmert could make such an offer only because he ignored three principles on which Palestinian leaders insist. The first is that exchanges must be on an acre-for-acre ratio, and Olmert was offering only areas equivalent of 5.8% of the territories. The second is that the land must be what they consider good quality — usually assessed from agricultural criteria — while large sections of what Olmert offered are not easily cultivated. The third is that Palestinians must be compensated acre for acre for the Israeli presence in parts of Jerusalem that was captured in 1967, while Olmert’s calculations discounted Jerusalem….

[And where could the Israeli land come from?]

Of course, the figures are tight only if populated areas are off the table.

Currently, nobody in Israel is suggesting evacuating kibbutzim or small villages populated by Jews to free up space for exchange. But David Newman, professor of political geography at Ben-Gurion University and chief editor of the journal Geopolitics, believes this could change. “It’s only as taboo as talking about land swaps was 15 years ago, or talking about a Palestinian state was 20 years ago,” he said.

Swapping areas populated by Arabs is, however, already an accepted principle by many in Israel.”

2 Responses to Land Swaps With Palestinians? Israel Doesn’t Have Enough to Swap…