Israel’s Moral Crisis is a Palestinian Problem Too 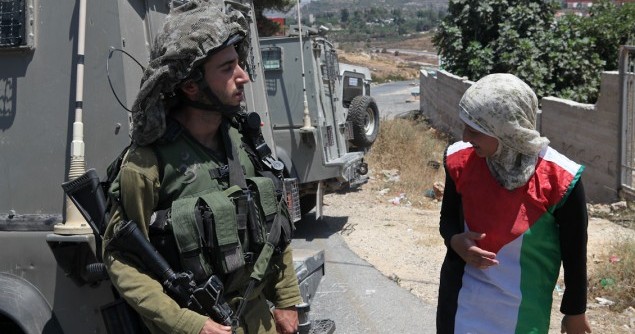 Israel’s moral crisis while alarming to its enlightened citizens, friends and supporters is a serious concern for Palestinians. As my mother has often stated, “When an Israeli child catches a cold, Palestinian children cough”. Most Palestinians understand Israel’s moral well-being and challenges equally impact them. Israel’s practices, attitudes, ethical beliefs and stance spill over and impact on the Palestinians it dominates today as well as the Palestinian who will liberate it tomorrow- well aware when Palestinians’ aspirations for equality and freedom are realized will also liberate their occupiers.

Palestinians recognize that Israel’s complex occupation system operates in a manner that manipulates most Israeli citizens who willingly or unwillingly support and acquiesce in its collective violent abuse of the Palestinians whose territory it occupies. Israel’s policy of occupation relies on its citizens’ trust and faith that their government’s systematic oppression and discriminatory practices of Palestinians is meant to advance and strengthen Israeli safety and maintain its dominance.

The day to day application of Israel’s occupation policies depend on the buy in of the majority of its citizens, officials, and politicians. Israel’s accepted discriminatory occupation policies are well established, evident, visible, and by and large are defined by the policy perimeters it dictates to its IDF, judicial system, social structures and society at large (http://www.haaretz.com/news/features/eight-months-after-bloody-olive-harvest-battle-still-no-justice-in-sight.premium-1.459838).

Few Israelis question their government’s occupation policies; or the impact of the occupation on their societal well-being; and more critically how these institutional policies influence its young. Most have consented to their government’s policies with all that entails including its cadre of illegal violent settlers who for 45 years have exacted a heavy toll on Palestinian farmers, worshippers, school children and non violent protesters (http://www.hrw.org/news/2011/11/21/israel-new-commander-should-protect-palestinians-settler-violence).

Israel’s illegal settlers’ destruction of Palestinian properties and houses of worship; uprooting of olive groves and orchards, fire-bombings of homes, churches, mosques; and more recently the violent attacks on a Palestinian taxi and its young passengers are a daily reality in the Palestinian Occupied Territories (http://www.huffingtonpost.com/2012/08/17/palestinian-taxi-firebomb_n_1798768.html).

Instead most Israelis choose to  ignore the cost of the occupation on the daily lives of Palestinians; and have yet to address Israel’s illegal settlers’ violent activities in the West Bank and East Jerusalem- which they term as a “price tag” cost of Israel’s illegal settlement policies. Fewer Israelis question the traumatic and economic effect of the Gaza siege; consider the impact of isolating more than a million people most of whom are children; or assess the cost of operation Cast Lead that left thousands of Palestinian children orphaned, disabled, and homeless without proper shelter.

But this willful avoidance has its price. A recent poll of young Israeli children found half of those polled are opposed to granting equal rights to Palestinians; and the majority of them fully support their government’s policy of evicting African families including children (http://www.haaretz.com/print-edition/news/poll-half-of-israeli-high-schoolers-oppose-equal-rights-for-arabs-1.2645640). Most disturbing is the recent unprovoked lynch violent mob attack carried out by young Israelis on Palestinian teenagers (http://www.nytimes.com/2012/08/21/world/middleeast/7-israelis-held-in-attack-on-palestinians-in-jerusalem.html?pagewanted=all). The attack took place in sight of a large group of Israelis and none interfered (http://www.haaretz.com/news/national/israel-police-hundreds-watched-attempt-to-lynch-palestinians-in-jerusalem-did-not-interfere.premium-1.459293). And no need to list the well-documented and highly disturbing images of young IDF soldiers boasting of their abusive degrading and dehumanizing treatment of Palestinian children, women and detainees-that also bare and reveal Israel’s deep tragic moral scars.

While these human rights abuses and violent terror acts are callous and disheartening; they offer an opportunity for both Israelis and Palestinians to seriously evaluate the impact of Israel’s occupation on both societies. It offers both peoples an opening to evaluate their past and assess their future prospects. Or simply ask is this where we want to lead our children and society- where violence is an accepted part of the daily lives of young Palestinians and Israelis (http://www.haaretz.com/news/national/israeli-and-palestinian-children-becoming-more-violent-study-finds.premium-1.459818).

These conversations are already taking place among Palestinians and Israeli peace advocates- whether supporters of the two state solution or advocates of one state- most wonder if Israel’s leaders and society can muster the will to address the moral break down of their young. This is a serious moral issue for both Palestinians and Israelis. Israel’s refusal to address the implications and cost of the occupation on its young as well as the youth it occupies is a shared problem (http://www.haaretz.com/news/national/israeli-and-palestinian-children-becoming-more-violent-study-finds.premium-1.459818). So while the Palestinians are the occupation’s main target and its exclusionary purpose; its force of ill is polluting both societies.

Palestinians understand that victims often victimize and they worry about the impact of the occupation on their society. While still under the Israeli occupation they are also concerned about the prospect of their future with Israelis- as two peoples and neighbors.

Many Palestinians are asking what measures are needed to counter the impact of Israel’s racist practices from seeping and infecting their own society? What strategies Palestinians need to put in place to curb their young from internalizing the racism they daily experience at the hands of Israelis?  How can they stop the practice of violence experienced on the hands of the IDF from becoming the operating model for dealing with day- to- day challenges? How can they help fortify their own people, leaders, and organizations from adopting Israel’s attitudes and practices?

Looking ahead they are also asking questions that relate to their future with Israelis- to forge the inevitable peaceful path how are they to interact with Israelis who distrust them? Will Israelis be open to change? What role can Palestinians play to help Israelis come to terms with the impact of the occupation on their respective societies? Can Palestinians take an active role in educating Israelis on the impact of their government’s policies that are infecting both societies? What is the cost of leaving Israelis to deal with their moral crisis on their own? What kind of society will they neighbor?

Palestinian concerns and discussions are concrete and based on their own personal knowledge, experience, history and interaction with Israel’s occupation policies. For decades Israel effectively institutionalized whole- sale racism. While Israel’s occupation policies are  meant to dominate and control Palestinians by purposely discriminating and separating Palestinians from Palestinians and Israelis through a set of legal practices and military laws. Laws that define and categorize the limits of every non Jewish individual Israel interacts with (Christians, Muslims, Druzes, Circassians, Armenians, as well as others).

For Israel’s Jewish citizens institutionalized racism is manifested in its subtle message implying they are of greater relevance. These policies provide Israel’s citizens access, powers and privilege. Its implications are manifested in the belief systems endowed to the individual occupiers who carry, operate and sanction their special status. These privileges include access to political and legal rights, protections and a host of social services within and beyond the Occupied Territories. Where even new Israeli immigrants can not escape its seductive powers- upon arrival they assume themselves superior to the indigenous Palestinians they crowd out of their rightful lands. Acquiescing to repeating the cycle of oppression by some of those who assert to have fled racism.

The occupation impacts the life of those it wants to dominate; and it also impacts the lives of its own citizens. Most disconcerting is the manner by which it influences its young IDF soldiers. While still young and impressionable they are molded to accept Israel’s policies as the face and enforcer of its discriminatory policies. Individual Israelis exposed to it are forced to acquire racist tendencies as members of a privileged class that is primarily structured to exclude and deprive Palestinians.

So while Israel’s racist violent policies are meant to maintain its stronghold of the West Bank, East Jerusalem and Gaza the destructive implications of these policies are harmful to Israelis too. Simply stated the Israeli occupation is injurious to every identifiable group that resides within its reach- its policies are destructive to the collective human dignity of all who intersects its path (http://www.thejewishweek.com/editorial-opinion/opinion/israel-should-not-deport-south-sudanese-christians).

So what does that mean for Palestinians? Israeli individuals’ sanity, well-being and overall morality and belief systems are of great importance to every Palestinian- their future depends on it. While today Israelis are the occupiers of  Palestine, Palestinians soon will neighbor, befriend, and partner with Israelis to build and create their collective future and path to peace. Palestinians understand that Both-people’s past; present and future are intertwined and interdependent. For this reason Israel’s moral crisis is alarming to the Palestinians it occupies.