Israel: A Nation with War in its DNA? 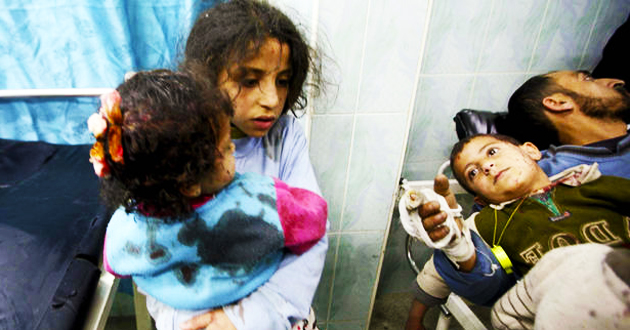 The view from Gaza

It’s no accident that as soon as Bibi Netanyahu returned from Washington DC, where he apparently was rebuffed yet again in his attempts to wage war on Iran, Israel decided to wage war on Gaza instead. Gaza serves as a punching bag for Israeli leaders when they need some two-bit country to “beat the crap out of” (to use Michael Ledeen’s memorable phrase).

Despite a successful Gaza ceasefire, Israel assassinated several Islamic Jihad and Popular Resistance Committee leaders to violate it. This, in turn begat the latest round of Palestinian rocket fire against Israel. Now 25 Gazans have been killed, many civilians, including a 14 year-old boy walking to school with four friends and a 65 year-old man and his daughter tending their farm. The Israel Defense Force (IDF) lied once again claiming they were used as “human shields” by militants:

The Israeli military said it had aimed at a squad preparing to launch rockets from within a residential area of northern Gaza. It blamed the Palestinian groups for operating from urban areas and using civilians as “human shields.”

In fact, there is no evidence in this or any other case of militants using anyone as a human shield. In fact, the IDF has done this numerous times which are documented on video (and reported here). It does this despite the fact that the practice was supposedly banned by the Supreme Court. 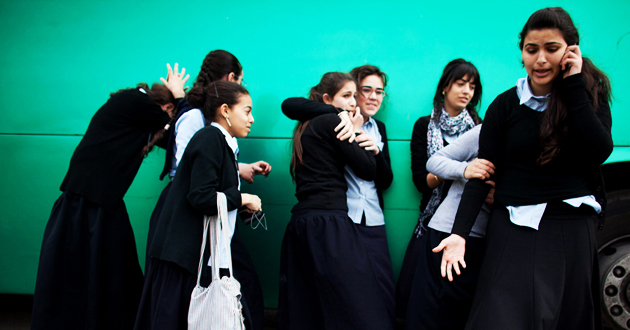 The view from Israel

The NY Times dutifully published the assertion without challenging its accuracy. Also, note that the overall death toll is not reported in the article till two-thirds of way toward the end of the article (burying the lede?). The photo accompanying the article shows Israeli schoolgirls cowering in fear. No Israelis have been killed or wounded. 25 Palestinians killed. Where’s the proportionality?

Bibi said in today’s Haaretz that he’s prepared to escalate this latest round of mayhem. In fact, I’d imagine he’s eager to do so. If he’s made a deal with Obama that in return for Israel not attacking now the U.S. might or will join in an attack later, Bibi will feel he has to inoculate himself among his far-right voters for whom Arab blood is like red meat. If you can’t give ‘em Iranian blood, Gazan blood is a good substitute.

All this denotes a clear choice among Israeli leaders for a state of permanent war against their neighbors. When Ehud Olmert faced the possibility of negotiating a peace deal with a willing Syria, he chose war instead (Operation Castlead). When Egyptian Islamists attacked Eilat last summer, Bibi falsely accused the Gaza-based PRC of orchestrating the attacks, assassinated their five top leaders, and murdered 30 Gazans in a massive air attack. When Bibi couldn’t have the (Iran) war he wanted when he wanted it, he chose to assault Gaza instead. This is a piece of red meat he throws to his far-right constituents in order to divert them from pointing to his failure to advance his plans against Iran.

Israel has become one of the first nations in many decades to survive using a strategy of permanent war footing. One of the first such states was Sparta, followed by Napoleon’s France, after which Nazi Germany followed suit (1938-1945) in the modern era. Israel’s supporters and Israelis themselves should ask whether their Zionist vision embraces Israel as a latter-day Sparta. How long can such footing be sustained? Do Israelis wish their children and their enemies’ children to be cannon fodder for this permanent war machine?

The U.S. media takes its share of lumps in according Israel far too much leeway. It portrays its actions as purely defensive in nature and Palestinian actions as purely offensive. The NY Times, for example, embraced the Israeli narrative here that the so-called success of the Iron Dome anti missile defense allowed Israeli leaders the luxury of not launching an invasion of Gaza.

Isabel Kershner conveniently downplayed the fact that Iron Dome only intercepted 50 of the 150 rockets launched against Israel (“the missile batteries have managed to intercept 54 of the nearly 70 Palestinian rockets”). She also implied that past Gaza rocket barrages have caused massive casualties and damage inside Israel (“the prevention of mass casualties and damage has reduced pressure on the country’s leaders”), which is also false. No Gaza rocket has ever caused “mass casualties” (though several Israeli civilians have been killed or wounded in discrete attacks over ten years) and only a handful have caused any material damage.

Finally, she reports without comment Israeli leaders claiming they plan to forcefully topple the Hamas regime in Gaza (Yuval Steinitz charmingly call it “root canal”) without noting the abject failure of the last attempt to do so during Cast Lead. No one questions the utility of regime change as a strategy in the Israel-Palestinian context.

If we properly excoriate Judy Miller for her over credulous reporting on Iraqi WMD, why should we allow NYT reporters to do the same regarding Israeli claims? The incomplete portrait that Ethan Bronner and Kershner offer of this conflict do a great disservice to their readers, preventing them from being able to understand the overall situation.

5 Responses to Israel: A Nation with War in its DNA?