Gaza Two Years Later: How I Loved My Roof 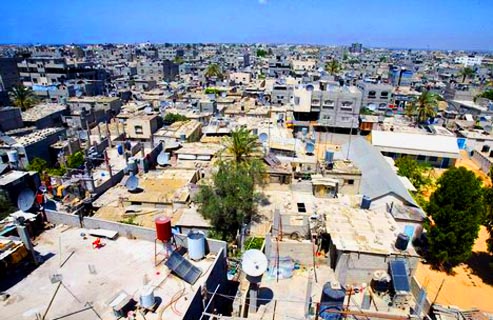 I used to love the roof of my house. Well, not anymore.

There is a bunch of kids in the middle, all gazing at some round glittering objects. Appointing himself as the referee of the game, my little cousin declares the beginning of the match. A young boy starts. His pupils start to get bigger and sharper as he measures the angle. His looks are focused on his target. He professionally flicks the little marble out of his fist with the tip of his tiny thumb. “YES,” he shouts. And the scuffle commences. His competitor, making an oath of divorce, claims that he who won had cheated. Then trying to accept the fact that he lost, he swears it was noting but a fluke by an amateur. Enraged, he quits the game and promises he would be taking revenge the next time they assemble to play.

The kids of the neighborhood always wondered why this group preferred the roof over the street. “The roof is much nicer,” my cousin used to simply reply.

That’s one reason why I loved the roof. I loved the spirit, and I loved the marbles. A year has passed. The kids don’t come over much often these days. The place no longer sounds like their warmhearted spot, let’s say. Had he survived the war, my cousin would have been 12 years old by now. And here I am, selfishly mourning over my stupid roof while others had lost their lives!

There in the corner stands a pigeons’ chamber. My parents have always argued whether to keep it or not. My mother used to complain about the “bad smell” and the “filth” the chamber caused. She, however, was fair enough to always praise the beauty of the doves. At that day, we all cried, mom included. There was too much blood to bear. We came to conclude that not only humans’ but also birds’ blood can be aching to see or to smell. Though the place is pretty dark in here, but now I can clearly see some feathers blowing here and there each time the puff hits what remained of the chamber. I only wish I could touch the feathers.

I don’t know how they get water to reach houses in other countries, but in Gaza, you have a tank on the roof supplying your house with water. Our tank has been leaking for ages. The plumber is always busy (don’t get surprised, for in Gaza, everyone is busy all the time), so we had to live with the water leaking from the barrel. Well, that had its advantages no doubt. The withered lawn under the tank began to get green when the leak first started. No wonder why my brother was sluggish and didn’t want the plumber to come take a look; he must have loved the green lawn. BANG..BANG.. the tank is not leaking anymore. It’s not even there. The lawn slowly dies. I desperately need to go irrigate it.

I used to study on the roof when I was a school-student. I can see my handwriting all over the place: on the water tanks, on the chamber’s wall, on the railing of the roof. One year passed, and the handwriting started to fade. The things on which I used to write are no longer there. I eagerly want to go scribble something. I wish I could do so.

I can’t but love the roof of my house. I didn’t survive the war, but I believe in miracles. I am praying those who survived would witness one.

Written by Sarah Ali, 19, a second-year student of English literature at the Islamic University, Gaza. Gaza Two Years Later is a series of posts by Gazan bloggers and writers reflecting on the two-year anniversary of the Israeli attack on Gaza in the winter of 2008/09. You can read the entire series here.