For Peace, Israel Must Recognize the Nakba 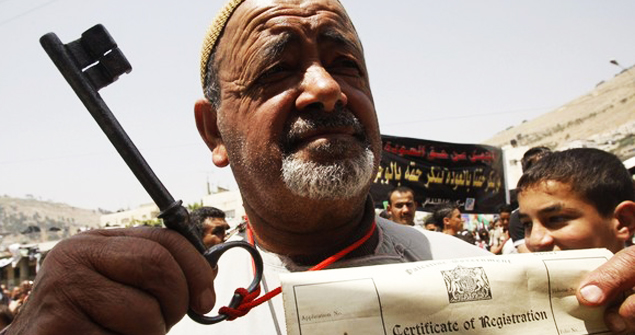 The context of the Nakba (the “day of the catastrophe” when the state of Israel was formed and Palestinians began to be expelled) is central to the Palestinian Israeli conflict.

Any future solution that denies the Palestinian Nakba, that fails to recognize its tragic consequences on generations of Palestinians, will not fully realize the peace as envisioned by advocates of a two state solution – whether Israeli, American, or Palestinian.

The present two state solution proposed to end the Palestinian Israeli conflict will necessarily sacrifice Palestinian Nakba survivors for peace. It will be a formal, binding acceptance of their loss without acknowledgment or recompense.

Israel’s unwillingness to fully recognize its well documented 1948 ethnic cleansing of Palestinians means the scars it has marked on every Palestinian refugee and Nakba survivor cannot be erased. They will endure even should the two-state solution be accepted.

The Palestinians of 1948 were the elites of  Yaffa, Haifa, Akca , the Carmel and West Jerusalem. They were the intellectuals and professionals of Palestine whose life changed overnight with the creation of Israel.

In 1948  more than 725,000 Palestinians fled their homes fearful for their life and the well being of their immediate and extended family.

They left behind their homes, personal belongings, orchards, established businesses and properties, many keeping the deeds to their homes and  keys clenched tightly in their hands with the hope one day they could return. Instead, they became stateless refugees without rights, privileges or protection waiting for a UN handout. They remain scattered in several Arab countries living in corrugated crowded homes reminded daily of their loss at the hand of Israel and Israelis.

Israeli historians Benni Morris and Ilan Pape among others, detail the 1948 Zionists campaign of expulsion, terror and intimidation of Palestinians. According to Pape the Palestinian Nakba was organized by Zionists with one  specific aim: To dispossess the Palestinians from their homes and lands and repopulate it by Jews.

Palestinian fled under mortar shelling with Jewish defense forces stationed at every corner to ensure each fleeing family was given a threatening leaflet promising harm to come should they choose to stay in their neighborhoods and towns. Jewish defense forces drove through Palestinian towns and streets in vans armed with guns and loudspeakers ordering Palestinians to evacuate immediately.

Yitzhak Rabin writes in his memoir Soldier of Peace that when the Zionists were faced with a reluctant Palestinian family unwilling to leave they were ordered to “drive them out” by none other than Ben Gurion.

Palestinians unwilling to leave were killed or  forcibly evicted and their homes were quickly destroyed in open sight for other Palestinians to see.

Meanwhile Zionists made sure atrocities they strategically and meticulously administered on innocent Palestinian children, women and the elderly were well publicized. To  quickly evacuate Palestinians out of their towns and homes Zionists intentionally circulated  Haganah’s massacres and accounts of random rape.

Financial losses suffered by Palestinian Nakba survivors is well documented and substantial, but immaterial compared to the psychological, emotional and physical trauma inflicted on Palestinians past and present.

Many refugees died in far away countries dreaming of being buried in their family cemeteries. Living Nakba survivors when on rare occasions are permitted by the Israelis to visit their Haifa, Yaffa or Aka like stoic pilgrims go to see their homes and read their family names in the brick and mortar of their ancestral home.

Numbered among them is my uncle who stood tracing his fathers’ name still marking the house, silently weeping over happy childhood memories, and the loss and suffering he and his family endured for decades in refugee camps.

He quietly listened to the chatter of an Israeli family occupying his home and walked away when he was mistaken as a tourist. He did not share his purpose, identity or  anguish with them. He simply left, wondering if they ever attempted to look up the name of the family etched in Arabic on the front wall.

Have they once considered the pain inflicted on the original Palestinian owners they dispossessed?  Or will they ever offer his family a simple apology, never mind paying a penny in exchange for the home they enjoy, and the Turkish bath his grandfather built.

Israelis and Jews worldwide understand the necessity of correcting wrongs of the past. For more than 60 years Jews have continued to press for rectification for Holocaust victims whose suffering remains at the core to the Jewish sense of being. No Palestinians were not subjected to the same level of cruelty of the Holocaust – but right is not and should not be a relative value. Palestinians have suffered an horrendous loss that no people should go through;  disconnection from their community; families; ancestral homes; suffered a ruthless eviction at the hands of the Israelis. It should, no it needs to be recognized.

The Nakba survivors are the living tragedy of the state of Israel and are a scar etched onto millions of Palestinian refugees to this day.

They were made homeless to home the Jews.

Since 1948 it is they who have paid a daily price for the creation of Israel.

Its denial is a tragedy to Palestinians, and a shame on Israelis, Israel,  and its supporters. For 64 years Palestinians have been dispersed in refugee camps, stateless and faceless at the mercy of their host countries, while their properties are enjoyed by Israeli families, who indulge and savor Palestinian built homes and the fruit of their labor and their trees.

To amend the past wrongs Israel and all those who supported its creation must recognize the immense and continued suffering the Nakba has inflicted  for decades on Palestinians. The first step to peaceful coexistence should be demonstrated through Israel’s willingness to recognize their deliberate strategy of ethnically cleansing Palestinians. Mending the painful past must begin with an honest discourse and sincere recognition of Israel’s deliberate policies of expulsion.

Nakba survivors fully understand they will be the casualties of a two state solution. Considering their continued painful circumstances and loss, most refuse to accept a two state solution – a prerogative they have the right to exercise. But If Israel sincerely acknowledges the tragic consequences of its 1948 policy it will go a long way to ease the deep pain Nakba survivors have endured.

An honest Israeli attempt to heal the past will also facilitate the adoption of the two state solution by many more Palestinians who desire genuine peace .

One Response to For Peace, Israel Must Recognize the Nakba