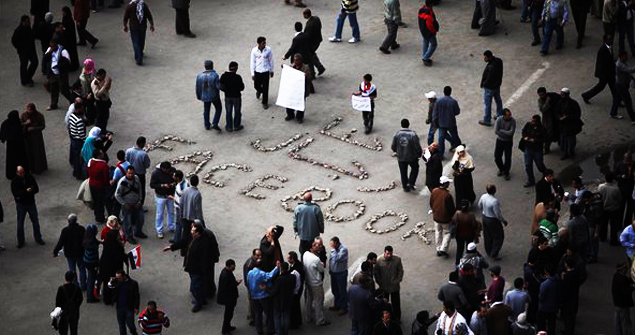 The Facebook IPO may or may not be a good business investment, but the Facebook phenomenon hasn’t faded in one area of the world– the Middle East. The social networking site, along with Twitter, was deployed by the young revolutionaries in Tunisia, Egypt, Libya, Yemen, Bahrain and Syria as an aid to toppling the sclerotic old kleptocracies that were ruining their lives, and they are so far 4 for 2.

While General Motors recently pulled its advertising from Facebook, expressing skepticism that it was selling many cars, Middle East advertisers are still flocking to the site. They caution, however, that you can’t just pile up robot-induced ‘likes’– you have to set up an interactive site (probably with an employee to run it). Arab advertisers are interested in the site’s vast expansion, and it has implications even for gaming. (“Game over” and similar phrases played a role in the 2011 revolutions).

The site continues to grow in popularity in the region. Facebook users jumped from 19 million at the end of 2010 to 43 million today. Arabic is the fastest growing language at Facebook.

Egypt is the single largest source of subscribers, with nearly 11 million. That is about 13% of the population, and about 63 percent of the online population. Egypt is number 20 in the world for Facebook usage.

For women in a conservative society where public space is defined as male, Facebook, Twitter and YouTube offer significant avenues for public speaking and leadership. Likewise, because the old men of the military council and the political parties are not adept at the internet, it is an arena of youth leadership and culture. People also use it a lot for cultural purposes, as with advertising music concerts or public talks of wide interest. The Egyptian newspapers, bewilderingly, lack any announcements of events of that sort (I don’t even see many movie ads in them).

The next few countries by absolute numbers in the region are Saudi Arabia, Morocco, Algeria, the United Arab Emirates and Tunisia. But note that the UAE is tiny in population, so that the proportion of the population using Facebook must be enormous.

The users, as one might expect, are mostly teenagers and twenty-somethings, and about 65% are male, while 35% are female.

There is no correlation between Facebook penetration and revolutionary politics. Algeria has seen only small demonstrations, and the National Liberation Front (FLN), the old line party that made the 1962 revolution, won last week’s parliamentary elections. Morocco saw some demonstrations in the thousands, and the king announced some small reforms (he will now appoint the prime minister from the ranks of the largest party in parliament), but there hasn’t been a big change.

I don’t know of any trouble in the UAE at all. In Saudi Arabia there were some demonstrations last year, and there have been rallies in the Shiite Eastern Province, but the Kingdom increased social welfare benefits and pumped more oil, and seems to have bribed the population to stay quiet. In the face of the twin threats to the Gulf oil monarchies of the Arab Spring and of Iranian power, the Saudis have launched an initiative to turn the Gulf Cooperation Council (Kuwait, Bahrain, Qatar, the UAE and Saudi Arabia) into a European Union-type entity. The policy especially emphasized a Saudi-Bahrain union to contain the restive Bahrain Shiite majority. But the initiative appears to have faltered on GCC fears of Saudi hegemony. In any case, Facebook hasn’t been used except in Bahrain (which has relatively low penetration) for revolutionary purposes in the Gulf.

Facebook is a tool of communications. It can be used for lots of purposes. Where the young people wanted to use it to make a revolution, as in Tunisia and Egypt, it helped them. But it doesn’t cause anything to happen in and of itself. Political will is still primary.

In Egypt, it is ominous that a committee is looking in to UAE-style filtering of the internet, allegedly to block pornographic sites. But filters, once set, and can be used politically. The committee noticed with dismay, however, that when the Mubarak government pulled the plug on the internet in Egypt, Twitter usage surged by 30,000 in that country, suggesting that people had workarounds (probably mainly satellite-based services).

I find it interesting that Facebook does not seem to be important in the Egyptian presidential race. I can’t see that any of the candidates have active sites with large numbers of likes. It is mostly campaign posters and one televised debate, and newspaper and t.v. reporting on speeches. You wonder if the young people maybe are not that interested, since most of the plausible candidates are rather ancient.

3 Responses to Facebook Value Endures Beyond IPO in Middle East