Egypt’s Intelligentisia Needs to Think as its Army Roadblocks Democracy 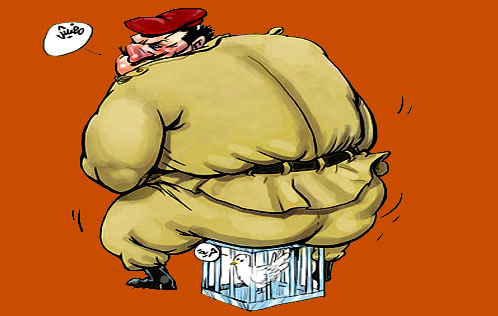 The Egyptian people are fighting battles on all fronts, armed with nothing but hope that the handful of other Egyptians they’re betting on won’t fail them.

No sooner had the battle at the polls completed round one and the results of the first phase of the staggered parliamentary elections were announced, the Supreme Council of the Armed Forces (SCAF) opened a new front with statements made to a group of eight foreign journalists, which beyond a doubt, prove SCAF’s lack of commitment to the democratic process.

According to a New York Times report, General Mukhtar Al-Molla justified renewed attempts for the military council to extend its hold on power through the appointment of a civilian “advisory council” by saying that “in such unstable conditions, the Parliament is not representing all Egyptians.”

The same NYT piece added that Al-Molla said that the “military council did not plan to intervene directly in the constitutional process or name specific individuals to the drafting committee” but that the advisory council which consists of party representatives, artists and intellectuals, “would make suggestions to the military council while also representing it to Parliament” and “help set the ground rules for the constitutional assembly and pick its members.”

The statements triggered and immediate showdown with Egypt’s most organized political party, the Muslim Brotherhood’s Freedom and Justice Party (FJP), which announced that it had withdrawn its representation from the civilian council to object to the lack of legitimacy of such a council.

While the FJP, which raked in a staggering 36.6 percent of the party list votes as well as 36 single-winner seats in the first round, may have objected because SCAF’s council undermines its own power as the potential majority force in the PA, one must also question SCAF’s motivations.

SCAF has taken three parallel tracks over the past months, but at the same time created the conditions that would ensure a clash of legitimacy between them.

First, the army council insisted on holding parliamentary elections before selecting a constituent assembly to draft the constitution first, claiming (perhaps correctly) that this is the only way to ensure that the assembly is a legitimate elected body that represents the people, at the same time implying through the March constitutional declaration that members of the assembly will also be chosen from outside parliament.

Second, following pressure from the street and deadly clashes between protesters and security, SCAF agreed to dissolve Cabinet and appoint a so-called “national salvation government” with the full powers of the president barring issues related to the military and the judiciary. It also promised to hand over to a civilian authority by the end of June 2012, only three months after both houses of parliament convene.

Finally, SCAF came up with this mysterious 30-strong, unelected advisory council which, as indicated by the words of General Al-Molla, is likely to have a double mandate of overseeing the supposedly fully-empowered Cabinet, and taking on parliament’s core task of selecting the constituent assembly and drawing up its internal working mechanism.

The confused and deliberately convoluted scene begs the questions: Why then did SCAF wait ten months to hold elections if a constituent assembly will not be selected by elected officials but by an appointed advisory council? What powers will the new parliament have if, as SCAF statements have indicated, it can neither appoint a Cabinet nor withdraw confidence from the existing one? Why then did SCAF give full powers to a new Cabinet, which we are told will only last until June, if that Cabinet may be required to answer to an advisory council, which, according to the latest reports, will also include members of the military council?

This classic case of too many cooks in the kitchen is not an innocent attempt by SCAF to ensure that the constituent assembly is fully representative, nor to allay international fears regarding the rise of Islamists, especially the ultra-conservative Salafis as initial elections results have shown. There was never any doubt that the FJP were going to sweep the polls. Even under Mubarak in 2005 when they had to field candidates as independents, they won 88 seats, almost one fifth of the PA.

What SCAF is doing is continuing its strategy of divide and conquer, pitting the various political forces against each other and fuelling a conflict over legitimacy under the guise of protecting the “civil” nature of the state against Islamists to eke out as many gains as possible through this false façade.

While their actions may appear to balance the political scene in favor of more liberal forces that have so far failed miserably at the polls, the truth is, such moves are no more than self-serving maneuvers to guarantee some form of legal framework for SCAF’s political meddling and immunity from public oversight, all at the expense of achieving a full-fledged democracy. They’re using a back door to push through controversial supra-constitutional principles that were summarily rejected by Islamists and liberals alike.

Members of SCAF’s advisory council should think twice before accepting (at best) a vague role that can only serve to inflame an already tense political climate, or (at worst) to become the civilized face of a power-hungry army council that has them on puppet strings.

Egypt’s respected intelligentsia should stop doing the same thing over and over again but expecting different results. That’s the definition of insanity.