Egypt: How to Amputate a Revolution 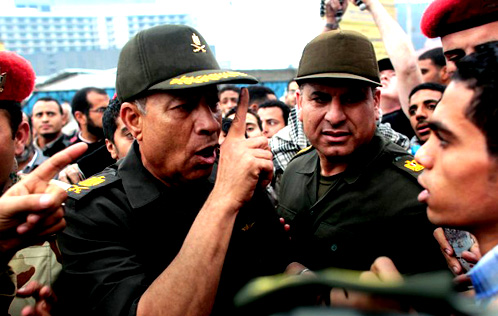 Why else would SCAF spearhead the unethical smear campaign against the now iconic activists who marched at the forefront of the January 25 uprising?

Why else would SCAF refuse to issue a political exclusion law that would ensure that the remnants of the ousted regime are denied the right to political participation for at least five years?

Why else would SCAF continue to offer preferential treatment to an ousted president facing charges of ordering the killing of peaceful protesters and corruption by harboring him in a luxury hospital and paying him the “modest” pension of LE 93,000 a month?

Why else would SCAF take over the criminal investigation of the bloody Maspero events in which 31 civilians are detained facing charges, awaiting military trials and 11 others stand accused but are not yet in prison, while not a single army soldier or a state TV official who incited the violence has even been questioned in relation to the worst military crackdown on peaceful protesters since the regime was toppled on Feb. 11, where 27 civilians were either shot or crushed to death by army APCs?

These civilians are not a statistic, they were real people, with names, histories and families burning with indignation over their shocking and brutal loss, when the “state” and the so-called “protectors of the revolution” failed to show the least respect by declaring even one day of national mourning in their memory.

But sadly their memory will forever be tarnished by an irredeemable sense of betrayal. October 9 should not have been a reenactment of January 28, or so we all thought.

Why else would SCAF turn a blind eye to the increased incidents of alleged police torture, most recently the case of Essam Atta, whose mysterious death in late October has not been investigated and whose autopsy report has still not been issued, while at the same time passing summary judgment on thousands of civilians through illegal military court procedures on the pretext of imposing law and order? Ironically Mubarak-era Egypt only saw a fraction of such military trials and the country today is more lawless than it has ever been despite the supposed deterrent effect of military trials and the rampant abuse of emergency law.

Why else would SCAF rekindle the debate over supra-constitutional principles which most political players have deemed a run-around the will of the people?

SCAF even added two articles to the original charter appointing itself the “guardian of constitutional legitimacy” (ironically a legitimacy that was bestowed on it by the people) and shielding the defense budget from public scrutiny.

Unleashing this controversy just weeks before legislative elections is a deliberate attempt to further polarize and fragment the political sphere between Islamists and non-Islamists in a contrived debate that is ultimately about the choice between transitioning towards a true democracy or regressing into a pseudo-military dictatorship pretending to be a democracy.

Despite actions that consistently betray the military leadership’s unwillingness to yield power to a civilian authority, SCAF still has a golden opportunity to prove all its detractors wrong. It’s a basic formula: end all military trials for civilians; stop exercising selective justice; withdraw from investigating Maspero and hand the case over to the public prosecution to prove your commitment to the rule of law and to show the people that justice will be served no matter who is implicated; and remove all references to a custodian role for SCAF from any proposed non-binding constitutional principles charter.

Today it is paramount for SCAF to get off its high horse, relinquish its narrow self-interest and prove the good intentions to which it has only paid lip service so far.

The steps are simple, but sweeping and irrevocable.