Egypt: Can Morsi Now Rebuild Bridges to the UAE? 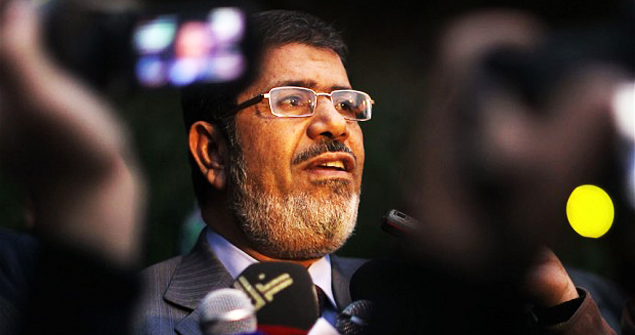 Egypt’s new Muslim Brotherhood President Mohammad Mursi has a lot of electoral promises to live up to. There’s an ailing economy to deal with, dwindling foreign reserves, growing unemployment, a drying-up of the tourist industry and a stagnation of foreign investments — each of which must be tackled first and tackled now.

Mursi has proven to be a patient person. He braved ridicule, having been labelled a “spare tyre” and has been persistent, having pledged to rebuild ties with the liberal and leftist revolutionaries his group had abandoned. The question now is will the Muslim Brotherhood be able to rebuild Egypt’s ties with those Gulf states that are most sceptical of its rise — Saudi Arabia and the UAE?

I have explored the Muslim Brotherhood’s relationship with Saudi Arabia repeatedly in previous articles. The decades of suspicion that the Saudi authorities have held the Muslim Brotherhood in may be coming to an end due to two significant developments. First, the arrest of an Egyptian lawyer in Saudi Arabia led to a historic, high-level visit by an Egyptian delegation last month to Riyadh, headed by Muslim Brotherhood leaders, including Sa’ad Al Katatni, when he was speaker of the parliament prior to its dissolution and in which he met a coterie of Saudi officials, including King Abdullah Bin Abdul Aziz. Second, the passing away of crown prince Nayef Bin Abdul Aziz may allow a new page to be opened between the two sides. Nayef was, after all, the most vocal Saudi government critic of the Muslim Brotherhood.

Although divine intervention has triggered a potential cold rapprochement between the Muslim Brotherhood and Saudi Arabia, there seems to be no heavenly involvement when it comes to the UAE. In this case it seems, disagreements will have to be dealt with the old fashioned way and here the ball is in the court of the Brotherhood.

There are two major concerns the UAE may have with regard to the Brotherhood. First, its relations with Iran and second, and more importantly, its relations with what is believed to be a Muslim Brotherhood offshoot network operating illegally in the UAE, a country that allows no political activities. With regard to Iran, it is unlikely that the Brotherhood will begin a rapprochement with a country that is aiding the brutal regime of Bashar Al Assad, who is facing a rising insurgency that includes significant numbers of Syrian Muslim Brotherhood. Second, the Muslim Brotherhood is a Sunni-based organisation that is exceedingly sceptical of the role that Iran, a Shiite theocracy, is playing in the countries of the Middle East. Therefore the UAE’s concerns with regard to Iran may be assuaged not due to close coordination but to a meeting of interests between it and the Brotherhood.

Like Saudi Arabia, the UAE is among the biggest investors in Egypt, having bankrolled infrastructure projects and entire towns. Following the fall of Hosni Mubarak, the UAE, home to 300,000 Egyptians, has pledged $3 billion (Dh11 billion) in aid and investments to the North African state. Additionally, unlike other states in the region, the UAE does not have a history of meddling in the internal affairs of Egypt whether through media, religious or political avenues.

Many in the UAE believe that despite denials by the Muslim Brotherhood leadership in Egypt, the political Islamists in the emirates have benefited from support and remain in contact with the mother organisation in Egypt. It is also possible that second and third-tier officials within the Brotherhood are behind this contact with their UAE counterparts. A declaration by a senior Muslim Brotherhood member in the UAE that as of 2003, his group no longer pledged allegiance to the General Guide in Cairo, only confirmed people’s doubts of the strength of the relationship.

This issue is the main obstacle today standing between a UAE-Brotherhood rapprochement. The UAE ban on political activity is not directed at the Brotherhood or its affiliates, but is the general policy of the young state. Egypt’s Brotherhood could choose to demonstrate good will by publicly distancing itself from any underground illegal organisations operating in the UAE. The Brotherhood, which now is the de facto leadership of Egypt, must go the extra mile and disclose to the UAE any information that may pose a national security threat, if it is in fact keen on building ties with the country. Now is a historic opportunity to show such good will.

President-elect Mursi has vowed to be a leader to all Egyptians and not simply accountable to the Brotherhood. It is up to him, therefore, to convince the group’s various factions to back off from any activities that would jeopardise his chances of success with potential friends and donors. His patience and persistence may yet again come in handy, both within his own group and also in the country’s relations with the region.

One Response to Egypt: Can Morsi Now Rebuild Bridges to the UAE?