Egypt and the Real Enemy Within 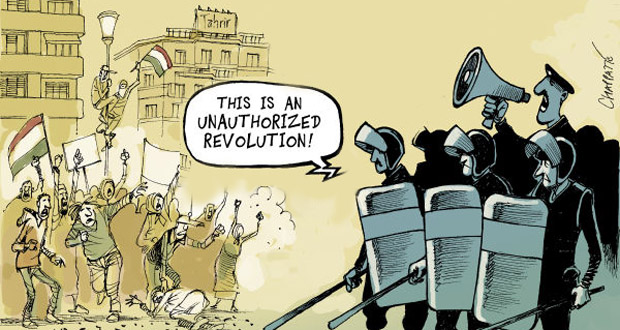 Since hindsight is always 20/20, looking back the answer is in reality more no than yes.

When then-vice president Omar Suleiman made the historic 30-second announcement that Mubarak has “relinquished” his position as president and “assigned” the Supreme Council of the Armed Forces the task of “running the affairs of the state,” the millions, myself included, who were watching and who later filled the streets in celebration, practiced selective listening.

What we heard, in fact, could not have been further from the truth.

As the actions of SCAF in the subsequent days and weeks have proven, Suleiman’s announcement was no more than the well-crafted headline of a last gasp attempt to revive the failed 1952 military coup; it was the outcome of an elaborate deal between Mubarak and his defense minister.

SCAF began implementing their side of the bargain from day one. As people unknowingly wallowed in the intoxication of a false victory, national media, displaying the accumulated effect of decades of state direction, began writing the new narrative for SCAF’s ultimate plot to stifle the core demands of the uprising: bread, freedom and social justice.

As early as Feb. 26, when the first of some 12,000 civilians were subjected to military trials after a violent military police sweep near the Cabinet building, SCAF’s reign of terror began, supported by a virulent propaganda machine that propped up the army as the guardians of stability and the ruling council’s critics as thugs, enemies of the state.

But the real enemy soon emerged.

Throughout, the propaganda machine continues to work full-throttle as SCAF maintains a steady output of on-message Facebook statements just to keep up appearances.

The parallel goal of creating an enemy began way back in July, when SCAF in an official statement accused April 6, the youth group largely credited with spearheading the uprising, of receiving illegal foreign funding. While the probe proved vacuous and unfounded, no statement was ever issued to clear their name.

On the contrary, another, wider-ranging inquiry was initiated into the funding of local and foreign NGOs, which reached a head earlier this week when 44 NGO workers, including 19 Americans and 14 Egyptians working with the International Republican Institute, Freedom House, the National Democratic Institute, the International Center for Journalism as well as two Germans with the Konrad Adenauer Stiftung, five Serbs, a Jordanian and a Palestinian, were mostly banned from travel and referred to the Cairo Criminal Court on a variety of charges ranging from illegal political activity, to working without a license.

The mystery shrouding this campaign can be easily cracked if seen within the context of SCAF’s master plan. The unrelenting street pressure to hand over power to civilian rule with no concessions and without guarantees for a safe exit, has left Egypt’s military rulers with no other option but to play the national sovereignty card. What better distraction from a year plagued with self-serving mismanagement, where thousands of ordinary Egyptians were subjected to incommunicado detentions, trials and sentencing before military courts that provide little or no due process, while shielding Mubarak from real accountability, or at least detaining him in jail, than a grand international conspiracy against Egypt by the US and its homegrown agents, the “traitors” who sold their country to the highest bidder?

It seems that what began as a typical black propaganda tactic has spiraled out of SCAF’s control. While the judiciary is bent on claiming full control and authority over the probe, SCAF is having to deal with the bullet it shot itself in the foot by alienating the international community and jeopardizing its annual $1.3 billion in US military aid.

Prime Minister Kamal El-Ganzoury recently likened Egypt today with the 1967 Naksa defeat against Israel. What he failed to mention was that, then as now, it was also a Supreme Council of the Armed Forces that was responsible.

There is a pattern, and finally Egyptians are beginning to see it.

Although I have endeavored throughout this piece to prove that we have little to celebrate today, I still believe that there is a ray of light at the end of the tunnel.

Despite having all state institutions at its disposal, SCAF has still failed to silence its detractors, whose creative and dedicated grassroots approach to exposing their lies has slowly but surely succeeded in mobilizing support. Each confrontation, every drop of blood spilt in the struggle for democracy and dignity has taken away from SCAF’s legitimacy and turned more Egyptians against military rule that has been entrenched in every official civilian institutional level since 1952.

SCAF’s reaction to recent calls for a general strike and perhaps an escalation to a state of complete civil disobedience is proof that the generals are losing ground. The muscle-flexing mass redeployment of army soldiers and vehicles is a confession on SCAF’s part that they are facing a worthy adversary and fits in well with the fear-mongering strategy they have adopted throughout to tarnish their critics.

They won’t let go easily, but neither will those who are still willing to sacrifice everything to make their dream come true.