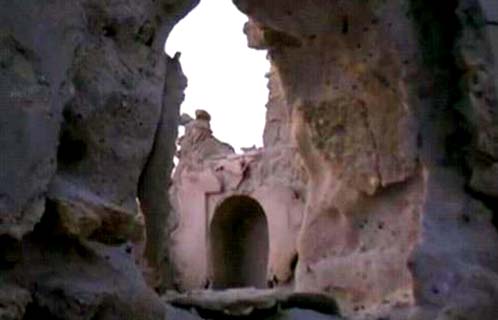 We happened to mention Jazirat Al Hamra on the radio yesterday and it caused quite a conversation. The whole thing was triggered by the unlikely news that there is to be a new Waldorf Astoria Hotel* in Ras Al Khaimah.

It appears that few people these days know about Jazirat Al Hamra, the little deserted village south of Ras Al Khaimah town. It’s the ancestral home of the Zaabi family (or tribe) who left Ras Al Khaimah following an ongoing dispute with the ruler and were given housing in Abu Dhabi by Sheikh Zayed. Living in Abu Dhabi, the family still retained title to their houses, which stand today in the middle of the huge Al Hamra tourism and leisure development, surrounded by big hotels, golf courses and man-made lagoons. It’s a sort of Freej moment, the little single-story houses surrounded by towering development.

Jazirat Al Hamra is a delight to wander around, old style coral and adobe houses with their rooms all leading off a central courtyard, often with a henna tree at its centre. When we first went there, you could still find ledgers with grocery entries and three figure telephone numbers, bric a brac and old electrical fittings in the houses, many of which were already descending slowly and elegantly into ruin. There’s an old mosque there, too, its minaret a dumpy little thing in which the muezzin would stand and sing out above the rooftops – but only just, it’s not very high.

The beach at Jazirat Al Hamra, now cut off from the village, used to be one of the few places where, after the first storm of the year, it was possible to find paper nautilus egg-cases, amazingly delicate little pieces of fractal beauty. The village was always on our list of tourist destinations for visitors, a little piece of the UAE’s history and heritage that hadn’t been tarted up, rebuilt, copied or otherwise ‘updated’.

When I was talking about it on Dubai Eye, one listener, a UAE National chap called Rashid, texted in to say that everyone stayed away from Jazirat Al Hamra because of the djinn. We brought him on the phone line to talk a little more about this aspect of the village’s story and he told of how the locals would tell spine-chilling stories, goading each other into a high state of fear and the young men who would stay overnight in the village as a dare. I know of other locations that enjoy a similar reputation – there’s ‘Swiss Cottage’ in Sharjah, just across from the Al Owais Majlis by Green Park. Apparently no local would ever dream of renting the place as it has a rich reputation for housing powerful djinn. Villas here are lit around their boundaries, again apparently part of the same tradition of warding off djinn.

Across the Arab World people wear and own the blue talisman against the evil eye, nazar bonjouk in Turkish, part of a rich and deeply rooted belief in the supernatural around the region. It did rather strike me that the departing Zaabi would have seeded the rumour in their wake to ensure their village was left alone.

You don’t want to mess with djinn, see.

* Can’t even say ‘Waldorf’ without thinking about this comedy classic… Sorry about the subtitles, it was the only version I could find…