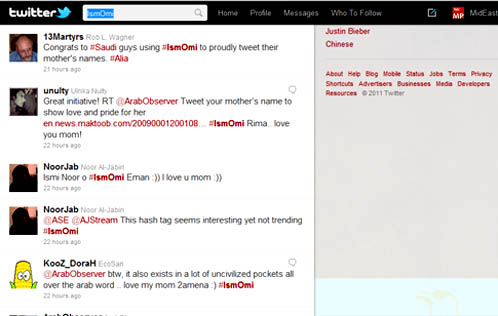 Set to trend – who doesn't love their mum?

A group of Saudi users of Twitter are looking to break a Saudi social custom of not using their mother’s names in public. (The tradition also extends to using one’s wife’s name.) The group points out that by making mothers (and other women) invisible, it strips them of a great degree of power and undermines their ability to be seen as individual human beings with a full suite of human rights.

This is how custom gets changed: People simply refuse to honor a tradition anymore. This, too, is likely how the ‘tradition’ of women not being able to drive will change. Instead of waiting for some higher authority to authorize or bless the activity, women will simply say, ‘Enough’ and start driving. We’re seeing this already, on a small scale. If it were to happen on a large scale, then change would be effected.

JEDDAH: Saudi tweeters have created a hashtag called IsmOmi (Arabic for “my mother’s name”) in an attempt to break a longstanding taboo that prevents Saudi men from mentioning the name of their mothers.

The hashtag enables them to say their mother’s name and allows them to bypass a critical society.

Hashtags are created by adding # to a “tweet” on Twitter. They are terms invented to add to tweets on a given subject and build a community of tweets or build toward a “trending topic.”

Saudi tweeters see this as a way to express their love and gratitude for their mothers. It is also considered a step toward empowering Saudi women. Saudi tweeter Khalid Al-Ahmed believes the hashtag is a healthy way to break down some of the social customs that he sees have unnecessarily burdened Saudi society for decades.
…