Saudi Arabia: “The Female Body is a Battleground in the War to Stem Reform” 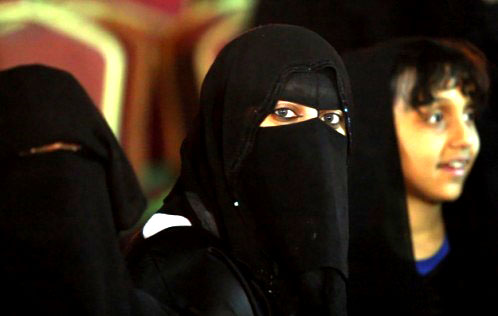 As Saudi women celebrate their progress in gaining voting rights and expanded employment opportunities, conservatives have intensified their campaign to marginalize those achievements in a new round of attacks targeting liberal Saudi writers and thinkers sympathetic to the women’s movement.

Saudi newspaper columnist Saleh Al-Shehi made a vague critical comment on Twitter at the Saudi Intellectual Forum at Riyadh’s Marriott Hotel that men and women were behaving “shamefully” by socializing during breaks. He implied Saudi men are aiding and abetting the corruption of women in the name of progress. One leading woman writer described the tweet as opening “the gates of hell.”

Saudi Arabia’s internal cultural and religious wars over the last decade have focused on women’s rights issues almost to the exclusion of everything else. Voting, running for public office, employment, education and women’s bodies rarely go unmentioned among religious conservatives railing against the perceived corrupting influences of the West. In essence, the female body has become the battleground in an ongoing war to stem reform.

Saudi women activists and Islamic feminists over the past year have aggressively pursued male allies to help advance their cause. And many forum participants offer varying levels of support to better integrate women into society.

Conservatives, however, see the changing role of women a threat to the stability of society, especially considering that gender segregation is ingrained in the daily lives of all Saudis.

Al-Shehi’s Twitter shot heard throughout the kingdom took on a life of its own on Facebook and the online Saudi newspaper Mmlkah (Kingdom), which reported the incident. The coverage gave conservatives ammunition that Saudi Arabia’s liberal writers and intellectuals crossed the line with flagrant immoral behavior.

The Saudi Intellectual Forum was the second conference held in eight years to bring together more than 1,000 writers and thinkers. A key speaker was Princess Adela Bint Abdullah, daughter of King Abdullah and the wife of the kingdom’s education minister, Prince Faisal Bin Abdullah Bin Muhammad Al-Saud. Among the attendees were author Abdo Khal, winner of the 2010 International Prize for Arabic Fiction for his book “She Throws Sparks.” Khal often writes about individuals living on the margins of Saudi society, which led the Saudi government to ban some of his work as un-Islamic. Also participating was Saudi novelist Badriah Al-Bishr. The conference concluded Dec. 29.

Al-Shehi’s tweet in Arabic said, “I have believed that the so-called enlightenment culture project in Saudi Arabia revolves around women.” He added that it was shameful. Al-Shehi tweeted during a break in events while in the Marriott lobby crowded with men and women. Almost immediately, photographs circulated online showing Khal and other male forum participants speaking in close quarters with Saudi women. The tweet, according to some participants, implied that Saudi intellectuals and writers were not promoting cultural awareness, but pursuing an agenda of corruption.

A Facebook user identified as Lamh Al-Khawater from Bahar Al-Makhatr (some thoughts from the sea of danger) posted a link to the Mmlkah article on the popular Facebook page run by Dr. Sabah Abu Zinadah. Zinadah writes on social issues and has more than 5,000 followers. Al-Khawater wrote, “Does being educated mean to strip off our values and our morality and cross the red lines?”

Coverage from Mmlkah featured several photographs of forum participants and screenshots of the tweets. Al-Shehi’s comments earned praise from Sheikh Muhammad Al-Oraifi. “(He) is a good man and I have found him smart, wise and educated and (he) cares about his country and religion,” he wrote.

Khal threatened Al-Shehi with a defamation complaint if he did not apologize, but the harshest remarks came from Saudi writer Lamia Baeshen, an academic specializing in English literature. She invoked an Islamic rebuke that shakes up even the most stalwart Muslim conservative. “Hasbi allahu wa ne’mal wakeel (“Allah alone is sufficient for me and is the best trustee of my affairs.” Muslims generally interpret this as “I delegate Allah as my attorney to give me justice from you”),” she wrote on Facebook.

“You have opened gates of hell,” she added.

By threatening a defamation complaint, or more accurately libel, Khal raised the stakes in the war over cultural values, attitudes about women’s social behavior and the price paid for damaging reputations. While the burden of proof for defamation and libel is set high in Western democratic countries, the threshold is much lower in Saudi Arabia. A Saudi’s honor and personal and religious reputation often are the keys to professional success. A Saudi can face professional and personal ruin if his religious faith and morality are impugned and the allegations go unchallenged.

Yet, as personal attacks via Twitter and Facebook grow and the ironclad protections against libel once found in Saudi print media diminish, establishing personal and professional harm has become more difficult.

Westerners are often baffled over controversies involving men and women socializing in the same room, but Saudi society strictly adheres to gender segregation to avoid improper conduct. Separating men and women goes to the heart of Islam’s definition of morality. Men and women meeting in the lobbies of Jeddah’s upscale hotels are relatively common, but Riyadh hotels follow a stricter code of conduct. However, Riyadh’s Marriott Hotel staff members often overlook such interactions since foreigners often can only conduct business with Saudi businesswomen in a public lobby.

Some Saudi journalists view the Marriott incident as an expanded effort by conservatives to tame influential male intellectuals supporting the suffrage movement. Until last year, women activists have largely fought the battle alone. In 2009, 13 Saudi women journalists complained to the Ministry of Interior that the online newspaper Kul Al-Watan defamed them by alleging that “women journalists rely on illicit relationships with newspaper bosses to get support and fame.” In March 2011, Amal Zahid and Amira Kashgari, prominent writers on women’s issues for Al-Watan, were banned from writing.

One Saudi woman journalist said the mere suggestion of immoral behavior not only could leave a career in tatters, but also create a roadblock and even reverse advances in women’s rights.

“It’s not necessarily religious people who think this way,” she said. “It’s people blinded by backwardness and tribal culture. You look at what happened in the Marriott lobby and say to yourself, ‘How silly, it’s a big deal over nothing.’ But it is a big deal. If the men who support our cause are silenced for fear of being accused of corrupting Saudi women, we will get nowhere.”

One Response to Saudi Arabia: “The Female Body is a Battleground in the War to Stem Reform”