‘The Blood’ and ‘The Bang-Bang’: A Freelancer in Syria 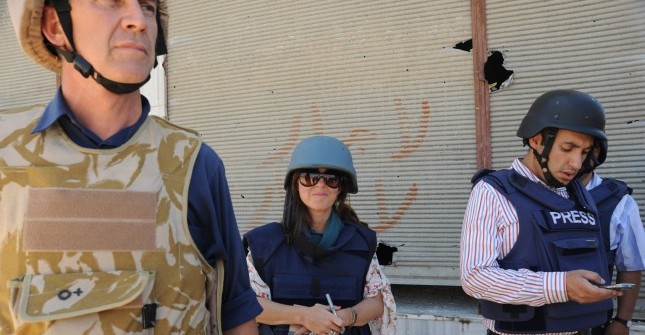 He finally wrote to me. After more than a year of freelancing for him, during which I contracted typhoid fever and was shot in the knee, my editor watched the news, thought I was among the Italian journalists who’d been kidnapped, and sent me an email that said: “Should you get a connection, could you tweet your detention?”

That same day, I returned in the evening to a rebel base where I was staying in the middle of the hell that is Aleppo, and amid the dust and the hunger and the fear, I hoped to find a friend, a kind word, a hug. Instead, I found only another email from Clara, who’s spending her holidays at my home in Italy. She’s already sent me eight “Urgent!” messages. Today she’s looking for my spa badge, so she can enter for free. The rest of the messages in my inbox were like this one: “Brilliant piece today; brilliant like your book on Iraq.” Unfortunately, my book wasn’t on Iraq, but on Kosovo.

People have this romantic image of the freelancer as a journalist who’s exchanged the certainty of a regular salary for the freedom to cover the stories she is most fascinated by. But we aren’t free at all; it’s just the opposite. The truth is that the only job opportunity I have today is staying in Syria, where nobody else wants to stay. And it’s not even Aleppo, to be precise; it’s the frontline. Because the editors back in Italy only ask us for the blood, the bang-bang. I write about the Islamists and their network of social services, the roots of their power—a piece that is definitely more complex to build than a frontline piece. I strive to explain, not just to move, to touch, and I am answered with: “What’s this? Six thousand words and nobody died?”

Actually, I should have realized it that time my editor asked me for a piece on Gaza, because Gaza, as usual, was being bombed. I got this email: “You know Gaza by heart,” he wrote. “Who cares if you are in Aleppo?” Exactly. The truth is, I ended up in Syria because I saw the photographs in Time by Alessio Romenzi, who was smuggled into Homs through the water pipes when nobody was yet aware of the existence of Homs. I saw his shots while I was listening to Radiohead—those eyes, staring at me; the eyes of people being killed by Assad’s army, one by one, and nobody had even heard of a place called Homs. A vice clamped around my conscience, and I had to go to Syria immediately.

But whether you’re writing from Aleppo or Gaza or Rome, the editors see no difference. You are paid the same: $70 per piece. Even in places like Syria, where prices triple because of rampant speculation. So, for example, sleeping in this rebel base, under mortar fire, on a mattress on the ground, with yellow water that gave me typhoid, costs $50 per night; a car costs $250 per day. So you end up maximizing, rather than minimizing, the risks. Not only can you not afford insurance—it’s almost $1,000 a month—but you cannot afford a fixer or a translator. You find yourself alone in the unknown. The editors are well aware that $70 a piece pushes you to save on everything. They know, too, that if you happen to be seriously wounded, there is a temptation to hope not to survive, because you cannot afford to be wounded. But they buy your article anyway, even if they would never buy the Nike soccer ball handmade by a Pakistani child.