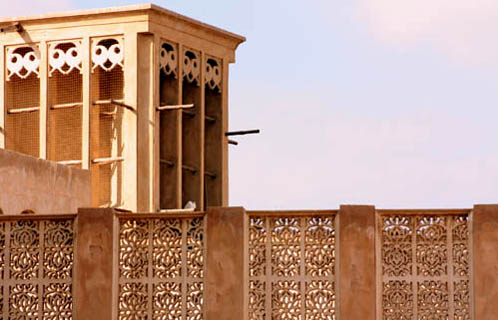 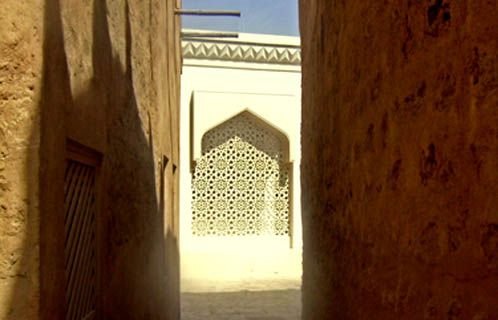 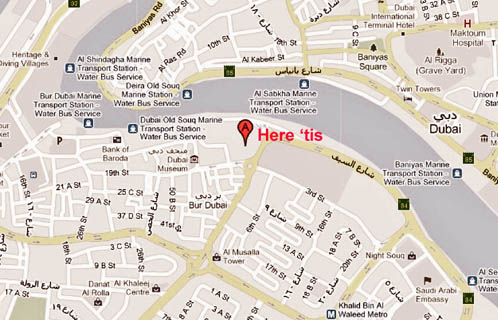 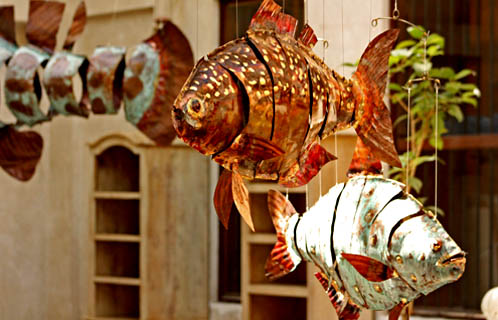 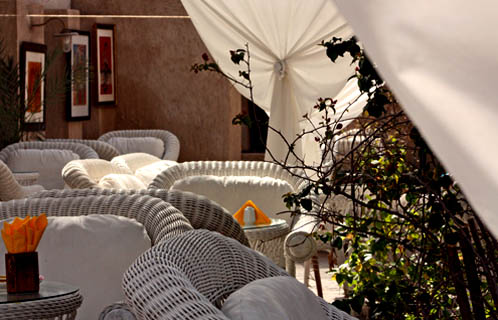 My husband calls this area, Bastakiya, the soul of Dubai. Perhaps it is, but I think not. It’s quiet. Too quiet.

Just a falafel-throw away are the heaving and heavily fumed streets of Bur Dubai, an area of trade. Banks, bazaars, law courts and embassies are interspersed with crumbling apartment blocks and once-fashionable hotels. Possibly Bur Dubai is the soul. At least it is the heart – it sits smack in the middle of the City, between New Dubai and Deira. It beats 24/7, and without it, Dubai could very possibly be a robot.

But the area Hambone calls the soul is Bastakiya. It’s another world inside a heaving metropolis. Dubai’s very own Vatican, I suppose, minus the crowds, cheap wine and Catholics. And if you want to visit this little treasure any time soon, you’d better hurry. The Dubai Summer is not a friend of this rustic outdoor area.

Most of the buildings in Bastakiya date back to around the 1890s (I believe the Dubai Museum – walking distance from Al Bastakiya in cooler months – is the oldest with a birth-date of 1799). Way back then, they had been homes for the wealthy, but after oil was discovered and this wealth reached new heights, they moved onto bigger and more modern homes in newer residential areas. Bastakiya was left for expats, and eventually became an area of warehouses and accommodation for labourers. It was scheduled for demolition in 1989. But, thanks to the intervention of a concerned british expat, a letter to Prince Charles, a visit to the area and a bit of a nudge from all involved, it was given a reprive.

Dubai is old. It has existed as a settlement since 3000BC, prospering in a tiny way off the back of traveling trade and local pearl fishing. But there are no remnants of this time (besides some 6th century ruins fenced off in an indifferent way in the back streets of Jumeirah) – all architecture either eroded swiftly by the harsh desert environment or naturally disintegrated due to it’s temporary nature. This is no Rome, Aleppo, Tunisia, Petra or Sanaa. The only buildings erected to last are those that stand more than 50 stories tall, and I wonder if even they will weather the shamals of the Dubai environment – both physical and economic.

Bastakiya is the closest we get, and few tourists see it, instead opting for malls, world’s largest, world’s tallest, world’s most expensive monuments. Who wants to see the ‘a bit old’, smallish gathering of history and culture? I do.

Shortly after I started my photography course last year, we were asked to imitate the work of one of the artists from www.magnumphotos.com and I chose to attempt to capture the bold geometry of the work of Bruno Barney, because I looked at his work and immediately thought of the Bastakiya area. The architecture is basic, like building blocks, all in shades of ochre and terracotta, and with pathways narrow and uncluttered. But because the buildings are not laid in exact grid forms, the shade in the morning or evening angles its way across the crazy paving, creating a linear hotchpotch of dusty beauty.

Most of the homes are open to tourists, and you may feel like an intruder as you creak open the heavy antique wooden doors, hunching yourself over to get through the stunted opening, asking anyone behind if it’s ok to come in. The answer is always yes, and you will find galleries, cafes, coin museums, shops, calligraphers, spice stalls and cultural centres. You can easily walk around on your own, and cover it in a morning. Start with breakfast at Basta Art cafe. Then meander around the quiet alleys, falling into open spaces filled with (constantly changing) modern art, stopping in the galleries whenever the heat takes you, and fueling with turkish coffee and dates at XVA. Make sure you take the stairs to the rooftops at every opportunity (especially the Bastakiya nights Restaurant). From here, you can see another beautiful aspect of Bastakiya, the windtowers, inner courtyards and stone embellishments on the upper walls.

Possibly it is the soul of Dubai. Quiet, old fashioned, coloured like the desert, beautiful, welcoming and full of culture, but tiny, hidden, unknown by many, occasionally ignored by it’s own people, and overwhelmed by the modern world. It’s a nicer thought than putting the local soul in the middle of the Burj Khalifa.

If you’re not into accidentally barging into people’s houses on your own, you can take a structured tour with the Sheikh Mohammad centre, or even sit with them for breakfast or lunch. Also look out for events such as the Bastakiya Art Fair – the link here includes a map of the area with the open houses listed – useful if you are going it on your own. You can find more of my pictures here, on the sandpit diaries.