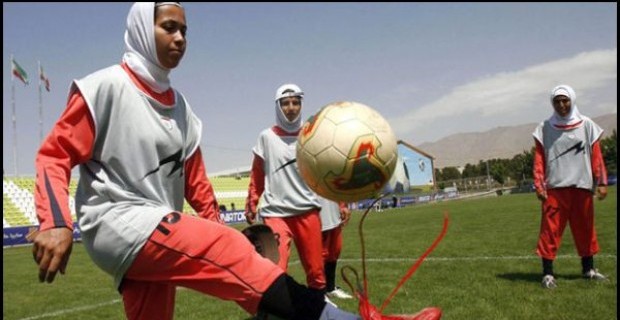 Many female Muslim football players are celebrating a recent decision by the International Federation of Association Football (FIFA), football’s international governing body, to allow them to test a specially designed headscarf. The decision will be reviewed after a four-month test period. FIFA has prohibited headscarves since 2007, but this new decision, which the UN pushed for, will hopefully allow more girls and women around the world to take part in the game.

During a recent qualifying match for the Olympics, FIFA prevented the Iranian women’s football team from playing a match against the Jordanian national team because the players refused to remove their hijabs, or headscarves. The headscarves, which covered the players’ hair, broke FIFA’s strict dress code, which had been officially implemented for safety reasons.

As no hijab-related injuries have ever been reported and headscarves have been permitted in other sports, such as rugby and taekwondo, others saw the ban as discrimination and a baseless reason to exclude these Muslim women. In Iran a former national coach even feared that such a ban would mean “that women’s football in Iran is over”.

Since 2007, the ban on wearing the hijab at FIFA competitions has driven girls and women away from the game all over the Muslim world. Just as earlier, women and girls in Iran and other Muslim societies had to challenge their parents and local traditions just to play football; they now also had to struggle with FIFA, the institution which was supposed to support its players all over the world.

The ban had severe consequences for female players and a campaign to change the rules was initiated by FIFA Vice President, Prince Ali Bin Al Hussein of Jordan. The campaign quickly got the attention of influential personalities and institutions, such as Wilfried Lemke, the UN secretary general’s Special Adviser on Sport for Development and Peace, who urged FIFA President Sepp Blatter to overturn the ban in order to secure equal rights for everybody to play football and thus follow the motto of the FIFA President: “football for all, all for football”.

On 4 March, only a few days prior to International Women’s day, FIFA finally followed the advice from Lemke, Prince Ali and many Muslim female football players around the world. Thanks to a specially designed hijab fastened with Velcro instead of pins, the ban was repealed, and an important step was taken to enable girls and women to take part in the most popular game in the world.

“We will see many delighted and happy players returning to the field and playing the game they love,” said Prince Ali. Wilfried Lemke added that everybody will have “an equal chance to participate in football, without any barriers and regardless of gender, race, ability, age, culture or religious beliefs.”

Football is now really “for all”, and the rules no longer exclude a large share of the world’s population from the football pitches.

For millions of girls and women around the world dribbling and shooting at the football pitch can be the first steps towards inclusion in society, and a symbolic example of the fight to promote gender equality, overcome discrimination and challenge stereotypes. Female Muslim football players who wear the headscarf show that it is not an obstacle to participating and excelling in life and sports.

In Lebanon for example, the Cross Cultures Project Association has been promoting football at the grassroots level for boys and girls for several years. Volunteer coaches for the project have succeeded in attracting many girls to the game – including those who wear headscarves.

This matters not only to the participants but also to the rest of society. As one of the female volunteers said, “I want to change the impression that girls in hijab can’t do anything except sit at home [and be] quiet. By doing sports we can change this and express ourselves!”

One Response to Repeal of Soccer Hijab Ban: ‘A Triumph’