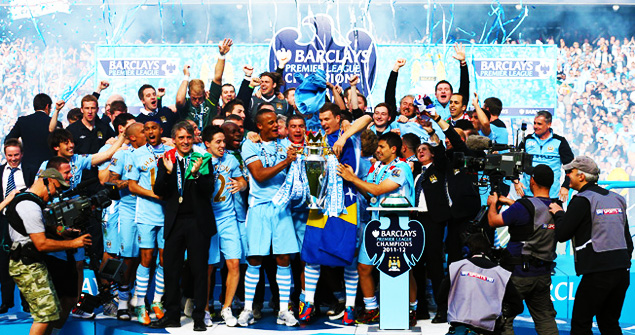 Manchester City, by winning the Premier League for the first time in more than four decades, has defied warnings that money cannot buy soccer success and set an example for Middle Eastern and North African autocrats and wealthy businessmen who employ the beautiful game to strengthen unpopular regimes in what an Egyptian democracy activist describes as the new opium of the people.

Funds were poured into upgrading Manchester City’s facilities: a new office block was built with bars and an entertainment arena for supporters; the Carrington training ground was revamped. The club’s stadium was renamed Etihad Stadium after Abu Dhabi’s premier airline signed a ten-year, $475 million sponsorship agreement with Manchester City.

The Guardian sports writer David Conn notes in a book to be published early next month, ‘Richer Than God: Manchester City, Modern Football And Growing Up,’ that the deprived neighbourhoods surrounding the club ‘s stadium have benefitted little if anything from Sheikh Mansour’s largesse.

Nonetheless, Manchester City fans enthusiastically greeted the Middle East’s first acquisition of a major European club, by wearing Arab headdress and waving British pound notes with the picture of the queen replaced by a Gulf sheikh at the team’s first post-acquisition match. A picture in The Guardian this weekend shows Sheikh Mansour’s portrait featuring on a fake GBP 500 billion note that Manchester City supporters waved at fans of rival club Chelsea.

On the other hand, Real Madrid’s recent decision to remove a Christian cross from its official logo in what it described as the cost of doing business in a globalized world has sparked ire, particularly among anti-Muslim right-wingers. The removal came as Real Madrid embarked on the construction of a $1 billion sport tourist resort in the United Arab Emirates scheduled to open in 2015.

Elsewhere, fans have expressed fears that commercial investment such as new funds that invest in players – Dubai’s United Investment Bank last year launched the Middle East’s first alternative investment soccer fund modelled on similar controversial European funds — undermines a club’s ability to generate funds of its own and often favours vested interests. Opposition last year by fans of Istanbul’s Besiktas to third party acquisition of three Portuguese players – Hugo Almeida, Simao Sabrosa and Manuel Fernandez – was fuelled by unsubstantiated suspicions that the fund involved was a front for club president Yildirim Demiroren, a wealthy businessman who had lent the club just under $100 million.

For Middle Eastern and North African autocrats who have long seen support and control of soccer as a tool to improve their tarnished images, divert attention from widespread grievances and manipulate national emotions the message from Manchester City is that investment in soccer pays political dividends, particularly at a time that the region is wracked by popular unrest. The message is likely to reinforce a tendency to hire and fire managers and coaches depending on how a team performs in its last game rather than in a long-term bid to build a squad’s culture and cohesion. Performance on the pitch is reduced to the prestige of a regime or nation in what to autocratic rulers is a zero sum game.

The message threatens to distort a trend towards professionalization, commercialization and the creation of a proper football industry as a key to unlocking economic opportunity in a world where the soccer pitch is often a battlefield for political, ethnic, religious and gender rights that was sparked by Qatar’s successful bid for the 2022 World Cup.

For many in the region, last year’s Asia Cup final in Doha, in which half of the competing teams hailed from the Middle East with not one reaching the semi-finals, constituted a wake-up call. It is an experience, Middle Eastern and North African leaders and soccer officials do not want repeated at the Qatar World Cup for political reasons as well as a sense of pride and realization of what soccer can do for their prestige as well as that of their nations.

Manchester City’s victory threatens to send out the message that money rather than political reform, divorcing soccer from the political control of often unpopular regimes and building a strong, cohesive team over time can do the trick.

Similarly, for European clubs there is risk inherent in dependency on wealthy benefactors and in association with Middle Eastern autocrats.

Michel Platini, the head of Europe’s soccer body, the Union of European Football Associations (UEFA) warned his week in the wake of the Manchester City title win that that clubs dependant on the largesse of wealthy benefactors could face oblivion if they failed to maintain a realistic level of spending.

Mr. Platini defended UEFA’s new Financial Fair Play rules developed in response to an influx of wealthy club owners that require clubs to balance their soccer-related expenditure over a three-year period by telling Fox Soccer America: “We have to protect the clubs, because until they pay Manchester City will be happy but if they (the owners) leave Manchester City what is going to happen with this club?”

Under the new rules, clubs will initially be allowed to make a loss of $60 million over the first three years, falling to $36 million from 2015–16. Mr. Platini reiterated that despite the Manchester City success, money was not a guarantee. Clubs that violate the Financial Fair Play rules could be excluded from European competitions.

The experience of some European clubs illustrates the risk Mr. Platini was highlighting. Emirati Sheikh Sulaiman Al Fahim , barely three months after acquiring Portsmouth FC several years ago, sold the bulk of his stake to Saudi property tycoon Ali Al-Faraj amid reports that his flagship Hydra Village project in Abu Dhabi was floundering. Mr. Al-Faraj too had no intention of staying involved for long. Soon after the takeover, he announced that he was selling the club. But with no buyer on the horizon, Portsmouth FC went into receivership.

Geneva’s Swiss Super League club Servette FC and Austria’s Admira Wacker haven’t fared much better. Servette is on the brink of collapse after Iranian businessman Majid Pishyar who acquired it in 2008, filed for bankruptcy earlier this year. Mr. Pishyar, who managed the club on a shoe string, tried unsuccessfully to attract government funding by last year appointing Robert Hensler, a former top civil servant for the canton of Geneva, as vice-president. His earlier efforts to salvage Admira, his first European acquisition, failed too. Servette’s problems come on the heels of the bankruptcy in January of Neuchatel’s Super League team Xamax whose Chechen owner was arrested on charges of fraud and financial mismanagement.

Manchester City chairman Khaldoon al-Mubarak in an interview in Mr. Conn’s book, an excerpt of which was published in The Guardian this weekend, illustrated the benefits as well as the risks of wealthy ownership. Mr. Al Mubarak expressed surprise at the lack of professional administration that Manchester City’s new owners encountered when they took over the club and described how he had introduced a more professional approach. “One of the big surprises was how amateurish it was. I found it shocking in the famous Premier League, to be without such basic functions” as a personnel department, he said.

Mr. Al Mubarak appointed former Arsenal winger Brian Marwood as head of administration. Mr. Marwood showed Mr. Conn a 30-page, colour-coded analysis produced by Manchester City’s new inter-departmental analytic system for a 15-year-old that was being eyed by the club. For major signings, Mr. Marwood said, the dossiers could run up to 50 pages. Before, he said, “it was in people’s heads”,ow, it is a spreadsheet where details are not left to chance,” Mr. Marwood said.

Manchester City is unlikely to be able to comply with UEFA’s Financial Fair Play rules without Sheikh Mansour. The club’s losses for 2010–11, the year before their finances were assessed under the new regulation, were $294 million, the highest ever by an English football club and five times the total the club is allowed in the coming two years.

In Mr. Conn’s book, Mr. Platini’s concern about an evolving unhealthy relationship between money and soccer seemed lost on Mr. Al Mubarak. “Whichever way I asked Al-Mubarak about the instinctive repulsion many people in football have for this kind of “project” – for a rich man to just buy a club, then pour in as much money as it took to buy success – he did not so much defend what they were doing as fail to understand the question,” Mr. Conn wrote.

“If you said football was not supposed to be about which ‘owner’ had the most money, so who could pay the most to players, thereby seducing them to their club, he (Mr. Al Mubarak) wondered aloud how United had won the Premier League so many times, and how anybody could compete with them without money. If you tried to argue that a club should be a club, belonging to the people who support it, that a sporting competition does not seem sporting if it is owned by one rich man spending whatever it takes to stockpile the necessary mercenary talent, you would be describing an abstract idea with which he was unfamiliar, and which did not match reality as it was, and as it was viewed from Abu Dhabi,” Mr. Conn said.

To Sheikh Masour and Mr. Al Mubarak buying a soccer club may be more fun than the oil and gas industry, the mainstay of Abu Dhabi’s economy, but at the bottom line it remains a business. To them clubs are business. “There is an opportunity we have identified and taken hold of. A mid-tier club will move to become a big club because of the financial resources we are able to make available. Because we see value in making that transition. And that is the bottom line,” Mr. Conn quoted Mr. Al Mubarak as saying.

Beyond the financial dependency risk, European acquisition targets also run the risk of being associated with regimes potentially capable of using brute force to suppress popular demands for greater freedom. The UAE has reacted to the mass protests sweeping the Middle East and North Africa by targeting possible dissent at home while investing more than $500 million in the creation of an armed force headed by former Blackwater security company head Eric Page in the eventuality of an outbreak of protests at home.