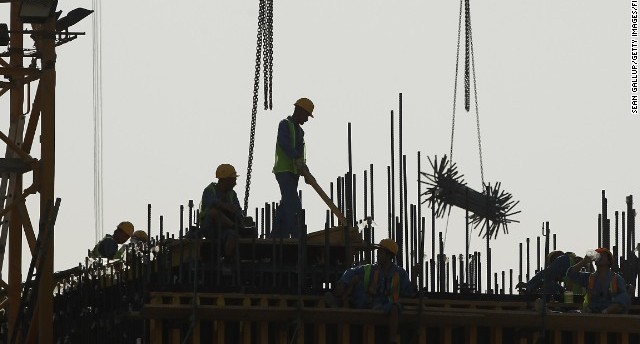 Controversy over conditions for unskilled and semi-skilled workers in Qatar involved in the construction of World Cup-related infrastructure as well as for flight attendants of Qatar Airways, the 2022 tournament’s likely official carrier, has moved center stage as world soccer body FIFA prepares to debate next week the Gulf state’s hosting of the 2022 soccer tournament.

FIFA’s focus is on whether to move the tournament from summer to winter because of Qatar’s harsh summer temperatures that can exceed 40 degrees Celsius. FIFA however will find it difficult to maintain a narrow concern for the welfare of players with no regard to the army of workers involved in constructing billions of dollars in World Cup-related infrastructure. Beyond reputational damage, the debate over workers’ rights and conditions increases the risk of FIFA being pushed to entertain depriving Qatar of its hosting rights, a move that would be perceived by much of the Muslim world as anti-Arab and anti-Muslim.

International trade unions have for the past three years threatened a boycott of the World Cup if Qatar failed to improve labor conditions and accept workers’ rights to form independent trade unions and collectively bargain. The issue has taken on added urgency with a report in The Guardian that asserts that 44 workers had died in work-related incidents between June 4 and August 8 and that workers had not been paid, had their passports confiscated by employers, been denied access to free drinking water in the desert heat, and that 30 Nepalese had sought refuge at their embassy in Doha to escape the brutal labor conditions.

Adding to Qatar’s problems, the International Transport Workers’ Federation (ITWF) lambasted this week Qatar Airways, the country’s national carrier, as well as United Arab Emirates carriers Emirates and Ettihad for prohibiting employees from organizing and demanding better working conditions. ITWF said it would lobby the International Civil Aviation Organization (ICAO), which is meeting in Canada to take action against the Gulf carriers. The union objects to stipulations in Qatar Airways contracts that oblige employees to obtain company permission before changing their marital status and entitle it to fire women employees as soon as they become aware of a pregnancy.

Union objections on the grounds that Qatar bans independent labor organizations forced the Gulf state earlier this year to withdraw its proposal to move ICAO headquarters from Montreal to Doha. Qatar Airways CEO Akbar Al Baker was quoted by Arabian Business as saying at the time: “If you did not have unions you wouldn’t have this jobless problem in the western world… It is caused by unions making companies and institutions uncompetitive and bringing them to a position of not being efficient. If you go and ask the politicians in most of the countries in the western world they would love to have the system we have: where the workers have rights through the law but they do not have rights through striking and undermining successful institutions that provide jobs to their knees.”

Qatar Airways was last year the target of an online call for a boycott by hundreds of Qataris who objected to its employment policies as well as the fact that it operates a shop in Doha that sells alcohol and pork to foreigners.

Qatar has responded to international criticism of its labor conditions by seeking to improve working and living conditions, including stricter enforcement of timely payment of wages, limiting the number of workers permitted to live in one room, planning a city for foreign workers who account for 94 percent of the Qatari workforce and enhancing leisure opportunities, including the creation of a soccer league for foreign workers.

The Qatar 2022 Supreme Committee that is responsible for organizing the World Cup issued a Workers’ Charter earlier this year that pledged to meet international standards with the exception of the right to independent trade unions and collective bargaining. Qatar Foundation, the institution that funds educational and social projects, is working on a similar charter. It is also looking at streamlining recruitment to cut out middlemen and agents that charge onerous rates and are responsible for workers’ huge debt burden.

In a response to The Guardian story, the 2022 committee said: “Like everyone viewing the video and images, and reading the accompanying texts, we are appalled by the findings presented in The Guardian’s report. There is no excuse for any worker in Qatar, or anywhere else, to be treated in this manner. The health, safety, well-being and dignity of every worker that contributes to staging the 2022 FIFA World Cup is of the utmost importance to our committee and we are committed to ensuring that the event serves as a catalyst toward creating sustainable improvements to the lives of all workers in Qatar.”

Qatari executives note that one offset of the awarding of the World Cup is the fact that workers’ rights and working conditions are on the table and that steps are being taken to address the situation. “While construction on work relating directly to the 2022 FIFA World Cup in Qatar has not yet commenced, we have always believed that hosting the 2022 FIFA World Cup in Qatar could be the catalyst for positive change, particularly for accelerating human and social development in Qatar,” the 2022 committee said. The committee said the government was investigating companies identified in The Guardian report.

Qatar has so far however refrained from steps to abolish the onerous Kafala or sponsorship system that makes employees virtually beholden to their employers a step that could convince trade unions and human rights activists that it is serious about reform. The Guardian report signals that on many of the issues such as timely payment, return of passports after completion of immigration procedures and access to water, Qatar is lagging in enforcement rather than in legislation and regulation.

The unanswered question is why Qatar has failed to tackle the Kafala system head on and allowed it to fester. Writing in Open Democracy, Michael Stephens, a researcher at the Royal United Services Institute (RUSI) Qatar, noted that a majority of Qataris acknowledge that their country’s labor system is in desperate need of reform. Kafala, moreover, is disliked not only by employees but also by many employers because it makes them liable for whatever the worker does during and outside of working hours. Mr. Stephens argues that authorities understand the need for change but are not giving it the priority required to stop further damage to Qatar’s reputation.

Yet, at the same time, he concedes that conservative forces and at least some business circles oppose abolishing kafala. “Business interests are often the hindrance, and the young Emir, like his father will need to work hard to combat those companies, including many western entities that accept and propagate the system that stands against the interests of a majority of the country, local and foreign alike,” Mr. Stephens wrote referring to 33-year old Sheikh Tamim bin Khalifa Al Thani who became emir in June after his father, Sheikh Hamad bin Khalifa Al Thani, abdicated.

A recent study by researchers of Weill Cornell Medical College in Qatar concluded that the cost of maintaining the labor system went beyond reputational damage. The researchers concluded that Qatar would be near the top of the United Nation’s Human Development Index (HDI) if adjustments were made for the country’s large population of migrant workers. With other words, the system undercuts Qatar’s soft power effort designed to project the Gulf state as a cutting edge, 21st century knowledge-based society.