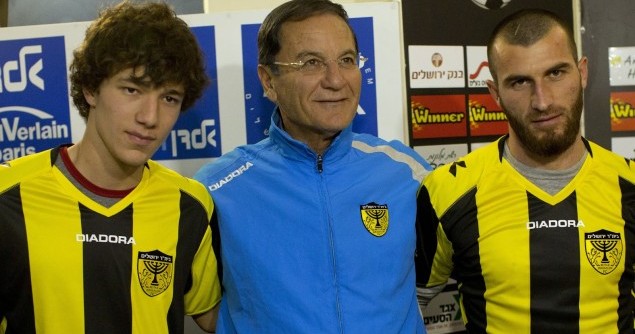 When militant supporters of right-wing soccer club Beitar Jerusalem last month vowed to keep their team pure in protest against the hiring of two Chechen Muslim players they went beyond what are usually accepted expressions of racism in Israel to unwittingly challenge a founding principle of Israeli foreign and defense policy coined by the country’s first prime minister, David Ben Gurion: the need to ally Israel with non-Arab Muslim nations to compensate historically for the lack of and more recently uncertainty of its relations with Arab neighbors.

In doing so, they provoked a rare national outcry against the club’s racist policy – Beitar Jerusalem is the only top league club to have never hired a Palestinian player despite the fact that Palestinians rank among the country’s top performers – that in many ways reflected last month’s outcome of national elections and a growing awareness that Israeli policies are alienating even its closest allies. Prime Minister Benjamin Netanyahu’s Likud party emerged narrowly as the winner from an election that showed Israel deeply divided between the right and the left.

In an illustration of Beitar’s importance to the Israeli right, two right-wing Israeli parliamentarians, Michael Ben-Ari, a former member of assassinated right-wing rabbi Meir Kahana, and Aryeh Eldad of Otzma L’Israel, attended a Beitar match on the eve of the elections in a bid to garner suoppert.

The outcry nevertheless included denunciations by Mr. Netanyahu himself, like many right-wing Israeli leaders, a staunch supporter of Beitar, the storied bad boy of Israeli soccer. It also reflected however unease among significant segments of Israeli public opinion with their country’s increasing isolation sparked by controversy over Israel’s settlement policy; mounting criticism of the treatment of prisoners, including last year’s release of a hunger striking Palestinian national soccer team player as a result of international pressure; and the rupture in relations with Turkey in the wake of the killing of nine Turks aboard the Mavi Marmara as it sought to break Israel’s sea blockade of the Gaza Strip.

The prisoner issue threatened this weekend to explode with thousands of Palestinian prisoners staging a 24-hour hunger strike and hundreds of Palestinians demonstrating in the wake of the death of a 30-year year old Palestinian arrested on charges of stone-throwing while he was in Israeli custody. Palestinian officials warned that the prisoner’s death could be the spark that ignites the powder keg of discontent on the West Bank and in the Gaza Strip.

Conditions in Israeli prisons have further undermined Israel’s relations with its staunch ally Australia, already strained by the use in 2010 of Australian passports by Israeli agents believed to have been responsible for the killing of a Hamas operative in Dubai, after news leaked earlier this month of the death in Israeli custody of an Australian national, Ben Zygier. Mr. Zygier reportedly was an operative of Mossad, the Israeli intelligence service, who allegedly was on the verge of revealing details of Israel’s use of foreign passports in its covert operations.

Australia, in an unprecedented break with past unrestricted support of Israel, last year joined 26 of the 27 members of the European Union who either voted in favor or abstained from voting for a United Nations General Assembly resolution recognizing Palestinian statehood. “In a world so interconnected and interdependent, Israel cannot afford to lose the international legitimacy that flows from a readiness to make peace. There are myriad obstacles to an agreement with the Palestinians – many of them on the Palestinian side. But Mr. Netanyahu has redefined the issue in international opinion as one essentially of Israeli intransigence,” said columnist Philip Stephens in this weekend’s Financial Times.

The current outcry stems from the fact that a militant segment of Beitar’s supporters rejected the club’s hiring of two non-Arab Muslim players, who moreover hail from a region that Mr. Ben Gurion would have defined as part of the non-Arab Muslim periphery, which Israel has always sought to engage. It comes amid growing concern in Israel about mounting soccer violence that is not always related to Israel’s dispute with the Arab and much of the Muslim world.

The outcry over racism expressed towards the two Chechen players contrasts starkly with the lack of a national response to past outbursts by militant fans, including an attack on Palestinian shoppers and workers in a Jerusalem mall as well as Jewish musician who denounced their attitudes and Beitar’s refusal to hire Palestinian striker Mohammed Ghadir who in late 2011 volunteered to join the club in a challenge to its anti-Palestinian policy.

Despite the fact that the militant fans’ language and symbolism at times is reminiscent of that of the Third Reich – fans unfurled a banner with their demand to keep their club pure that was reminiscent of those employed by the Nazis – Beitar until recently defended rather than condemned its most extreme supporters. The long overdue outcry is moreover itself not free of racial attitudes.

To be sure, President Shimon Peres appealed in a strongly worded letter to Israel Football Association president Avi Luzon “to all football fans to refrain from all expressions and manifestations of racism in football stadiums and outside of them.  Racism has struck the Jewish people harder than any other nation in the world.  The authorities must prevent it before it starts. Today, sport is a universal declaration against racism. It is unacceptable for the opposite to take place in Israel.”

Mr. Peres’ appeal however hit deaf ears within Beitar. While the club’s owner, Russian-born Arkady Gaydamak, echoed the president’s remarks, Beitar coach Eli Cohen drew a distinction between Arabs and Muslim in a perversion of Mr. Ben Gurion’s principle. “I don’t understand the fans who don’t want to see a Muslim player in Beitar. There are a billion Muslims in the world and we must learn how to live with them. There is a difference between a European Muslim and an Arab Muslim, and the fans here have a problem with Arabs living in the Middle East,” Mr. Cohen.said.

The club’s spokesman, Assaf Shaked, went as far as explicitly defending its anti-Arab policy. “We are against racism and against violence and we pay a price for our fans. But we aren’t going to bring an Arab player just to annoy the fans,” Mr. Shaked said.

The row over Beitar’s racism goes to the heart of Israel’s increasingly troubled international relations, an increasing sense that it bears substantial albeit not sole responsibility for the failure so far of the Israeli-Palestinian peace process and its strained formal and informal relations with a majority of the Arab world. Israel’s strength no doubt is its ability to discuss such issues publicly. The question is whether this debate will spark the necessary soul-searching.