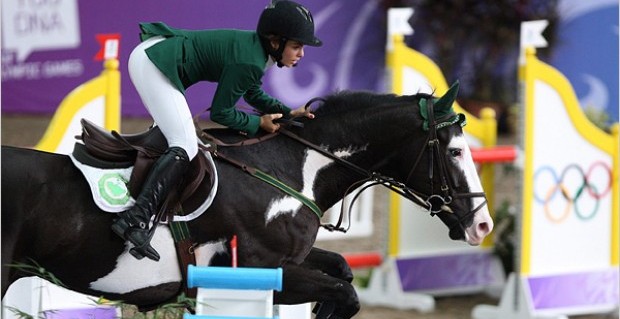 Crown Prince Nayef’s surprise announcement that Saudi Arabia expects to field at least one woman athlete in the Summer Olympics in London has sparked optimism among some women that the door to female participation in sports has opened a bit wider. Yet some Saudis caution that women should not sacrifice religious faith to appease Western critics of Saudi culture.

Saudi Arabia has come under withering criticism in the past year for its failure to provide physical education opportunities for girls at public schools and for preventing professional women’s sports teams from organizing. Human Rights Watch has been especially critical of the Saudi government, issuing a 51-page report in February documenting systematic discrimination against women in athletics.

However, Crown Prince Nayef, regarded as a hardliner who maintains that Saudi Arabia adheres to the ultra-conservative Salafist ideology of Islam, followed King Abdullah’s game plan to broaden women’s rights. Women in recent months were given the right to vote, run for public office and to work in lingerie shops.

But women still do not have the right to drive an automobile in urban centers or travel abroad without a male guardian.

By participating in this summer’s London Olympics, Saudi women move a significant step closer to gaining rights that by competing on the international stage in football, basketball and other fields. The IOC will make a final decision on Saudi Arabia’s proposal in May.

“Islam encourages modesty for women, and to my knowledge there is nothing in the Qur’an and Sunnah [the teachings of the Prophet Muhammad] that discourages sports or exercise,” Omar told The Media Line. “The prophet raced Aisha, his wife, twice in their lives. Women rode horses in jihad excursions. Doesn’t that count for exercise? In fact, they are doing so in full view of men, albeit while covered.”

Fouzia Muhammad, 51, a teacher in Madinah, told The Media Line, that she now sees possibilities for her youngest daughter to compete in organized sports.

“I never had the opportunity to play sport when I was a teenager, and neither did my oldest girls,” Muhammad said. “But my youngest is 12. Hopefully by the time she is in secondary school, the government will see the benefit of having girls play sport.”

A likely candidate for the summer games is 18-year-old Dalma Rushdi Malhas, a Saudi equestrian who captured the bronze medal at the 2010 Youth Olympics.

Malhas’ medal win followed years of training. There are few, if any, Saudi women capable of competing at the Olympic level in any sport. However, the IOC often provides waivers to allow developing nations to send athletes under special conditions.

Although Saudi sports broadcaster and amateur footballer Reema Abdullah announced this week that she was named as one of 8,000 people to carry the Olympic torch in pre-games events, not all Saudis are convinced female participation is a good idea.

Saudi women who have made inroads in generally regarded masculine professions have not fared well. Saudi race car driver Marwa Al-Eifa and film director Haifaa Al-Mansour have garnered little support or attention from the Saudi media for their groundbreaking efforts to help Saudi women gain a foothold in sports or the arts. Both woman work in Dubai, where they can freely pursue their professions.

“There’s nothing special about these kinds of women, who show off to gain fame,” said Maryam Abdulkader, 41, a marketing professional based in Jeddah. “Why should Dalma Malhas be a role model for girls when every curve of her body is exposed for the world to see? My husband could never show his face to his family again if our daughters chose this path.”

Abdulkader echoes a wide-held belief among conservative Saudis that public displays of athleticism by women is shameful. Female role models should be limited to religious figures, such as the prophet’s wives, Aisha bint Abi Bakr and Khadija bint Khuwaylid, she said.

“Saudi Arabia is being pressured by the West to conform to their idea of morality,” Abdulkader said. “They have taken the hijab and made it a weapon against us. There can’t even be a discussion of Islamic modesty without Westerners turning it into some kind of extremist thought perpetuated by crazy Saudis. They [the IOC] will slowly chip away at a woman’s modesty to conform to their idea of what a athlete should wear and soon women will be stripped of all dignity.”

Umm Omar sees it differently, noting that Islam allows wiggle room. “As long as Muslim women are not compromising their religion and observing hijab, why not take advantage of concessions in Islam where it does not explicitly prohibit them from participating in sports like the London Olympics?” she said.

Umm Omar pointed to many sporting events that allow women to remain modest yet competitive.

“There are some sports where Muslim women can observe hijab and not be encumbered by their sports outfits, provided it is designed in a specific way to not impede their movements yet maintain modesty, like in the martial arts, fencing, skiing, equestrian, archery and shooting,” she said.

Prince Nayef said as much when he told the London-based Arab newspaper Al-Hayat that Saudi women can participate in the Olympics as long as the events “meet the standards of women’s decency and don’t contradict Islamic laws.”

Umm Omar said that getting Saudi women into the Olympics is only the first step.

“It really depends on the woman’s understanding of what constitutes hijab and covering the ‘awrah [intimate parts of the body],” Umm Omar said. “This varies from different sects down to the individual. If she believes that wearing pants is haram [forbidden] unless covered by a garment that doesn’t show the shape of her legs, how will she compete in this way? Can she compete this way? Would the IOC allow her to complete this way?”

One Response to Finally: Saudi Olympic Breakthrough For Women