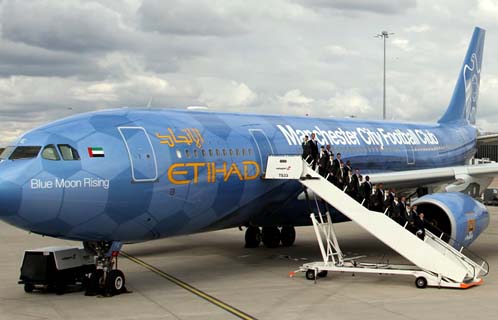 The deal reinforces the club as one of the financial most powerful in the industry.

The agreement dwarfs Arsenal FC’s 2004 deal with Dubai’s Emirates Airways that was valued at $144 million over 15 years. Of the 144 million, $77 million stemmed from shirt sponsorship. The stadium the naming rights were worth only $4.5 million a year.

Soccer clubs Chelsea and Tottenham have both scoured the market for a similar $16-24 million deal but found no serious interest, according to The Guardian newspaper. Newcastle have also been unable to find a sponsor since the club’s owner, Mike Ashley, tested the waters with a short-term arrangement in the 2009-10 season that resulted in their ground taking the name of his sportswear business as the [email protected] James’ Park Stadium.

Etihad’s deal includes a 10-year extension to their shirt sponsorship at City, as well as financial backing for what will be known as the Etihad Campus, a vast area of land around the stadium that already includes the City Square fans’ village, and has other major development planned, including a new training ground and sports science center, according to The Guardian.

Garry Cook, the City chief executive, described it to The Guardian as “one of the most important arrangements in the history of world football,” made even more remarkable because City do not own the stadium. Manchester city council allowed Manchester City to negotiate the naming rights as part of an improved rental agreement under which it will pay the financially strapped authority $32 million over the next five years.

European soccer body UEFA has said it would investigate the sponsorship to ascertain whether it violates financial fair play regulations that stipulate that sponsors with close links to club owners pay a fair price. Manchester City says it consulted with UEFA in advance to ensure that the Etihad deal does not contradict any rules.

Etihad is owned by the Abu Dhabi government while Manchester City is the property of Sheikh Mansour bin Zayed al Nahyan, a member of the Abu Dhabi royal family.

Clubs, in accordance with the financial fair play rules, have to show they can break even in the medium term if they are to take part in European competitions. This could pose a problem for Manchester City that reported a $180 million loss in the past financial year, and is expected to announce an even bigger loss for the current year.

Manchester City is counting on the fact that a significant part of the Etihad funding is allocated for developing the Etihad Campus. UEFA does not include cost for improving infrastructure, regenerating surrounding areas and youth development in its assessment of club losses.

That is unlikely to stop other English Premier League clubs from questioning the deal because it gives Manchester City a significant financial advantage.