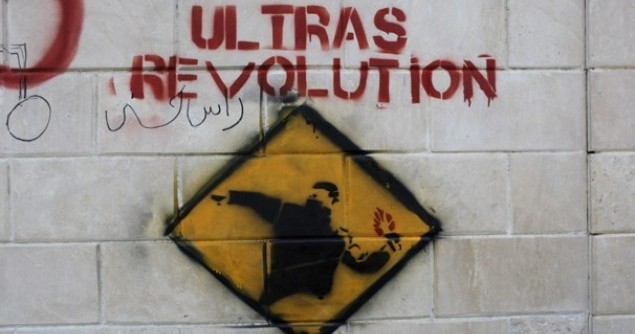 Militant soccer fans, Egypt’s second largest civic group, scored a political with a decision by associates of ousted president Hosni Mubarak to definitively withdraw from elections for the board of the Egyptian Football Association.

The ultras – one of several highly politicised, well-organized, street battle-hardened fan groups – attacked the club’s training ground, the EFA’s headquarters and media organizations to push their demands, which also include a clean-up of Egyptian soccer and media, whom they accuse of corruption and fanning the flames of confrontation; reform of the security forces; depriving the interior ministry’s police and security’s forces — the country’s most despised institution widely viewed as the brutal enforcers of repression under Mr. Mubarak – of responsibility for security in the stadiums; and the resignation of the EFA and Al Ahly boards.

The withdrawal of the two candidates constituted not only a victory in their fight for a clean-up of Egyptian soccer but also in an increasing confrontation between fans, who played a key role in last year’s overthrow of Mr. Mubarak, and players who either stood on the side lines of the popular uprising or supported the ousted leader.

The confrontation spilled this week into the streets of Cairo with players and fans holding rival demonstrations in front of the sports ministry in favour and against a resumption of professional soccer that has been suspended since 74 Al Ahly fans were killed in a politically loaded brawl in February in Port Said.

The EFA has said that the eight-month suspension was being lifted and that professional soccer would resume on October 17.

A newly founded group of players, The Voice of Sportsmen, said last week in a statement on Facebook that it was “extremely important that football competitions are resumed because this is our job and our sole source of income. We created that page to send our message to authorities and make our voice heard.  We also want all Egyptian sportsmen to join us… We would like to fully stress on our support for the rights of retribution for the Port Said martyrs, we want swift justice through the legal channels. But that has nothing to do with football resumption.”

Many Egyptian second-division players, who are poorly paid, have complained that they could ill-afford the consequences of the protracted suspension. Their concern was echoed by players for premier league clubs.

Frustrated with the slow moving legal proceedings against 74 people, including nine security officials, accused of responsibility for the Port Said incident, Al Ahly fans have vowed to prevent the resumption of matches.

“We will never let the football come back in Egypt unless the field is clean from corruption,” said a leader of the Al Ahly ultras.

In withdrawing from the race for the EFA presidency, Mr. Abou-Reida dropped his plans to appeal to the Swiss-based Court of Arbitration of Sport (CAS) a decision last month by the Egyptian body to disqualify him on the grounds that he had been a board member for two consecutive terms and needed to wait for four years before again running for office. Mr. Abou-Reida had asserted that his disqualification constituted government interference.

“I decided not to take any action against the decision to disqualify me. I had a chance to go to CAS but I will not take the matter to a non-Egyptian entity,” Mr. Abou-Reida said this week in a television interview.

Mr. Shobeir, who has repeatedly attacked the ultras in public said that he had “said it from the beginning, if Abou-Reida decided to withdraw then I would withdraw.”

The ultras have accused Mr. Abou-Reida, who hails from Port Said, of having obstructed justice in the Port Said case. They charge that he was responsible for the EFA’s failure to attend a CAS hearing on the banning from soccer for two years of Port Said Club Al Masry SC in whose stadium the lethal brawl occurred. The EFA’s absence led the CAS to overturn the EFA’s banning of Al Masry.