Bigotry and Racism: The Ugly Face of Israeli Soccer 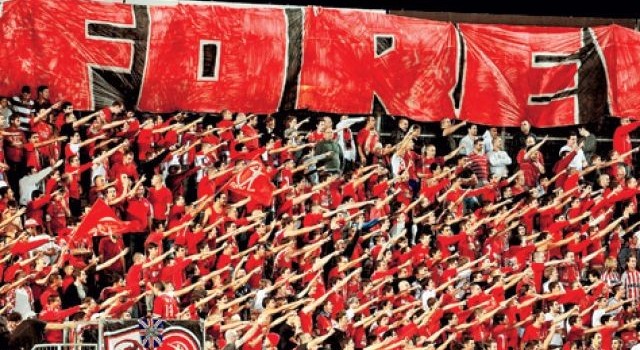 If Israeli soccer pitches are any indication, Israeli attitudes towards Palestinians do not bode well for US Secretary of State John Kerry’s Middle East peace efforts. The story echoing from the pitches is one of racism, racial superiority, bigotry, double standards and little sincere effort to address a key issue that undermines Israel’ s projection of itself as a democratic state founded on the ashes of discrimination , prejudice and genocide.

Miri Regev, a parliament deputy for Prime Minister Benyamin Netanyahu’s governing party and a former brigadier general, illustrated the problem recently on her Facebook page. Ms. Regev called for the expulsion from the premier league of Bnei Sakhnin, a top Israeli club from the Israeli Palestinian town of Sakhnin, because its fans had flown Palestinian flags during a recent match.

“The situation where a [soccer] club receives support from the State of Israel as part of its sports-sponsorship policy, while the club fans are waving the flags of Palestine, is unacceptable,” Ms. Regev said, vowing to introduce legislation against the team in the Knesset, the Israeli parliament. Israeli journalist Shlomi Eldar quoted a spectator as saying that fans in one terrace of the town’s Doha Stadium had waved two small flags.

More serious was Ms. Regev’s omission of the fact that supporters of Bnei Sakhnin’s arch rival, nationalist Beitar Jerusalem, notorious for its militant, racist fan base, had burnt a Quran, the Muslim holy book, during the match. Beitar sparked outrage last year when its fan unfurled a yellow banner in a stadium emblazoned with the words, ‘Beitar, Pure Forever.’

Soccer constitutes for Palestinians what football scholar Tamer Sorek calls an integrative enclave, a space where non-Jewish Israelis are fully accepted in Israeli society and able to flourish professionally without inhibition.

Mr. Sorek tells the story of Israeli Palestinian club Maccabi Kafr-Kana that in the mid-1990s visited Jordan to play against Al Wehdat, a symbol of Palestinian nationalism named after the Palestinian refugee camp in the Jordanian capital where it was founded. The match gained symbolic importance because it pitted two teams projecting a shared identity against one another that have long been divided by more than physical borders.

Residents of Al Wehdat included families that had fled Kafr-Kana when the Jewish state was established. Minutes before the start of the match, Al-Wehdat managers pulled Kafr-Kana’s manager and sponsor, Faysal Khatib, aside to request that he not field his three Jewish players or if he did to ensure that they would not speak Hebrew.

Mr. Khatib refused saying his team consisted of players, not Palestinians and Jews, and that all his players spoke Hebrew, not Arabic. It took Mr. Khatib several days to get his way. When the match was finally played, Kafr-Kana won 3:2. Its three goals were scored by its non-Arabic speaking players.

It’s a degree of standing up for principle that has yet to be matched by the Israeli Football Association (IFA), the only Middle Eastern governing soccer body to have an anti-racism unit and policy, or Beitar’s management, whose efforts to curb the racism of its fans have been limited. The IFA has repeatedly disciplined Beitar for the racism of its fans, but those measures have had little effect.

To be fair, Israel is the not the only place where Israeli and Palestinian identity politics spill onto the pitch. Dutch club Vitesse sparked criticism when it went ahead earlier this month with a visit to the United Arab Emirates despite a last minute decision by the UAE to ban the club’s Israeli defender Dan Mori from entry. Similarly, Jewish groups were outraged when in Chile the Palestine Football Club, founded in 1920 by Palestinian immigrants, included all of Israel in a map of Palestine on its shirts. German club FSV Frankfurt late last year cancelled a sponsorship agreement with state-owned Saudi Arabian Airlines after it discovered that the carrier refuses Israeli passengers.

None of these incidents alter the image of Israel painted on pitches in a country where Palestinians with Israeli citizenship constitute an estimated 20 percent of the population. They like the recent Israeli government announcement that it was licensing new homes on the occupied West Bank, inspire little confidence that Israel is willing to match Secretary Kerry’s commitment to Middle East Peace.

In fact, viewed from the pitch, Israeli reality may have been more accurately depicted by Defence Minister Moshe Yaalon who was recently quoted as saying that Mr. Kerry “who…is acting out of an incomprehensible obsession and a messianic feeling – cannot teach me a single thing about the conflict with the Palestinians. The only thing that can save us is if Kerry wins the Nobel prize and leaves us alone.” Mr. Yaalon was forced to apologize for his comments.