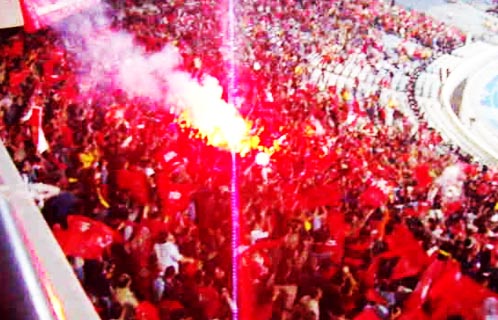 The organizational skills of the ultras, fanatical Cairo soccer fans, are emerging as opponents and supporters of embattled Egyptian President Hosni Mubarak determine the fate of the 82-year old Egyptian leader’s 30-year rule.

The influence of the ultras, supporters of bitter Cairo rivals, Al Ahly Sports Club and Al Zamalek, is evident in the battle tactics employed by Mubarak’s opponents in the struggle for control of Tahrir (Liberation) Square in down-town Cairo.

With an estimated fan base of 50 million supporters, Al Ahly is one of, if not, the largest African soccer club and certainly its most crowned.

The ultras’ experience is also reflected in the setting up of social services for the mass of protesters camped on the square in tents behind barricades and the introduction of a division of labour among them.

Egypt’s passion for soccer was on display on the square with protesters playing football as a pastime until the eruption of deadly violence with the appearance on Wednesday of pro-Mubarak forces determined to dislodge them. At least 13 people are believed to have been killed in the last 24 hours.

As organizations, the clubs said they would not take part from the outset. Yet, they also made clear that they had no objection to their members applying their skills to the effort to topple the Egyptian leader.

In a statement last week, Al Ahly’s ultras said they were determined to remain non-political, but that the group’s members were free as individuals to participate in the demonstrations. “The group emphasizes that its members are free in their political choices,” the group said in a statement on Facebook

The experience the ultras bring to the protests and the confrontation with the Egyptian leader’s supporters is evident in a 2009 video posted on YouTube.

A founder of Al Ahly’s ultras recalls the group’s employment of pyrotechnics already in the group’s early days.

“The biggest game of the season for our ultras is the away trip to Ismailia, which is considered to be the most dangerous game in Africa due to the hatred between the two sets of fans and the political problems that go back to the
1960s,” the ultra leader, who insisted on anonymity, said.

“We decided to organize the biggest pyro show in the history of Egypt: pyro wasn’t widely used in Egypt and not more than two or three at a time, as it was banned by the police and they would arrest you on the spot if you use anything.”

While not certain of the precise identity of the protestors he was watching on video emerging from Egypt, soccer writer Davy Lane noted their degree of sophisticated organization and battle tactics.

“There were designated rock hurlers, specialists in turning over and torching vehicles for defensive purposes and a machine like quartermaster crew delivering projectiles like clockwork on a cardboard platters,” Lane observed from afar.

Much in the way that a municipality would organize services, protestors assigned tasks to various groups such as the collection of trash. They wore masking tape on which their role as for example medics or media contacts was identified in writing.

Street battle-hardened ultras meanwhile joined those patrolling the perimeters of the square and controlling entry. In a reflection of a trend towards greater religiosity evident in Egypt for years, entry to the square is separate for men and women.

In many ways the contrast in sophistication that the ultras bring to the organization and battle tactics of the opposition with its lack of a clearly defined leadership reflects the fact that the driver of events in Egypt as well as the wave of protests sweeping other Middle Eastern and North African countries are youths who initially often rallied around a Facebook group rather than an ideology.

Established in 2007, the ultras — modelled on Italy’s autonomous, often violent fan clubs – have since proven their mettle in past confrontations with the Egyptian police, who charge that criminals and terrorists populate their ranks.

The ultras key role in the rebellion against Mubarak’s rule extends a tradition of soccer’s close association with politics in Egypt dating back to when the then British colonial power introduced the game to the North African country in the early 20th century.

Founded about a century ago as an Egyptians only meeting place for opponents of Britain’s colonial rule, Al Ahly, which means The National, was a nationalistic rallying ground for common Egyptians. Its players still wear the red colors of the pre-colonial Egyptian flag.

Dressed in white, Zamalek, which first was named Al Mohtalet or The Mix and then Farouk in honour of the than hated and later deposed Egyptian monarch, was the club of the British imperial administrators and military brass as well as the Cairo upper class. The clubs’ bitter feud was no less political once Egypt became independent.

Reflecting Egypt’s popular mood when Israel attacked Gaza in late 2008, Al Ahly striker Mohamed Aboutrika, Africa’s 2006 best player of the year, was slapped with a yellow card during an Africa Cup of Nations match in Ghana for wearing a shirt that read “sympathize with Gaza” in Arabic and English.

With approximately half the clubs in Egypt’s national league sponsored by government ministries or state-owned companies, Egypt’s is a different game of soccer. Alongside Islam, soccer was until the revolt against Mubarak’s rule the only legitimate arena where pent-up emotions and anger could be expressed.

“There is no competition in politics, so competition moved to the soccer pitch. We do what we have to do against the rules and regulations when we think they are wrong,” says an El Ahly ultra after his group last year overran a police barricade trying to prevent it from bring flares, fireworks and banners into the stadium. “You don’t change things in Egypt talking about politics. We’re not political, the government knows that and has to deal with us,” said an Al Ahly ultra at the time.