‘Women’s Rights’ Must Be Secured in ‘New Bahrain’ 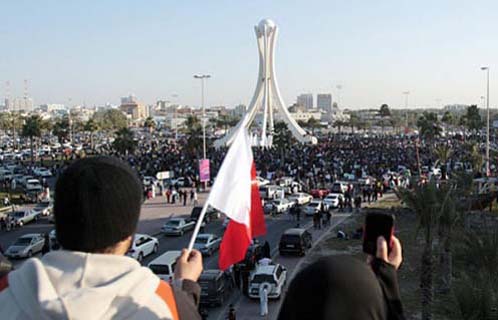 The 2014 parliamentary elections in the Kingdom of Bahrain are already being discussed as an opportunity for Bahraini women to enhance their presence in politics. In the recent 2010 elections, women ran for parliament and municipal offices, and achieved some positive results. But in order to continue this trend, any ruling government in Bahrain must actively support women’s political and civic engagement before the 2014 elections roll around.

Mariam Al Ruwai, President of the Bahrain Women’s Union, an association representing 12 organisations working towards women’s advancement, is also planning to run in the 2014 elections despite not garnering enough votes to advance past the first round of the last parliamentary elections.

Women in Bahrain have made tremendous strides in a very short period, especially considering that they have been marginalised for most of the country’s history. A year after Bahrain’s independence from Britain in 1971, Bahraini men were granted the right to vote and to have representation in parliamentary councils. Women, however, were excluded from voting or running for office.

Accordingly, women’s organisations launched joint efforts to help women achieve their political rights. A joint committee of women’s organisations was formed in 1972 to meet with the Minister of Justice and Islamic Affairs to study the issue of women’s participation in politics. That same year, female activists formed another committee to submit a petition to the Bahraini King Isa ibn Salman Al Khalifah about women’s political rights.

Members of women’s organisations attended a meeting of the country’s founding council to discuss the first article of the draft constitution, which stated that “citizens have the right to participate in public affairs and to enjoy political rights, such as the right to election.” But women’s participation was postponed until Bahrain’s second constitution was promulgated in 2002.

In 2002, King Hamad bin Isa Al Khalifah launched a reform project granting women the right to participate in municipal and parliamentary councils. Thirty-one women and 306 men ran for municipal elections, but none of the female candidates won. Two of them, however, made it to the second round of voting.

The municipal and parliamentary council elections in 2006 saw Latifa Al-Uqoud, a director in the Ministry of Finance, win by default in the Hiwar district, making her the first woman in the Arab Gulf to be elected to her country’s parliament.

Bahraini women must not lose sight of their goals amidst the current chaos but instead use the opportunity to set their sights on seats in parliament in 2014. The government must also take steps to promote women’s presence in elected councils by setting quotas for the number of women in parliament. An endorsement of special measures to support women running for office was put forward by the United Nations’ Convention on the Elimination of Discrimination Against Women (CEDAW), which was adopted by many Arab and foreign countries. Such measures are necessary in light of the refusal by many religious and political organisations to endorse female nominees and the decision to instead divide up the parliamentary seats amongst themselves.

The best solution is to let civil society organisations support women financially and provide the necessary push toward their political empowerment.

The government must also support women’s political organisations, like Awal which carries out awareness campaigns about women’s rights and calls for women’s accession to decision-making positions in all areas of government and civil society.

There is also Fatat Al-Reef, an organisation that seeks to change women’s image in the media, moving away from stereotypical images of women while working to change the idea that a career in politics is only for men.

Supporting women’s projects and endorsing a women’s quota in parliament are two basic steps toward developing women’s rights in Bahrain. Only then will there be hope that Mariam Al-Ruwai – and others like her – could win. Her presence on the political scene in 2010 was a success in itself, after all. Electoral victories for Al-Ruwai and others in 2014 would be a significant victory for all Bahraini women.

Sana’ Mohammad Bou Hamoud is a lawyer and activist in the field of women’s rights in the Kingdom of Bahrain. This article was written for the Common Ground News Service (CGNews).