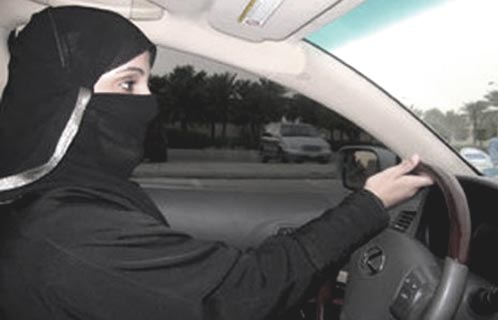 Whenever Hawazen Ebrahim’s family spends an evening picnicking in the desert outside of Medina, it’s her job to jump into the car and drive to the nearest village to load up on extra supplies. During the week, she is responsible for taking the kids to school and picking them up each day.

Ebrahim, 25, doesn’t consider herself an outlaw, nor is she protesting Saudi Arabia’s ban on women driving. She does what many Saudi women do in rural villages throughout the kingdom and drives as part of the everyday responsibilities of managing a household.

Saudi Arabia is regularly criticized by human rights groups and the foreign media for its ban on women drivers, but when it comes to rural areas, the authorities have what can best be described as a “don’t ask, don’t tell” policy. Women who keep a low profile can drive. It’s the worst kept secret in the country.

“The women in my family and the families in my neighborhood think nothing of driving,” says Fawzyyah Hassan, 45, who tools along the roads in areas near Medina. “My husband goes to work before we even get up in the morning and comes home late. Of course, I drive.”

Saudi Arabia’s driving ban isn’t strictly speaking illegal since there is no actual law on the books that prevents women from driving. Sharia – the Islamic code of law – doesn’t address the issue.

Indeed, Abdullah Alami, a Saudi economist who is spearheading the latest campaign to make end the ban, says the law implies that women are permitted to drive. Alami is fighting a quixotic campaign to get the Shura Council, the body that advises the King on policy, to consider a petition allowing women to drive.

“You see, Islam calls for protecting women’s legitimate rights,” Alami told The Media Line. “Driving is a right for women, as it is for men. Article 32 of the Saudi Traffic Regulations provides that. It’s prohibited for any ‘person’ driving a vehicle before getting a driver’s license. Based on this text, the term ‘person’ isn’t limited to males.”

Women caught driving in cities don’t face arrest. A Saudi journalist explains that local police agencies follow a basic policy by taking the offending female driver to the police station and having a mahram (male guardian) come to collect her. At the station, the police require the guardian to sign a document promising never to allow his charge to drive again. Refusing to sign the document exposes the guardian to jail time for failing to discharge his duties the protector of the woman.

“I have to admit I never heard of any guardian being arrested because his daughter drove a car,” the journalist says.

Although Saudi Arabia keeps no statistics on how many women drive cars, large numbers routinely get behind the wheel in virtually every rural community where hundreds of miles separate towns and villages.

While men are at work, wives and mothers transport livestock to market and drive tanker trucks to ensure their villages have water. Many Bedouin women act as the principal breadwinners in the family by transporting goods from village to village. Unlike in urban areas, a woman driving in the desert isn’t taboo, but encouraged.

“There is evidence that women who drive in remote villages have earned respect for following traffic regulations,” Alami says. “It’s natural for women in rural areas to assist in making a living in every way possible.”

In 2009, there were so many women driving in the Ha’il region that the Commission on the Promotion of Virtue and Prevention of Vice (the mutaween) filed a complaint with the administrative authorities asking that 15 women be stripped of all driving privileges. The local authorities ignored the demand because it posed a threat to the families’ livelihood.

Women in the hinterlands have few alternatives to getting behind the wheel. The typical family car in rural areas is a pickup truck with a single bench to seat three people in the cab. But women can’t sit beside a male driver because it puts them in a state of khalwa (seclusion with an unrelated man), which is forbidden. Families can’t afford to hire a professional driver because that would cut into the family income.

In any case, it’s virtually impossible for traffic police and the mutaween to patrol thousands of square miles of desert.

But the acceptance of women driving doesn’t extend to cities, where the ban is enforced. Women passengers sitting alone in taxis or cars with private drivers face harassment from men. The harassment has made many families fearful of allowing their daughters or wives to be alone in a car.

Alami, however, says that is no longer a valid concern. “People are more convinced today than ever that there is no justification for preventing women from driving,” he says. “Saudi women continue to drive in various countries around the world. It has become more acceptable for them to drive in their own country.”

There is also anecdotal evidence suggesting that police sometimes turn a blind eye to women driving in the city, at least in Jeddah where a large swath in the northern part of the city is inhabited mainly by wealthy Western-educated Saudis. Police officers are often reluctant to confront influential families that tacitly approve of their daughters and wives driving.

A 26-year-old woman, who asked that her name not be published, says she recently went on a driving spree with a female friend in North Jeddah. “I have a new Hummer. It was late at night and the streets were empty, so we were driving all over the place,” she recalls. “A policeman pulled me over. He said, ‘Don’t drive in the City Centre or to the south,’ and let me go. He acted like it was the most natural thing in the world.”

Alami says rural women could serve as role models to their urban sisters. They get behind the wheel to put food on the table and don’t bother themselves with the restrictions their urban counterparts face.

Last month, Alami sent a petition signed by 136 Saudis, including 98 women, to the Shura Council. The petition asks for consideration of a trial-driving phase. The Shura Council can forward a recommendation to the Council of Ministers for approval if it agrees the plan has merit. The petition seeks to specify driving schools available to teach women driving and to issue driving certificates. It also asks that police departments develop women’s sections to handle licensing and violations issues. A key component of the petition asks that stiff jail time and fines be imposed on people harassing female drivers.

A representative for the Shura Council says there was no record of the Council receiving the petition. Alami is undeterred. He is preparing a second petition and seeking additional signatures.

“Saudi Arabia has signed the international conventions of non-discrimination against women,” Almani says, referring to the United Nations’ Convention on the Elimination of All Forms of Discrimination Against Women. “It is crucial that women aren’t discriminated against, including, and not limited to, driving.”