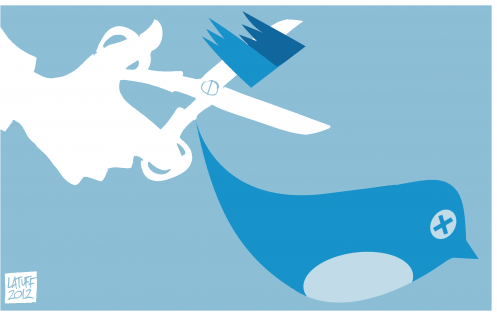 Twitter, the social networking tool, has announced a new policy on censorship. The change ignited an Internet firestorm, including Twitter accounts set up to lambast the decision.

In its announcement, Twitter explained that as a company with global reach, it falls under the purview of multiple laws. Many of these laws are not consonant with US laws and understandings on matters like freedom of speech, nor of many other countries. Nevertheless, it has to abide by local rules or face local consequences, including being blocked entirely within a country and possibly facing criminal charges. It cites French and German laws that prohibit – and criminally punish – anything construed as pro-Nazi as examples. Of course, there are countries that ban much more broadly than that, including repressive countries and countries that try to stifle public discontent by blocking their voices.

Up til now, Twitter, under the orders of a government, could only block a particular tweet across the whole world. It now has the capacity to block its being seen only in the country that claims offense. That means that while the people of Country X may not be able to see a message originating in Country X, the rest of the world can see it. Further, Twitter promises that it will block a tweet only after it has been published and a government calls for its removal and that it will publicly note that the government has called for its removal. In other words, it won’t simply ‘disappear’ the tweet.

While this is not ideal in terms of the utterly free flow of information, it adds considerably to the quality of transparency. No more will we be faced with situations like those that arose in Saddam’s Iraq where, for instance, CNN operated on a policy of self-censorship but never reported that fact to the public. Here, at least, the public will know when a government is exerting its heavy hand.

The UK’s The Guardian has a piece on the Twitter decision stating that calls to boycott Twitter may not be in the best interest of those interested in the actual free flow of information.

Twitter boycott? No, let’s trust it
Censorship fears are misplaced, tweets from the Middle East will still buzz around the world
Mohamed El Dahshan

When Twitter announced it was giving itself the ability to censor particular tweets or users in certain countries, the immediate reaction among users of the network in the Middle East – as elsewhere – was: #sh*t.

Without overplaying its importance, Twitter has proved to be an invaluable tool for activists, enabling them to find up-to-date, accurate information and news, to publicise and to communicate among themselves, particularly in times of crisis. The hashtag #egypt was the most widely used on the social network in 2011, and a Dubai School of Government survey estimates Egypt had the largest number of active Twitter users in any Arab spring country.

Such is the fear of governments from social networks, particularly Twitter, the service has repeatedly been blocked in Egypt, Saudi Arabia and elsewhere.