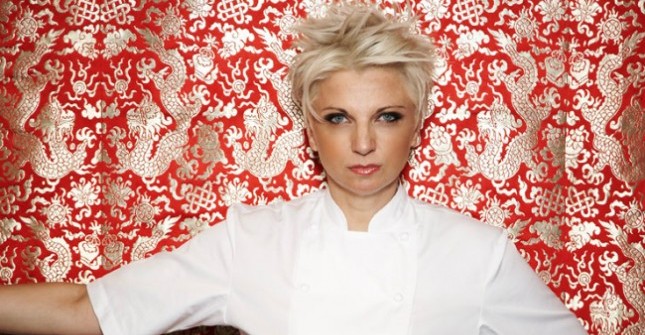 “Do you like it here? Is there culture?” she asks. I’m supposed to be interviewing her, but she’s putting out feelers – she’s considering moving here, and bringing her cuisine with her. Studying her, it’s not hard to imagine her fitting in.

Gold mirror glasses, leopard print tee with sparkle, harem pants, wild hair, bare feet, tan to die for. She’s sitting cross legged in a lounge at i-Kandy, talking a million miles an hour. Hands flying, chin forward, interested in what I have to say about Dubai, what she has to say about herself, and it appears, anything at all that can be delivered by well-positioned conversational tangent.

Before Silvena Rowe came to Dubai, she had believed it to be vulgar – a place of no substance. Why even bother? But since a pivotal return to her roots after the death of her food-loving father from Turkey, her connection to its cuisine has intensified. After food safaris and some self-teaching in Turkey and Syria, the writing of a book (Purple Citrus and Sweet Perfume – with foreword by Heston Blumenthal) that details her findings, and the opening of Quince (modern, Ottoman inspired cuisine in Mayfair), she has realised that a move to the Middle East is vital to her progression.

It would not be Damascus, her ‘favourite city in the world’, it needed to be stable, modern, livable, and essentially ready for her cuisine. Dubai called her, and dreading it, she arrived for the first time some months back. She stayed at Al Maha, avoiding the glitz of the city, saying to herself that she could just stay there. But business brought her out into our forest of tall towers eventually – and what did she find? It surprised her, smacked her in the face with its sophistication and style. There was more to Dubai than she had thought. This just might work.

She’s one of those women who actually fit the ‘larger than life’ moniker. As she uncurls her legs and repositions, I realise how tall she must be. One lengthy limb now dangles over the arm of the chair as she arranges herself in a more appropriate angle to deliver rays of sun onto her bronzing neck and shoulders. She never stops talking. She says again that Dubai is pulling her, emotionally and vocationally. She’s got meetings on the go – three companies bidding for her.

Silvena’s food is strongly influenced by the Middle East, and it’s an inevitable step. She says she’s not flogging a brand that she will visit three times a year, not like some other restaurant brands that arrive here just to take their share of the gold that lines the roads. No – for her it’s different. It’s not just because Dubai is the obvious hub in her adored M.E. It’s also because there is a gaping hole she must fill – modernised, westernised regional cuisine. It’s a surprise nobody’s gone there before her.

Middle Eastern restaurants in Dubai all serve the same dishes – moutabel, tabouleh, kofta, shawarma, baklava and rich, fragrant rice dishes like maglouba and biryani. Sometimes that’s a good thing. Rowe herself admits to a love of moutabel that borders on fetish. It’s consistent. You know what you are getting. It makes it easy to measure the standard of the food – if they can’t make a decent fattoush, then it’s not a great restaurant. Like other world-wide stalwarts – things like Champagne, pizza, pho, Thai green curry – many MENA (Middle East North Africa) tastes that are more than something you put in your mouth – a brand, almost, that guarantees the same thing every time.

But how boring would  Champagne become if that’s all you ever got to drink? And imagine how less crisp and clean it would be without modern techniques in the winery… This is the equivalent of what we’ve got happening here in Dubai with regional cuisine. The same old recipes – things that have not changed since the fall of the Ottoman empire. And as much as I know they’re onto a good thing, I’ve pretty much had cardboard-flavoured humous up to the eyeballs, and I doubt I’m the only one.

Think about progress in the region since that Ottoman fall in 1914 – and how that has impacted the life and culture. Wealth, govenrment, globalisation and technology have affected most aspects of the lives of the people all over that empire, and further afield into my current home country, the UAE. In the most part, particularly so here, it has been embraced with a fervour that is all-consuming. Fast cars, spectacular architecture, haut couture, the world wide web.

Emiratis are some of the most accepting citizens of modern culture in the world. And yet, the recipes of regional food have been largely ignored, left stagnating like a pond of sour water. It’s lazy, and doesn’t fit. Why is this? Sure, it’s nice food, but it’s not entirely appropriate to modern day Dubai life. All that sugar, ghee and starch is converting into obesity, diabetes and heart disease. We must also ask what picture it paints for visitors? It shows a nation that takes on other cultures but leaves its own to wither and date. Which does not fit the profile in aspects other than food.

As a contrast, Rowe offers recipes that embrace tradition and modernity simultaneously. I can see an affinity with colour, aromatics and texture. Her fervent nature has convinced me to buy her book (130AED at Kinokinuya). Expect dishes like beetroot moutabel with tahini and toasted orange peel, wild greens and feta borek, kadafai schnitzel with pomegranate sauce, cumin and sumac-crusted barramundi with avocado hummus, pumpkin and za’atar hummus, yoghurt pannacotta with apricot mousse, pink peppercorn and cardamom meringues with mulberries and white chocolate. I seriously cannot wait until she arrives.

Silvena Rowe has registered the name ‘Ottoman Cafe’, which she hopes to open in Dubai before the end of this year. She also has high hopes of a retail offering similar to Carluccios or Dean and Deluca. Her plans are to live here – her first time as a resident in the Middle East, at least for 3 weeks out of every month (Ottoman Cafe will also open in London over coming months). She also has plans for bringing back the Levantine breakfast with a bang, so don’t just expect something fine dining and inapproachable – she wants something for everyone.

If you would like to see Silvena Rowe in action, you can catch a glimpse on BBC2 here, or have a look at this manic montage

Until she does arrive, there are a few fine dining Middle Eastern restaurants in Dubai that are worth a look at, although at this stage none really break out of the square. Great restaurants, even if their chefs (or concept providers) could possibly be accused of having a lack of imagination.

I also love Zahr el Laymoun, which is more casual but serves some interesting home-style food at a great price at Souq al Bahar.

If you feel like something more North African, try

And of course Almaz by Momo, a personal favourite for a cheaper lunchtime pastilla hit.

Abu Dhabi gets a little closer to modern Middle Eastern nosh with restaurants like award winning Li Berut, which offers Lebanese fusion at Etihad Towers. Another recent addition is Ornina, which offers dishes with more of a southern Mediterranean and North African vibe, which tends to be fused with expensive ingredients from Western Europe. Fabulous pod-style venue, but as yet receiving very mixed reviews.

I’d appreciate any other recommendations, and if anyone has an update on Greg Malouf’s recent sniffing out of the city, I’d like to know about that too – there were rumours, but the trail seems to have gone cold…