‘The Tripoli I Know’: Shisha, Ice Cream and Friends 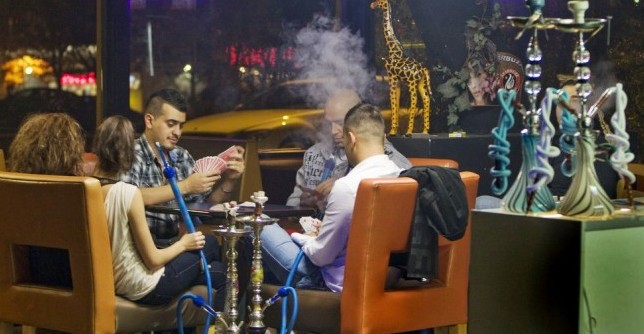 Lebanon’s second largest city Tripoli has a violent reputation due to ongoing conflict in the neighborhoods of Bab al Tabbaneh and Jabal Mohsen. Previously one neighbourhood, these two communities were divided along political lines during Lebanon’s 15-year civil war (1975-1990). And due to Lebanon’s complicated political history with Syria, tensions have been inflamed by the neighbouring conflict, resulting in sporadic armed conflict.

But the Tripoli I know is different. When visiting friends, I join them in shisha (waterpipe) lounges, we go out for ice cream at the renowned Hallab Palace for Desserts and take evening walks at the Mina Port, enjoying sweetened tea with milk from a vendor with a wheeled-cart. Tripoli is no warzone, and I am hopeful that a number of recent youth initiatives in the city can help restore peace to these two neighborhoods.

Residents of these parallel neighborhoods often go to work together; their children go to the same schools, and they sometimes intermarry. Originally one neighbourhood called Bab al Tabbaneh, it was divided during the Lebanese civil war. Bab al Tabbaneh’s Alawite community (a Muslim minority group that accounts for 12 per cent of the Syrian population with pockets in both Lebanon and Turkey) gradually clustered on the side of the mountain (Jabal Mohsen) overlooking Bab al Tabbaneh. This was in part due to tensions between the Lebanese Arab Democratic Party which supported the Syrian regime during the civil war and the Sunni Islamist Tawhid Movement in Tripoli at that time.

These two neighborhoods are also among the most poverty-stricken in Lebanon. Illiteracy, unemployment and population density are all high. Basic needs like electricity, running water and security are not met, enabling power brokers to fuel armed conflict in the area.

But today, there are several initiatives that aim to bridge gaps and create opportunities for dialogue between residents living in Bab al Tabbaneh and Jabal Mohsen.

One unique initiative is TEDxAzmiStreet, named after a busy street that links many parts of Tripoli. TEDxAzmiStreet is a licensed and independently organised smaller version of the well-known TED conference that aims to share “ideas worth spreading.”

During a TEDxAzmiStreet event, live and telecasted speakers give talks on creativity, innovation, personal success stories and solutions to Tripoli’s social, technical, educational and economic challenges. After a TEDx talk, the audience engages in dialogue related to the event’s theme.

Nazih Fino, TEDxAzmiStreet’s curator, explained how audience engagement gives people a chance to express themselves in a place where everyone is heard and thus better understand the needs of one another.

I attended the first TEDxAzmiStreet event in Tripoli in mid-2012. It was a tough time, with heavy gunfire exchanged in Bab al Tabbaneh and Jabal Mohsen the night before. Event organizers found themselves in front of a full-house.

“Nobody expected that people would be able to attend, but they did. They came to say that we are against [the violence] and we can change the future by improving ourselves, taking personal action and improving our chances to live better,” said Fino. The audience’s synergy, the hope in their voices and their strong desire to be heard, communicate and condemn the armed conflict in Tripoli was palpable.

Another initiative, We Love Tripoli – one of the larger online communities in Tripoli – started out in 2007 as a Facebook group of youth from different religious and political backgrounds who wanted to “change Tripoli’s image as an extremist-driven and violent city”. The members of this online community organised themselves and are today a non-government organisation with the mission to “trigger the collective passion to serve our community through advocacy projects, volunteer activities and social media”. On their Facebook page, which has more than 15,000 likes, they promote messages of peace like a photo showing a man holding a message saying: “Alawite, Sunni, Christian, we are all Lebanese”.

When I asked Fino about the common needs of citizens in Jabal Mohsen and Bab al Tabbaneh, he said, “They both need to become engaged as one society and they both need peace.”

Initiatives like TEDxAzmiStreet and We Love Tripoli create opportunities for youth to engage one another and keep them off the streets. Providing individuals – particularly youth— with platforms for open dialogue and chances to engage in constructive projects in civil society, entrepreneurship, activism and technology will surely help make armed conflicts obsolete in Tripoli.

Aisha Habli works as a public relations and media representative and freelance event manager. She is a member of the Lebanese Peace Journalists and MasterPeace Lebanon.