The Textbook Narrative That Demonises ‘The Other’ 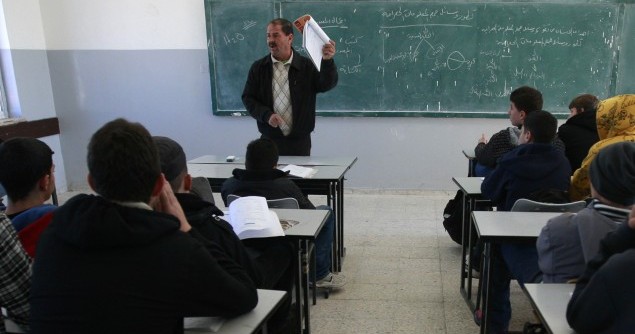 Like so much else that touches on the Israeli-Palestinian conflict, a just-released three-year-long study of how textbooks on both sides portray the “other” has provoked a firestorm of controversy. The fruit of a seed first planted in 2008 by a post-Annapolis Conference committee of Israelis and Palestinians dedicated to promoting education on tolerance, building a culture of peace, and preventing incitement, the study has this week succeeded in generating more heat than light, at least as far as the Israeli government is concerned. But a closer look suggests there is much to be learned – both from the study and from the responses to it.

Entitled “Victims of Our Own Narratives?” and issued on 4 February, the report was commissioned by the Council of Religious Institutions in the Holy Land, a consortium of Islamic, Christian and Jewish religious leaders based in Jerusalem. The US State Department funded the project with a $590,000 grant, supporting a Hebrew-Arabic bilingual research team led by Israeli Professor Daniel Bar-Tal (Tel Aviv University) and Palestinian Associate Prof. Sami Adwan (Bethlehem University).

Yale University Professor Bruce Wexler, a Jewish American who designed the format and managed the research, claims the study – which examined 74 textbooks from the Israeli secular and religious school systems, and 94 developed by the Palestinian Authority’s Ministry of Education and used in the West Bank and Gaza – is one of the most comprehensive, fact-based investigations ever done of school textbooks. The summary findings are eye-opening:

1. Dehumanising and demonising characterisations of the other are rare in both Israeli and Palestinian books.

2. Both Israeli and Palestinian books present national narratives that portray the other as an enemy and in a generally negative light. Historical events, while not fabricated, are selectively presented to reinforce each national narrative.

3. The absence of information about the culture, religion, and everyday activities of the other – including the failure to recognise the other on maps of the region – serves to delegitimise the presence of the other.

4. Negative bias in the presentation of the other is significantly more pronounced in Israeli ultra-Orthodox and Palestinian textbooks than Israeli state school books.

The Israeli narrative emphasises the threats and attacks against Israel by the Palestinians and Arab states, and violence against Jews over the years. The Palestinian narrative, meanwhile, emphasises their displacement from centuries-old villages by immigrant Jews, as well as the loss of freedom, land and control over essential resources during the 45-year occupation. Both narratives present the other as an enemy aiming to destroy or dominate them.

The Israeli government has opposed the study from the beginning, while the Palestinian Authority has embraced it. The US State Department hopes the report will be used constructively, to pursue the sponsor’s “mission of advocating for peace and religious tolerance.”

Professor Nathan Brown of George Washington University, a member of the study’s advisory panel who has extensively studied Palestinian textbooks, supports the project’s findings, but doubts its value because he thinks that in the midst of bitter conflicts, battling factions are unlikely to revise their depictions of “the enemy.” Hence, what’s the point?

Wexler and his team, who recommend that the Israeli and Palestinian education ministries carefully review the content of their textbooks, couldn’t disagree more. “Education makes a difference in shaping expectations, it influences the way [people] view the world,” he told The Guardian newspaper.

All this begs a chicken/egg question: is it education that acknowledges and respects the other’s narrative, or a just and lasting political solution, that will lead Israelis and Palestinians to a respectful, dignified, and peaceful coexistence? Their leaders surely know it can’t happen without both. But this study reminds us that civil society demands, at a minimum, recognition of the other’s history and experience.

Its findings that neither side demonises the other offer real encouragement. But both sides can and must do better. Maps that acknowledge the other’s presence, reflecting a two-sided reality, are among the steps that need to be taken. Likewise, greater exposure to one another’s culture and daily life can change perceptions of the other.

This study suggests that programs of education designed for mutual understanding can help enable people engaged in conflict to release the tight grip with which they hold the exclusive righteousness of their own narratives.

Israeli and Palestinian leaders should take that lesson to heart, and translate it, full-heartedly, into action. When they do, we’ll have a story worthy of the history books.