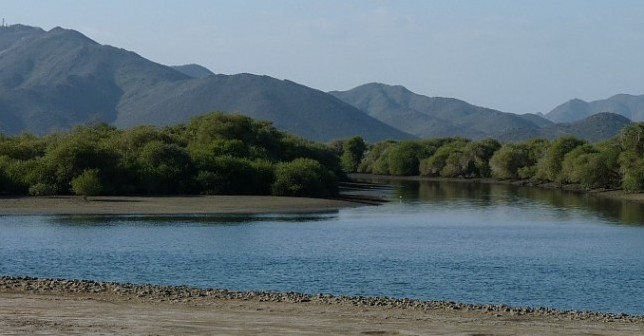 We decided to take a hike north over the weekend – it’s literally years since we were last in Umm Al Qawain and we were feeling inquisitive. It’s amazing how time dulls the curiosity of youth – we used to spend weekends breathlessly roaming around the UAE discovering new stuff, now we rarely bother.

Our connection to the tiny emirate is an odd one. Back in 1993 Sarah agreed to head up the opening of a Choueifat school in Umm Al Qawain – the tiny school was a compound of three hexagonal buildings. Someone had tried to establsh a school there before and it had been closed. Now it was to reopen as a Choueifat with two teachers and twelve kids. We arrived at the school, a gritty track led from the main road to the compound, to find it empty and abandoned. The gatehouse contained a Bangladeshi gentleman called Taimussadin who looked disconcertingly like Catweazle and who patently hadn’t seen a human being in years. The echoing classrooms were dusty, their ceramic tiled floors scattered with abandoned toys and posters.

Umm Al Qawain has changed a bit over the years. The school, which used be next to a barracks in its own huge sandy patch, is now nestled in among villas and tarmac roads. The barracks has gone. The Umm Al Qawain Marine Club is still a marine club, although the riding stables have been eaten up by the Palma Beach Resort – a strange compound of double story chalets and an even stranger ‘bowling club’ in faux-Wafi style, including a massive concrete scorpion.

Back in the ’90s, we learned to ride there, chased around the school by the stentorian tones of Susie Wooldridge barking ‘Mexican reins!’ at us. I used to ride an ancient Lippizaner called Samir who was a workshy, wily old bastard at the best of times. Getting Samir to move beyond a shuffle took enormous effort but every now and then my inexpert foot would tap him in the wrong place and he’d be off executing exhilarating dressage moves as his glorious youth rushed back to him. Then he’d remember his age and go back to his normal moribund state.

They had two camels they’d taught to do dressage, Larry and Alexander. Quite the sight, I can tell you.

Umm Al Qawain’s old town area remains fascinating, still crumbling now as it was then, a collection of winding streets with coral-walled houses topped by wind towers. It was to have been developed into a ‘mixed use’ area. Selfishly, I’m quite glad the plan didn’t materialise. Beyond it the gorgeous beach at the tip of the promontory, fading signs proclaim this to be the site of the Radisson SAS Resort – a development that doesn’t have appeared to have survived the crunch. The huge villas that line the seaward facing coast are bizarrely now all abandoned, glorious 1970s concrete masterpieces, their owners appear to have moved to the creekward coast, leaving a road of eerily abandoned palaces, each with its own enormous diwan.

It was a fun drive, filled with oohs and aahs and ‘remember thises’ and ‘remember when thats’. The place has expanded, of course, and the gaps between the buildings have filled in a little more. Tatty hoardings promote mega-projects that remain sandy wastelands – the massive, swooping waterways of the Blue Bay Nujoom islands appear deserted. Emaar’s ‘Umm Al Qawain Marina’ is a tiny estate of Dubai-style villas, a very strange drive away from the main road between hoardings (meant, presumably, to protect one’s sensitive eyes from the expanse of undeveloped sandy littoral around you) leads to the gated area of finished housing,  a microcosm of the much larger project originally planned all around it. Bearing the mildly egregious realestatesque (it IS a word!) tagline, “A costal paradise where life comes full circle”, the Marina was originally intended to be a 2000-acre ‘mixed use’ project rather than a slightly awkward cluster of beige villas in the middle of a vast sand-blown emptiness.

Whether and when the projects will become reinstated is, of course, a question.