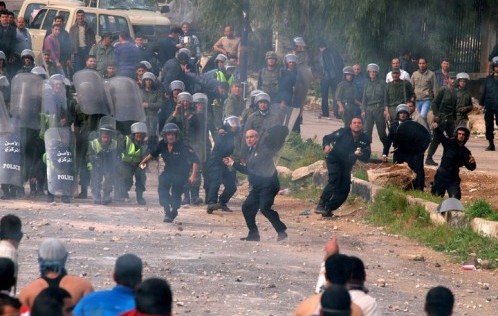 Sky News reports two separate anti-regime demonstrations in Syria — one in Idlib province, and the other in Hama — that swelled to 250,000 people apiece. Security forces opened fire, killing five and wounding a couple of dozen.

Those first two numbers are huge. The second two numbers are not. Think of it this way. If fifty people out of a half-million were shot, that’s only one in 5,000, or 0.0002 percent. It’s not safe to take to the streets and challenge the government, but it hardly means certain death or arrest anymore. Assad’s totalitarian stranglehold over his citizens has completely evaporated.

The security forces have enough firepower to massacre thousands per day if they’re given the orders to do so. That’s what happened in 1982 in the city of Hama. The government actually boasted about killing tens of thousands of people in one weekend alone.

We can only guess why that’s not happening today, but I’m reasonably certain it is not because Bashar al-Assad is more squeamish or less-determined to win than his father, Hafez al-Assad, who ruled the country in 1982. What most likely explains the government’s relative restraint is the fact that Damascus fears foreign intervention.

Assad knows if he kills fewer than 50 people a day he likely won’t be punished with anything more severe than isolation and sanctions. There is no real appetite in the Arab world, the West, or in Israel for armed confrontation. If the crisis can be kept at a low enough boil, Assad most likely thinks he can withstand it.

Syria’s opposition is overwhelmingly Sunni while the government is overwhelming Alawite. Massacring tens of thousands of unarmed Sunnis all at once would bring serious and credible accusations of genocide. Many governments in both the Arab world and the West would start thinking about and even discussing a military intervention to stop it. I slightly doubt Syria would be invaded even then, but it is possible, and it is Assad’s worst nightmare scenario.

So he’s “only” killing a few handfuls of people each day. He might be able to keep that up for years without bringing a regime-change from abroad down on his head.

There’s a problem, though, with that strategy. I am not better at math than the people of Syria. They, too, can compute that the odds they’ll be shot in a demonstration are only one in 5,000. Their incentive to hide under the bed rather than take to the streets is not large.

Dwight Eisenhower once said, “If you can’t solve a problem, enlarge it.” Sometimes that’s good advice, so watch out. Assad might try it and hope for the best.