The Ivy: Yet Another Dubai Disappointment 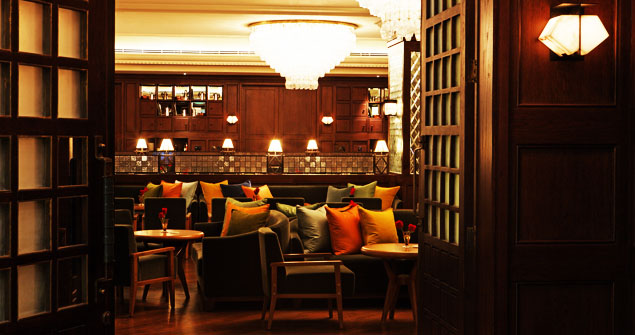 Have you ever found yourself in a famous restaurant, packed to the gunnels with shiny happy people, smiling and chatting, clinking glasses, twirling hair, eating unexciting food with inappropriate relish, and tapping toes to live elevator music? They’re in one corner – enjoying life, and you’re in the other, feeling bitter.

It’s entirely possible that I don’t understand the gentle nuances of the band.  It’s believably probable that because I ordered the three course ‘restaurant week’ menu (180AED, so much cheaper than going a la carte), I wasn’t going to get a fair representation of the restaurant’s signature style. It’s widely known I that I am far too particular with my wine. And yet, I still feel like I shouldn’t be the odd man out, that the other diners appear to be swallowing a package that is quite simply, overrated.

Maybe it’s just not my style. The Ivy is decidedly Old English – banquette seating bordered with screens of tessellated translucent glass. It’s dark. There are no windows, except for those that are sheathed delicately from the interior view of ‘The Boulevard’ (which, for those who don’t know Dubai, is not actually a boulevard, but a shopping mall) by diamonds of more opaque stained glass. It’s all white linen and red roses, dim and covert, rich without looking too rich.

Every accent around me is from off the continent. In London, The Ivy is an antique venue in the West End, history wrapped in celebrity. Here, it is new, made to look antique, and filled with Great Britain’s outcasts – the breed otherwise known as Colonial expats (and of course, the odd convict descendant, like me)

The chairs must have been stolen from the chambers of parliament – they’re comfortable, leather and designed to house old men with gout. The glass dividers remind me of my old local pub (The Retreat), where they were erected to form nooks for all degrees of secret shennanigans, or separate teams on trivia night.

The food is from that species formerly known as “gastropub grub” (like the pop star Prince, this cuisine will probably float around nameless until everybody realises that although they hate the previous name, it’s the only one that fits.) The napkins are like my Nanna’s tea-towels, and want to see a Victoria sponge cooling next to them as they both sit happily on a formica table in Mansfield. The winelist is brief, but contains an offering I am happy to choose from. If there was a fire crackling and I was in another (sub 40ºC) country, spending less that $40 on a glass of dessert wine, I’d probably be happy.

My soup was fine – cold tomato and basil with soft mozzerella – not rocket science, but well delivered. His salmon was beautifully poached, but served with a sauce attempting to cross cultures with elegance but ending up as balanced as an Aussie bogan in Emirati national dress. The rump was good, although ordered medium-rare and yet served blue. The cod with leeks sounded lovely, but both bland and a little too odorous – one would imagine hard to achieve simultaniously, but there you go.

The desserts – his, a bitter chocolate ganache, nothing wrong with it but hardly ground-breaking. My ‘lemon meringue coupe’, like the cod, had more bark than bite, and was two-thirds ill-matching vanilla icecream with a splash of (quite decent) lemon curd and a few shards of (delicate and tasty) meringue.

Wine is served in short-stemmed goblets also appearing like they have come straight out of a country pub. Large, but ill-shaped. When ordered by the glass, wine appears in an archaic fashion – not from the bottle, so you know you are getting what you asked for, but from a 1/4 carafe.

I count myself fortunate that I know what an 125AED glass of Saint Veran is supposed to taste like, otherwise they could have splashed in a bit of Jacob’s Creek Chardonnay and I’d be none the wiser. I’ve mentioned above that I am overly fussy with wine. Most people would not be bothered with this, and even I would not, if I was paying $5 a glass at my local tavern. But at these prices I need a little more pomp.

So – it sounds like I actually had a fairly good, of not great, feed, doesn’t it? So what left the sour taste in my mouth, especially when everybody else seems to be happy with the offering? It’s my old Dubai broken record – The label is shipped in, along with the entire concept. No great effort seems to have been made to make this a Dubai restaurant – it is simply another import. There are too many elements that get lost in the transplant.

The decor comes off a little contrived and inappropriate in this climate and in its shiny mall-side position. There are no celebrities to gander at while eating, making the prices unforgivable. There are no famous theatres nearby to bring an air of anticipation and art to the scene. The food offering is reasonable, but all in all, I don’t think it’s enough to keep people returning, especially more discerning drinkers and diners.

Or maybe it’s just me, and my taste… Time will tell.

One Response to The Ivy: Yet Another Dubai Disappointment