The Everyday Miracle of Building a Playground in Gaza 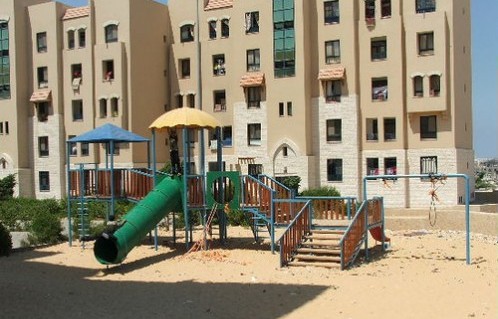 A “Hamas commander” drove a beat-up gray van in northern Gaza and theatrically spoke on his walkie-talkie as I sat in the passenger seat. The van was almost barren, save for the most basic equipment propelling it to move forward over the bumpy roads of an overcrowded refugee camp.

Iyad was not here to show me any militant training camp, or even to assess the damage that had befallen the impoverished Gaza Strip during Israel’s devastating war, Operation Cast Lead, which killed and wounded thousands in 2008-09. Scars of the damage sustained during the three-week onslaught are still visible throughout the Strip. Iyad was here to show me his latest personal project: a playground for refugee children.

At first glance, the “playground” did not seem impressive at all. All I noticed was a small plot of dirt jammed between two unsightly concrete buildings.

“So, what do you think?” asked Iyad, with a proud smile. His attempt at growing a full beard was not entirely successful, giving him a younger, albeit disheveled appearance.

“It’s impressive,” I replied, still trying to understand the nature of the accomplishment.

I learned later that the achievement was creating space out of the debris. At one time prior to December 2008, when an Israeli missile decided to drop in, a family had lived in this spot. The house had collapsed, and its residents became mere posters of mourned Palestinian faces adorning the walls of other houses in the neighborhood.

Iyad and few of “Shabab Al-Masjid” — youth of the mosque — cleared almost everything, using only their bare hands and other primitive means. The siege had made it nearly impossible to access modern technology to clear the uncountable tons of concrete scattered in and around Gaza as a result of the war. Cement remains a precious commodity in an area that needs building material above most other resources. People here somehow remain positive.

“And here will be a soccer field,” continued Iyad, who seemed to have no budget whatsoever, except the will of the “shabab”.

Predictably, Iyad’s residence is located in a refugee camp. What seemed to be a large crack around much of the house was in fact a mark left by an Israeli missile, which blew up most of the house. Iyad’s entire family — his brothers, their wives and about two dozen children — were watching TV in a room that miraculously managed to stay still as the house imploded. The neighbors rushed looking for dead and survivors, only to find everyone alive and well.

When the unmanned drone began circling above his head, Iyad knew that the Israelis had located him. So he began running.

“I didn’t want them to know where I lived, so I began running without a clear sense of direction,” said Iyad, who reiterated that he always prepared himself for such a moment. “I am not scared of death. Life and death is in God’s hand, not some Israeli pilot, but I worried about my family.”

Then, Iyad’s house came down.

Since then, the house has been rebuilt, although in a haphazard way. New additions to the house stand above the deep cracks. There are no guarantees that the foundation is safe, or if the house is even inhabitable at all. Oblivious to war, death, unarmed drones and shaky foundations, the children are full of life.

Three of the boys in Iyad’s household carry the same name. It was the name of Iyad’s brother who was killed by an Israeli sniper as he protested the occupation during the First Palestinian Uprising (Intifada) of 1987. It was this very event that changed Iyad’s life forever. In a moment, the little boy had become a man, as expected of any “brother of a martyr”.

Iyad’s niece — a cute girl in a checkered dress — was asked to perform her nashid, a song she had learned in the street. She did so with untold enthusiasm. The song referenced paradise and martyrs and “right of return,” and of children facing missiles with bare chests. The crowed clapped, and the girl huddled by my side bashfully. Perhaps she had not expected such a passionate response from her audience. She was five years old.

Iyad, who is now studying at a local Gaza university, already speaks of a Master’s degree and a teaching career. He also remains consumed by his playground and the challenges awaiting him and the “youth of the mosque” once the uneven ground is completely flattened.

His nieces and nephews sing for the martyrs, but they are also keen to do their homework. They discuss end-of-year exams with dread and excitement. All the boys are fans of Barcelona, and devotees of a man named Lionel Messi.

“When I grow up, I wanted to study physical education,” said one of the boys, a teenager of about 14. ‘I will specialize in soccer, just like Messi’s major at the University of Barcelona,’ he added excitedly.

I laughed, and so did everyone else.