Talk but Any Progress on Horizon for Saudi Women? 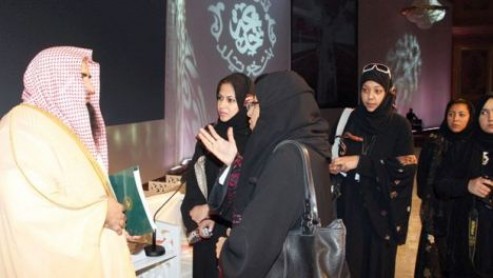 A two day forum which discussed the participation of Saudi Women in National Development concluded in Jeddah on 30 November.  I would be very curious to hear the views and perspectives of any American Bedu followers who may have had the opportunity to attend the event.  The event sounds like it was progressive and discussed a number of key issues of importance to Saudi women and their future roles and opportunities.  These topics included jobs for Saudi women and the need for an increased presence of women in the banking and information technology sectors; education and training and acknowledging that more Saudi women are increasingly appearing in television and radio programs.

Minister of Labor, Adel Fakieh acknowledged that women’s participation in development remains low due to social and organizational factors.  However he did not go into detail on the factors which impede the participation of women. He did state that a new mechanism will be in place within eight weeks which will regulate women’s employment, protect them from exploitation and punish violators.

According to the article, Deputy Minister of Education, Norah Al-Faiz, spoke on some of the challenges of women’s education yet the responses quoted in the article seem to only define the problems without addressing plans or solutions.  In response to the high risks associated with the travel of Saudi teachers to rural areas, Al-Faiz responded “such teachers want full-time jobs and should accept the consequences of their decisions. She also said the Ministry of Education has a responsibility to provide education to children in rural villages.”  But doesn’t the Ministry of Education also have a responsibility for its employees and their safety?

A surprise and well-received spokesperson at the forum was Shaikh Ahmad Al-Ghamdi, head of the Commission for the Promotion of Virtue and the Prevention of Vice in the Makkah Province.  He was the center of attention and received numerous questions from the women in the audience.  He addresses the queries directly and thoughtfully.  He responded to queries of khalwa, segregation and veiling.

Other topics addressed and discussed by panel members included the ease with which a man can receive a divorce and difficulties women face when attempting to deal with the judicial system.

The forum concluded with the following recommendations made by Maha Fitaihy, the forums chairperson to draw up of a national plan to improve the image of women, especially in the workplace, set up of a commission for women’s affairs, their inclusion in provincial government councils, set up of a committee at the Muslim World League to take care of women in Saudi Arabia and the Muslim world, and launch a television channel to promote the image and achievements of Saudi women to the outside world.

This sounds like it was an excellent forum with a packed agenda.  I really would like to hear from women who were in attendance and how much faith they have in the recommendations coming to fruition.  I query whether any kind of accountability has been put into place to follow up and monitor and track progress of the recommendations.  If these recommendations come to fruition it is a very good start for new initiatives and opportunities for Saudi Women.

But more importantly than my own musings, what do YOU, Saudi women and men think of this forum and its promises?