Super Makh: ‘Fearless In the Face of Female Harassment’ 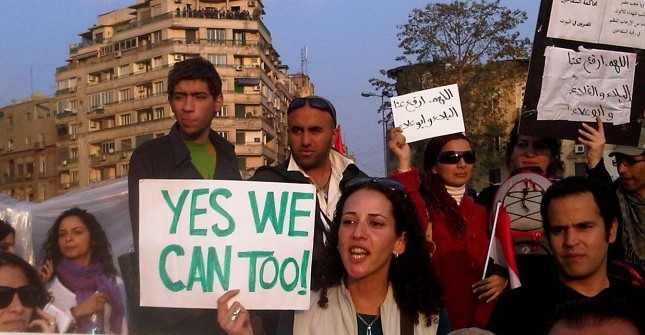 Dressed in floral print clothing, he needs cinnamon chewing-gum to fight against his foes and a long rest after his encounters – It’s Super Makh! Reappearing this year in the Egyptian comic publication Tok-Tok, Super Makh is the Egyptian version of Superman in a popular cartoon where his main mission is to the help women and girls stop their harassers.

Egyptian society – whether in Muslim or Christian communities – is relatively conservative for the most part and sex remains a taboo not to be discussed. Therefore, women are often embarrassed to complain about being a victim of sexual harassment. Claims of harassment that are brought to the attention of police usually receive a poor or inadequate response, leaving many women feeling that it’s pointless to ask for help. But if silence over the issue continues, nobody will tackle the problem.

Super Makh first appeared in Al-Dostour (an opposition newspaper at the time) in 2008. A study by the Egyptian Centre for Women’s Rights showed that more than 80% of Egyptian women were subjected to sexual harassment that year.

Ahmed Makhlouf, the cartoon’s creator, drew the first adventures of Super Makh in response to a shocking number of sexual harassment accounts in 2006 and 2008. In those two years, the joyous atmosphere of the Muslim Eid el Fitr holiday in the streets of big cities like Cairo and Alexandria gave way to horrible incidents of sexual harassment on a grand scale.

In addition to the fact that sexual harassment can be difficult to report, there are many factors that contribute to its prevalence and need to be addressed. Gender stereotypes and learned behaviour that teaches women to keep quiet about harassment they’ve experienced and brushes off verbal harassment are but a few. Super Makh brings these factors to the attention of Egyptian readers with situations characters face in the comic.

For example, blaming a victim of harassment for the manner in which she dresses is a typical pretext that resonates with some Egyptians due to distorted views on religion and women’s bodies. However, the cartoon shows that many women are bothered regardless of how they dress.

In the cartoon, the harasser “compliments” female characters just as a real harasser might on a street in Cairo. But the cartoon shows that these “sweet words” are actually perceived as aggressive by women. In contrast, Super Makh is respectful towards women. In this way the cartoon attempts to shift what is perceived as masculine from harassment to respect for women and their rights.

The girl who is a victim of harassment in the comic first calls upon Super Makh for help. But when approached by a second man, she fends for herself. In this manner the cartoon is teaching girls not to be embarrassed, but instead to speak out and stand up for their rights.

Makhlouf’s superhero has already made a difference in the real world by helping break the taboo and highlighting the reality many Egyptian women face daily. More importantly, efforts such as this show the younger generation that there is nothing fun or cool about harassing women.

Sophie Anmuth is a freelance journalist based in Egypt. Super Makh will feature again in Tok-Tok’s April edition