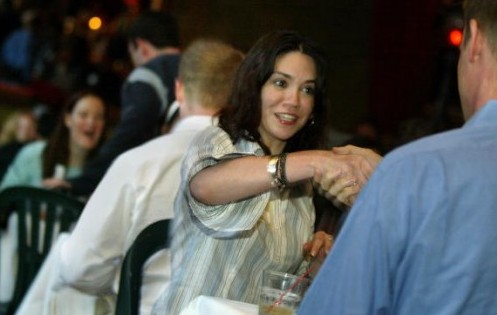 Moroccan women are either waiting much longer to get married, or are not marrying at all. According to official statistics the marrying age in Morocco has exceeded 27.2 for women and 31.8 for men. Statistical reports issued by the Le Haut Commissariat au Plan (The High Commission for Planning) also reveal that seven million adult women are unmarried, among them only 26,000 that have not exceeded 30 years old.

A Moroccan sexologist suggests speed dating as a means of solving the problem. Sexologist Mustafa Rasi, who works in the city of Oujda in eastern Morocco, argues that so much time is wasted in the pre-marriage stage and which involves several meetings between the man and the woman as well as between members of both families and long discussions of details. “At the end of all this, it is very likely that the marriage might not happen,” Rasi wrote in an article published in the Moroccan newspaper al-Massae.

To avoid the negative outcome of this process whose length contributes to the surfacing of more disagreements, Rasi proposed speed dating as the most viable solution. “In speed dating, meetings are to be arranged between men and women who have several things in common like age group, social status, educational level, and financial condition. They would sit together and talk over a cup of tea for no longer than seven minutes.”

After the seven minutes are over, Rasi explained, organizers of the group date would ring a bell and a swap is to take place between tables. “The women are to remain in their places and men would move to other tables so that each man and woman is able to meet several potential partners.” Rasi added that all participants are to write their feedback about each of the persons he/she met in one short sentence: “I want to meet him/her again” or “I do not want to meet him/her again.” The organizers would receive the feedback and sort all the papers to decide who wants to meet who again then contact the relevant participants for another date.

To make this practice acceptable in a conservative society, Rasi pointed out, it is permissible for participants to bring along a friend or a relative provided that this third party does interfere in the conversation between the man and the woman. Rasi called upon social organizations to start adopting this proposal and to encourage youths to engage in it. “This is a fast and safe option that would be very successful in Morocco and in the Arab world in general because it revives old customs in a more sophisticated form.” For Rasi, this option is also much better and more effective than other methods like internet marriages.

From the religious point of view, there is nothing in Islam that prohibits speed dating, says Sheikh Abdul Bari al-Zamzami, preacher and head of the Moroccan Association for Jurisprudence Research. “However, it is important that such a practice take place under proper supervision so that it does not end up violating Islamic principles,” he told AlArabiya.net.

Zamzami explained that public meetings of potential marriage partners are sanctioned in Islam as long as the girl is decently dressed. “It is preferable that the meeting takes place in the presence of the parents of the man and the woman in order to discuss important details.” According to the Moroccan preacher, speed dating might face some obstacles when it comes to application. “For example, what will be the criteria according to which each participant can determine if the other party possess the traits he/she needs in a wife/husband?”