Should There Be A ‘Standard Ramadan Time’? 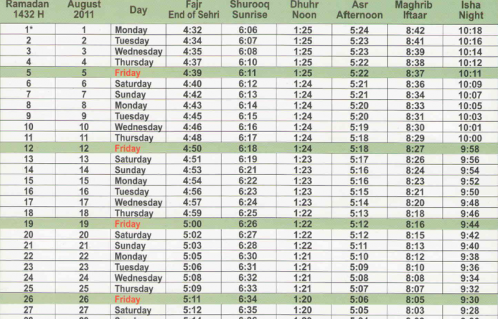 The thirty day Ramadan fast between sunrise and sunset is not simply about refraining from food, drinking, sex and smoking. It is a time for prayer and reflection. However, not all Ramadans are equal. The hours between sunrise and sunset may not vary much in places like Mecca in Saudi Arabia, but spare a thought for those living elsewhere. The problem is the difference between the Islamic and Gregorian calendars. As the Islamic calendar is eleven days shorter than the Gregorian, Ramadan moves back by that number of days each year.

Why is this a problem? Well, if you are a practising Muslim living in Sweden, Norway and Finland, for example, where the sun may not set until around midnight and rise again only a few hours later, the length of the fast and the lack of real sleep becomes a major health issue.

Reporter Murad Ahmed, writing in the Times, says it is also a problem for British Muslims who complain that fasting in August with sunrise at between 3am and 4am and sunset between 8pm and 9pm, means going without food and water for 16 hours a day! As he points out, “…nutritionists will say that though this may be good for the soul, it is not great for the body”.

Murad Ahmed recalls that when he first started fasting as a youngster, Ramadan was in the middle of December. “The sun set at about 4pm, perfectly timed for a meal after I got home from school”.

All the best medical advice is that you need to eat breakfast to restore energy after sleeping and to drink water all day to maintain concentration. Islam has been very adaptive when it comes to Ramadan. For obvious reasons, airline pilots are not allowed to fast and there are exemptions for pregnant women, the sick, the elderly, the very young and those travelling.

The rules that made sense in Arabia back in the 7th century are being adapted and scholars have suggested that to overcome the negative health consequences of extreme fasts, people in countries such as Finland forget about local time and simply fast during the hours of daylight occurring in Mecca. Many Muslims are now adopting this sensible approach.

What is so heartening about this is that with pragmatism and flexibility, Ramadan can avoid being a health risk and remain a time of commitment and inspiration.

One Response to Should There Be A ‘Standard Ramadan Time’?